The building of giant stadiums for international events is often seen as the zenith of construction. However, many argue that the cost of these mega-projects outweighs the eventual benefits as they continually struggle to make economic sense 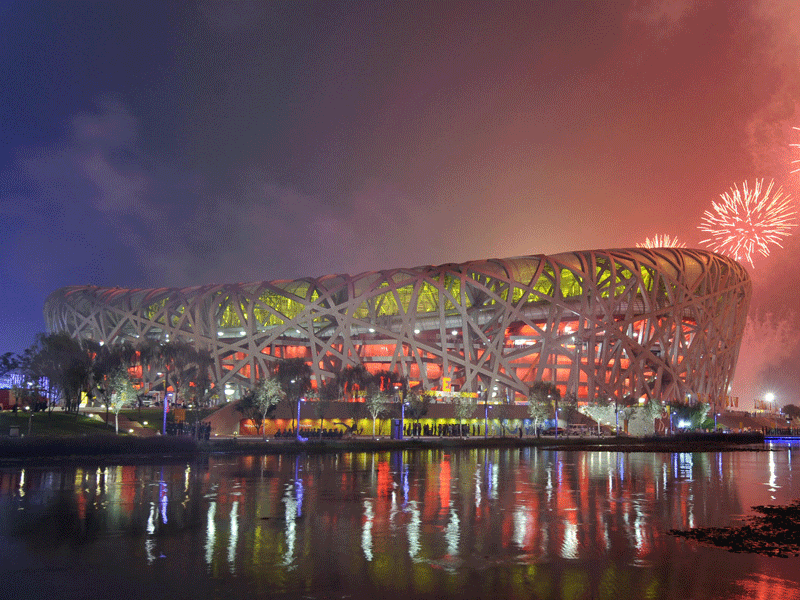 The opening ceremony of the 2008 Beijing Olympics. It is estimated that China spent around $45bn on hosting the Olympics a decade ago
Infrastructure | Real Estate
Author: Courtney Goldsmith

Earlier this year, the world was swept up in World Cup fever. Just a few months later, however, and the quadrennial tournament has already faded from our collective memory. Nonetheless, for 11 cities in Russia, a reminder of the tournament sits on their doorstep: enormous stadiums that cost billions to construct and operate.

Government subsidies should not be used to pay for new arenas, as estimations of their economic impact tend to be exaggerated by the failure to recognise opportunity costs

Russia wrapped up the most expensive World Cup in history in July, having spent around $14bn on stadiums, transport and other infrastructure, according to The Moscow Times. Hosting one of the world’s biggest sporting events could boost tourism figures – market research firm Euromonitor said the tournament would directly cause the number of travellers to Russia to rise by 1.4 percent in 2018 – but there are significant doubts over President Vladimir Putin’s calculations for the long-term benefits of the investment.

According to Deputy Prime Minister Arkady Dvorkovich, the World Cup will generate as much as $30.8bn for Russia over the next decade. Ratings agency Moody’s, however, described the economic benefit of playing host to the month-long event as “short-lived”. Around the world, plans for billion-dollar stadiums get the green light in the belief that they will increase economic activity, but is there truly any payoff in shelling out for an event like the World Cup?

Beware the white elephants
Most economists agree that sporting mega-events like the World Cup or the Olympics provide little to no economic benefit to the host nation. Victor Matheson, an economics professor at the College of the Holy Cross in Massachusetts, told World Finance that indicators such as employment, GDP or income fail to show a big uplift following an event.

In an annual phone-in with the public in June, Putin admitted that “a lot of money” was spent on stadiums and infrastructure to host the World Cup. The government also plans to allocate around $200m to help cities cover stadium costs over the next five years and to encourage youth football development following the tournament, but Putin has stressed the arenas should become self-sufficient.

Historically, Russia has struggled with stadiums becoming white elephants, and this looks unlikely to change, as engineering firm AECOM said in a research note: “It is very difficult to see how such stadium capacities can be economically sustainable without major changes in the supporter demographic.”

Andrew Zimbalist, a professor of economics at Smith College, Massachusetts, said there was “no basis” for Russia’s claim the event would generate close to $31bn. “The notion that there’s some important advertising effect here, it just hasn’t borne itself out empirically.”

Matheson agreed that, in his experience, this theory doesn’t hold up because governments tend to invest in things they don’t need, like airports that are twice as big as they should be or stadiums that will only be used a handful of times. There is also the pervasive idea that hosting a mega-event will put the host city or country ‘on the map’ – but this, too, fails to play out as expected. “It takes a very special circumstance for this to work, and I call this the ‘hidden gem’,” said Matheson. The key is to identify a truly underrepresented place that will continue to lure people in after the event is over.

This tactic has worked once: the 1992 Summer Olympics in Barcelona. The city did two things right, Matheson said: “First of all, it spent most of its money hosting the Olympics in general infrastructure improvements to the city as a whole rather than sports stadiums.

“The second thing is Barcelona really was, I think, a good example of a hidden gem.” While it’s “absolutely spectacular” to visit, few international tourists at the time had given it much thought, he said. This is more the exception than the rule, however. From this evidence, it seems Russia is unlikely to benefit much from the World Cup in the long term.

Bad economics
Matheson gave three reasons why local and mega sporting events fail to provide as big an economic boost as politicians promise. First is what is known as the substitution effect, which is when people in the local economy go to a sporting event rather than another form of entertainment with a similar economic impact. This just shifts money around, rather than creating a new economic impact. Next is crowding out, which occurs when congestion associated with a sports venue pushes away economic activity that would have normally occurred. For instance, an office building would not want to be located next to a major league baseball park because it would have to contend with large crowds for a significant portion of the year.

Third are leakages, which occur when money spent in the local economy does not stay there. For instance, when a consumer spends money on Super Bowl or Olympics tickets, the money is funnelled into the NFL’s corporate headquarters in New York or the International Olympic Committee in Switzerland. Another example of this is when hotel rooms near a big sporting event double or triple in price. Because the wages of the hotel workers are not also raised, these gains simply result in corporate profits, which go back to the company’s headquarters and its stockholders.

Location, location, location
To host the Olympics, a city must provide approximately 40 sporting venues, an Olympic village that can house around 17,000 athletes, trainers and coaches, and transportation links. “It’s very difficult for any city, or even a whole state, to find the resources to do all that building,” Zimbalist said.

But it is not as simple as categorically declaring the Olympics a bad investment. “Every economist out there will say that bringing the Olympics to Los Angeles was, flat out, a good thing,” Matheson said. The 1984 Summer Olympics in Los Angeles is considered the most financially successful iteration of the modern games: the event cost approximately $550m, or $2bn in today’s dollars, but the city managed to recoup the whole amount and even make a profit.

But for a country like Brazil, where virtually all of the necessary infrastructure had to be built from scratch, it is a very different story. The country spent around $13bn hosting the 2016 Rio Olympics, and that was just two years after it spent another $13bn on the 2014 World Cup.

It will never make economic sense to spend $13bn (like Brazil) or $45bn (like Beijing during the 2008 Olympics) or $200bn (which is what some estimate Qatar will spend on the 2022 World Cup) on a single sporting event. “It’s always about the costs and the benefits. If you can figure out how to do one of these big mega-events at a low cost, you should do it, but it’s all about what you have to pay for it,” Matheson said. Furthermore, even if the estimated cost of such an event is manageable for a city, the actual amount spent often exceeds the original budget.

Subsidy conundrum
More than half of the cost of building a stadium in the US, which ranges from $700m to $3bn, tends to be funded with public money. Zimbalist said taxpayers could cover up to 90 percent of the arena’s cost. A 2017 article for the Federal Reserve Bank of St Louis titled The Economics of Subsidising Sports Stadiums concluded that government subsidies should not be used to pay for new arenas, as estimations of their economic impact tend to be exaggerated by the failure to recognise opportunity costs. What’s more, in one study from 2006, 86 percent of economists surveyed agreed that local and state governments in the US should eliminate subsidies to professional sports franchises.

So how should stadiums be funded? Zimbalist said arenas that come along with larger commercial, retail and residential development projects could actually have a positive impact on the local economy if they are financed privately. These projects are able to bring in more ongoing activity by attracting new residents to properties or by encouraging new businesses to start up in retail spaces.

A case for mega-events
When confronted with this data, it is difficult to understand a sensible rationale for campaigning to host a sports mega-event or building a subsidised stadium. Of particular consideration is the motivation of politicians who sign off on these projects. While some may be under the impression that a new stadium will pay off economically, Matheson said many politicians become enthralled with the idea of hanging out with millionaire athletes and team owners – and what better way to do that than to build them a stadium? While that may be true for some politicians, cities might vie for the chance to host mega-events for more selfless reasons: sporting events make us happy.

A 2016 study titled The Host with the Most? The Effects of the Olympic Games on Happiness claimed to show the first “casual evidence” that the Olympic Games positively impacts local residents. According to the research, Londoners felt increased happiness and satisfaction with their lives during the city’s 2012 Olympic Games, particularly around the opening and closing ceremonies.

Matheson compared hosting a mega-event to holding a wedding: “The parents of the bride and groom aren’t throwing a big party at the wedding in order to make money on it. As a matter of fact, it’s exactly the reverse. But this doesn’t mean you shouldn’t have weddings… You should have a wedding because this is going to be a great, fun event for everyone. And that’s why you should agree to host a mega-event.”

While every expense does not have to turn a profit, it is important that decision makers recognise the economics behind building a new stadium or hosting a mega-event. In both cases, little to no economic uplift should be expected. It’s time politicians started being honest with the public about this, especially when taxpayer money is at risk.