The tide is turning on wave energy

While still a nascent market, wave energy is finally becoming a viable source of renewable power. With increased investment, new technology could change the way we harness the ocean’s potential 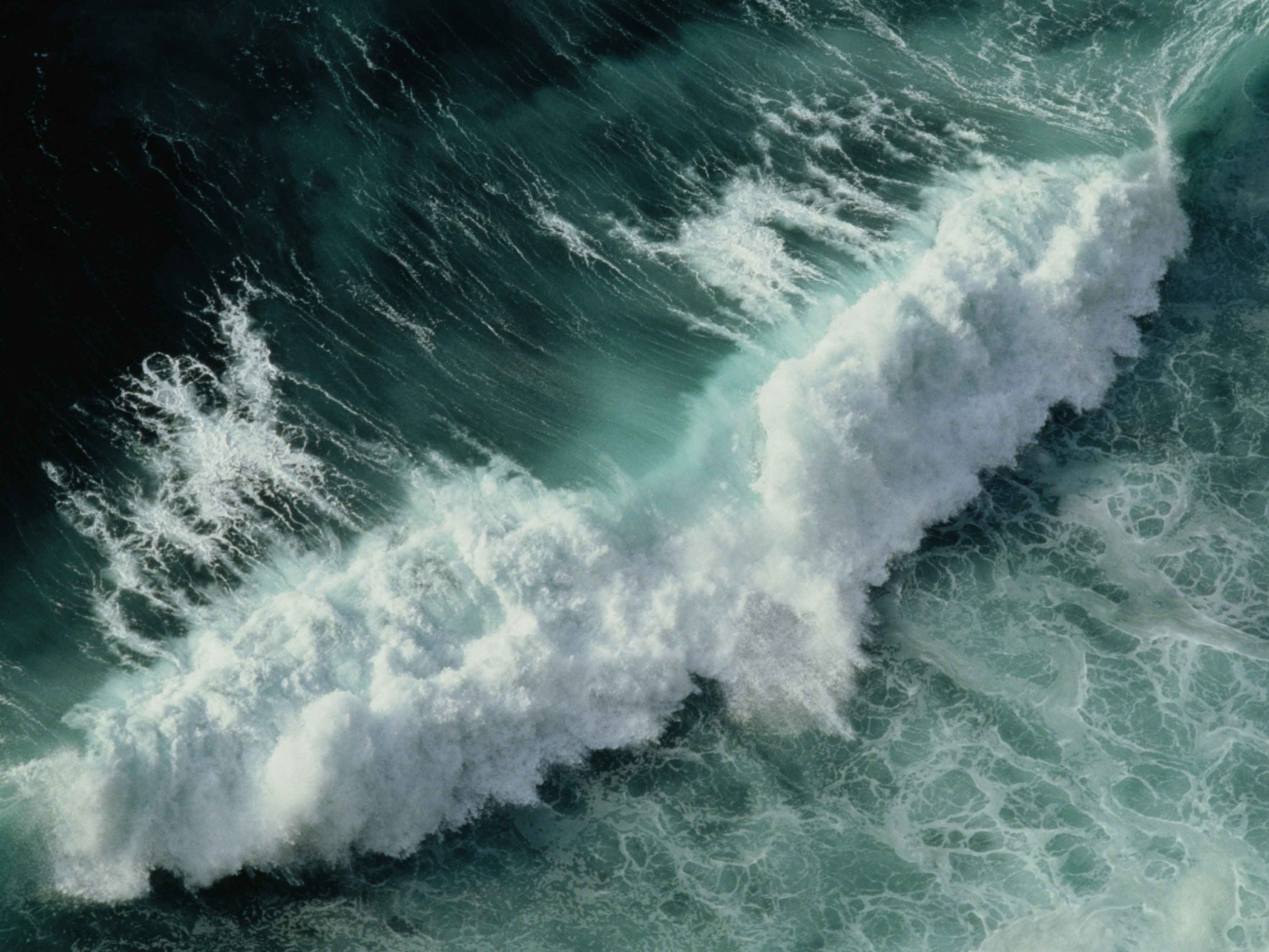 Wave energy works differently to tidal energy: instead of harnessing the ebb and flow of tides, wave energy works with the vertical movements that occur along the surface of the ocean
Energy | Featured | Markets
Author: Elizabeth Matsangou

The fight to reduce the pressure we place on the environment grows all the more urgent with every hour. Certainly, strides have been made when it comes to social awareness and the variety of ways in which we can reduce our heavy carbon footprint. But the road ahead still stretches far into the distance; the damage we have inflicted on our planet has already reached dire straits.

There is some hope to be found, though: for example, the field of clean power offers huge potential for progress. Investment in renewable energy continues to increase (see Fig 1), with solar, wind and geothermal power rightfully receiving a great deal of attention in recent years. However, there are other sources that also deserve their seat at the table, one being ocean wave energy, also known simply as wave energy. Not to be mistaken with tidal energy, wave energy is still a young market – but this lesser-known clean power is now turning heads.

The nascent sector brings many benefits, as explained by Adamos Zakheos, Inventor and CEO at Sea Wave Energy (SWEL): “Wave energy, when harnessed correctly, can produce an abundance of environmentally friendly, cheap, renewable energy, significantly reducing the dependence on fossil fuels. We all see the effects of global warming; by exploiting blue energy, nations can take a responsible step towards securing a brighter future for their citizens – and their heirs.”

The nature of wave energy means that equipment working on the surface of the ocean must be robust enough to withstand the roughness of the sea day in, day out

Working with the waves
While tidal energy harnesses the ebb and flow of tides, wave energy works with the vertical movements that occur along the surface of the ocean. Specialised equipment then captures the mechanical energy produced by this up-down movement and converts it into electricity.

Interestingly, wave energy is actually a form of solar power: when the Sun’s rays hit the Earth’s atmosphere, they heat it up. Around the globe, a difference in temperature naturally occurs, causing air to move from hotter regions to cooler ones, resulting in wind. As winds move across the seas, some of their kinetic energy is transferred to the water, creating waves. Essentially, wave power is generated by the action of the wind blowing across the ocean surface, which means it’s also an indirect form of wind energy.

“Devices called wave energy converters (WECs) capture and convert the wave energy to mechanical energy. The mechanical power can then be used to fuel a conversion process to other forms such as electricity, hydrogen or even pressure for desalinating sea water,” Zakheos told World Finance.

Fossil fuels are finite. Aside from the obvious issues that result from their limited supply, the energy source is also damaging to the environment: there’s the amount of land the infrastructure requires, the issue of waste disposal, toxic emissions, water pollution and the carbon footprint of the industry as a whole. Wave energy, on the other hand, is clean, abundant and renewable. And, as waves can be forecast several days in advance, the energy they produce is also predictable and consistent. The infrastructure itself comes with a host of positive features: WECs are modular, making them easy to set up, and expandable. They also help protect shorelines from erosion, as WECs disperse the power of waves as they crash into the coast.

Persistent obstacles
While the advantages of wave energy are plentiful, until recently, there have been several obstacles standing in the way of the sector’s growth. Zakheos explained: “The biggest challenge facing the wave energy arena is developing a WEC that can withstand harsh environmental conditions and can produce low-cost energy in vast amounts.” The nature of wave energy means that equipment working on the surface of the ocean must be robust enough to endure the roughness of the sea day in, day out, as well as any number of raging tempests. This requirement in particular has eluded those working in the field for decades.

The complexity of exploiting wave power has led to a host of different designs over the years: buoys that sit on the surface; meandering attenuators; and converters that are mounted onto the seafloor. “The effects of extreme weather conditions are directly relative to any device that is in conflict with the wave; floating and buoyancy devices tend to have a disruptive relationship with the wave,” said Zakheos. “In fact, in extreme weather conditions, some wave energy converters are temporarily decommissioned to avoid catastrophic damage.”

Experts argue that wave energy is where wind power was some 30 years ago: at the time, an optimum design had not yet been agreed upon. Decades of research and development, however, have resulted in the sophisticated turbines that are dotted across various landscapes today. When it comes to wave power, feet have been dragging for years now. While there was some initial investment into the field in the 1970s, since then, governmental and commercial research has been lacklustre, especially in comparison with wind energy.

As Zakheos explained, a failure to produce better results has led to this pattern of persistently weak investment, which was desperately needed in order to improve the technology. “The WECs produced over the years have failed to deliver time and time again. These failures, combined with the billions of private and public funds that were invested, have dampened investment appetite, resulting in a slower development curve for this type of technology.” Just swell
Zakheos believes that an essential misunderstanding about the movement of waves is at the root of such defeats. “Current [WECs] fail on so many levels, one being their conflicting nature with the sea wave. If you work in harmony and in cooperation with your partner, you will have a long and fruitful relationship. That’s exactly what we have achieved. We have managed to interact with the wave in such a way that we avoid conflict and work in harmony with the deployed area, even in the harshest of conditions,” he said, in reference to his design, the Waveline Magnet, which has been 12 years in the making.

He continued: “The Waveline Magnet is not a floating device as may be assumed, but is a near-zero displacement system, without the inertia-related disadvantages that are being faced by other WECs.” As such, the device does not come into conflict with waves, but interacts with them in a manner that is natural and fluid. Essentially, it adopts the movement and momentum of the waves, allowing the Waveline Magnet to work in even the bleakest sea conditions. In fact, the technology can take advantage of such states and increase energy production without impacting the durability of the device.

The Waveline Magnet is able to work in this manner thanks to its innovative design, which comprises a series of flexible assemblies, all linked by a malleable spine power system. “Our research and development has created a device that enclaves the surface of the sea, or the wave line, as we like to call it, becoming one moving dense mass with the contour of the wave,” said Zakheos. “This allows us to work in harmony and in synchronisation with the deployed sea area, regulating the loads imposed on a wave to achieve optimum energy extraction in a controlled and non-disruptive manner.”

Realising feasibility
As with other sources of renewable energy in the initial phases of their development, cost has been a major roadblock for the technology. In a bid to offset this challenge, the sector is now filled with small, nimble players making innovative strides – with occasional input from their respective governments.

SWEL, for example, hopes its design will alleviate the high development and upkeep costs that have been the main pitfalls of previous WECs. First, the materials and components used for the device can be supplied without the need for specialised production lines or vast supporting infrastructure. Tony Antoniou, Finance Director at SWEL, said: “This keeps the cost of production very low and, due to its modular, lightweight design, the cost of deployment and retrieval are also drastically reduced.”

Meanwhile, the robustness of the device, which is a consequence of its ability to move in conjunction with the sea rather than in conflict with it, means maintenance and repair costs are drastically reduced. And thanks to the modular design of the Waveline Magnet, repairs can be completed with ease. Further, general maintenance, as well as production and transportation, are logistically easier too. The latter allows the possibility of mass production with turnaround times that are remarkably short – ranging in weeks rather than months.

As waves can be forecast several days in advance, the energy they produce is also predictable and consistent

The components themselves are also environmentally friendly; the device is made from recycled materials that are themselves 100 percent recyclable, while seawater is used in the hydraulic system instead of oil. Despite this green approach, the materials are still marine grade, meaning the Waveline Magnet can be deployed in even the most active and extreme seas, alleviating another hurdle that has stunted the growth of the wave energy market until now.

In terms of output, the Waveline Magnet is able to harness the power of the sea at a far more efficient rate than WECs of the past. “Achieving power extraction from renewable sources at a cost lower than [that] of fossil fuels is a long-term dream for the renewable energy industry. Our testing results indicate that this can now be achieved using the power of the wave, producing mechanical energy at a cost of less than [one penny ($0.013) per kWh],” said Antoniou. “In regions with an average annual wave height of just one metre and five-second wave intervals, the Waveline Magnet is estimated to produce on average 1.5MWh or 500 tonnes of desalinated water per hour, using a device 20m wide [and] 200m long.”

He added: “We will now proceed to independently confirm and verify our scaled-up output calculations and values, establishing SWEL as the pioneer of wave energy, setting new frontiers and ultimately facilitating the replacement of fossil fuels with renewable sources of energy.”

The market still has a long way to go. At present, big-ticket investments continue to focus on tidal energy and offshore wind farms, such as the €6bn ($6.79bn) that’s set to be ploughed into the Irish Sea over the coming five years. This is largely thanks to the decades spent enhancing the technology. The end result is a design in which efficiency has been maximised and costs have been reduced, thus providing a clean energy power source that is both practical and feasible.

But that tide is now coming for wave power too. It’s taken a long time to get to this point, but the technology is finally at a stage that will allow the market to be taken more seriously. Investors are standing up and taking notice, and for very good reason: the potential of the sea is vast. It provides us with an abundant source of clean energy and, thanks to new advances in the field, WECs now come without the pesky problems of the not-too-distant past. Yes, we can expect great things in the years to come from our oceans’ waves – possibly, even, a solution to one of the greatest environmental quandaries we face today.