Once the most traditional of American industries, cattle rearing and beef production has been in swift decline while prices soar. Over the years, beef has gone from a food staple to a luxury good for millions of Americans, and it is not likely to revert back any time soon 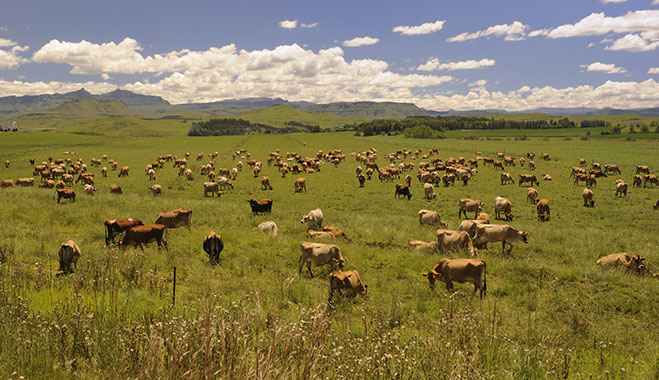 The US cattle herd is at its smallest since 1951, driving prices up and putting pressure on farmers to meet demand
Americas | Markets
Author: Rita Lobo

The hamburger is, in many ways, the quintessential American foodstuff – from the sweet white bun to the meaty beef patty. It has long been a staple in the diet of millions of Americans, for better or worse, and has evolved as a sort of shorthand for all-American culture.

Any soccer mom or college student will tell you that the key to a decent hamburger is the meat: fatty, flavourful, coarsely ground chunks of the finest Mid-Western beef the chef can lay their hands on. Simple and effective.

However, the humble hamburger is quickly going from food staple to luxury treat. The price of fresh American beef has been on the up for years and peaked this January at $5.04 a pound. Despite farming incentives and a healthy appetite in the market, the American cattle herd shrunk to the smallest it has ever been in 2013.

At the same time, export levels are soaring, having broken records last year, while the cost of meat in the US just keeps rising. For the first time in living memory, chicken sales have surpassed those of beef in the US.

Less beef, more demand
A number of factors are at play when it comes to the value of American beef, from market appetite to the weather in the Central Plains. And it seems that all of these factors have been conspiring to create less than ideal market conditions for the homegrown cattle. US beef production is forecast to drop over six percent in 2014, as cattle inventories shrink further.

However, global meat consumption is on the up, and shows no signs of slowing down. In 2013, a record 57 million tonnes of beef were consumed globally, and according the US Department of Agriculture Foreign Agricultural Service, 2014 is set to break even more records.

Exports are forecast to surpass 9.2 million tonnes globally, with India and Brazil leading this growth. The US remains the world’s biggest producer of beef, but with dwindling herds it is fast losing market share. Production is forecast to drop to under 11 million tonnes in 2014.

Though the US cattle herd has been shrinking for decades, the trend has accelerated markedly since 2007, and in 2013 plummeted to the lowest levels since 1951. The current slump started in 2007 as feed crises increased exponentially, leading to large financial losses for producers. Though prices have since returned to normal, herd numbers are yet to recover.

“While incentives have turned positive, they have not been in place long enough for the industry to begin registering signs of expansion according to USDA numbers,” Chris Hurt, an agricultural economist based at Purdue University, told Gary Truitt at Hoosier Ag Today. “The rebuilding of the beef herd is expected to take multiple years.”

Traditional industry
Though the cattle industry is still one of the most important in the US, the rise in the consumption of alternative proteins like chicken, fish and soy-based products, means that the market is increasingly complicated. Protein is a vital part of the human diet, so consumption is likely to remain stable even as prices increase.

The trouble for the beef industry is that while it once ruled supreme on the American plate, it is increasingly being substituted for other meats or vegetable products. People still have to eat, after all; but so do the cows that feed us.

Customers are certainly the ones feeling the pinch, and that eventually will affect sales and the value of a head of cattle, leading to an industry meltdown

Before a cow is slaughtered and butchered, it has been fed expensive grains for the better part of two years. It has been estimated that for every pound of meat it yields, the animal has consumed over 13 pounds of grain. Not only is this inefficient, considering humans often also eat similar grains, but it means that the cost of raising a cow can fluctuate wildly from year to year.

Since 2007, grain prices have been on the rise, especially in the US, where draught-plagued summers and bitter winters have punished the farmland, lowering production. The weather has also affected the grazing patterns of animals. Traditionally, cows are fed a mixture of grain rations and grass they eat as they roam the fields.

A severely dry summer in 2012 and the harsh winter of 2013 made it impossible for grazing to take place, both because it was too cold to leave the animals outside, and because the weather killed off the pastures. As a result, animals’ grain intake has had to be increased, at huge cost to farmers.

“They can’t eat wind, water and the scenery,” laments John Freitag, Executive Director of the Wisconsin Beef Council, in the Milwaukee-Wisconsin Journal Sentinel. At the same time, those adverse weather conditions have sent the price of grains soaring through the roof, leaving cattle farmers stuck in a double-whammy.

As a result, a huge number of animals have been sacrificed. In 2013, the US cattle inventory was down two percent from the year before, which may not sound like much, but the drop represents the loss of over one million cattle. And the decrease is increasingly problematic; 2012 had already been a record-breaking year, as the American cattle herd plummeted to its lowest in over 60 years. “There’s a million-plus head of cattle that just aren’t here anymore,” says Freitag. “Some guys just decided that it was easier to plant corn than it was to raise and feed cattle.”

It might seem counterintuitive to note that beef prices have remained high, even as all the beef from the cull hit the market, but domestic and international has been soaring, even as the American herd shrinks. This means that while raising and feeding cows has certainly become more expensive, the price per head of cattle has actually increased.

“It’s certainly a good time for the beef industry,” Amanda Ralke, a fifth generation rancher from South Dakota, wrote in Beef Magazine. “Bull sales have been on fire. Cull cows are worth a pretty penny. Just try buying a bred heifer these days; an open cow is pretty costly to replace.”

Customers are certainly the ones feeling the pinch, and that eventually will affect sales and the value of a head of cattle, leading to an industry meltdown. According to Hurt and Truitt, “some cow/calf operations will see 2014 as the golden opportunity to get out with record-high cow prices. But the greater tendency will be for producers to hold on to the cows for the profitable opportunities that are expected over the next three or more years.

“The price outlook [for the beef industry] is extremely favourable for 2014-16. Beef supplies this year are expected to be down five percent, while domestic demand is expected to remain positive.”

Chicken dinner
At the beginning of March, Ralke could buy a whole fresh chicken for around $0.69 per pound, when a pound of 93 percent lean beef mince would have set her back $4.99 a pound on the say day, and a prime cut would have fetched something in the region of $12.99. So while it is understandable that prices should be climbing so fast, given the market circumstances, it will still be a bitter pill to swallow for American consumers, long accustomed to cheap, good quality beef.

“The cost of meat has gone up significantly – 30-40 percent and in some cases 50 percent – in the past five to seven years,” Jeff Sindelar, an Associate Professor who specialises in the meat industry at the University of Wisconsin-Madison, told the Journal Sentinel. “The growth of the middle class in developing countries probably has more to do with the increase in demand and related prices than anything else.”

The situation in America is not being helped by the fact that the production of beef in other competing markets is rising fast. According to USDA, production in the EU, China, India, Argentina, Uruguay, Paraguay and Brazil are all set to increase, bringing millions of tonnes of beef to the international market. The USDA has proposed lifting a ban on fresh beef from 14 Brazilian states – something it had been previously reluctant to do because of concerns over foot-and-mouth disease.

Expensive tastes
However, this is unlikely to change, as cow meat generates such a wide array of meat products – from fresh steak to frozen lunch meats – that many countries rely on different types of imports to satisfy this very diverse need.

“The US is the largest producer, the largest consumer, the third-largest exporter and the largest importer of beef in the world,” Derrell Peel, Oklahoma State University Extension Livestock Marketing Specialist, explained to Beef Magazine.

He added that the US is such a large import market because it is by far the largest producer of hamburgers, a product that requires a lot of lean meat, which must be imported at lower costs, as the majority of lean US produced beef is sold as prime-cuts. Cheaper imports make up the difference in the humble burger.

The hamburger is clearly a sign of a deeply problematic industry. It is not efficient to feed cows to high standards of lean meat, only to grind it up into patties and other processed beef products. But at the time, consumers are increasingly reluctant to fork out the excessive costs of for a pound of premium steak. Though there has not been a cultural shift away from beef yet, it is only a matter of time – at which point the industry will have to reorganise itself and accept the ‘luxury’ label, or dump the quality of the product.

The latter would have drastic consequences, not only for farmer’s bottom lines, but for the health of the nation, which is already struggling with the effects of poor diet and nutrition standards.

The hamburger has evolved from a Friday night and summer afternoon staple to a luxury product that will soon be unaffordable to many Americans. Prime steak cuts have long since been reserved for treat days, and the trend is not likely to reverse anytime soon.

Consumption levels of US beef are already declining slowly, but the nation’s taste for beef remains unabated – if families can afford it they will consume beef over any other protein product – but there will come a time when even the most extravagant consumers will balk at the sight of the price for a pound of beef. And that day could come sooner rather than later, and then it will be no use crying over spilt milk.