US dollar falls under Trump’s presidency

With the US dollar continuing to drop in value, Donald Trump is discovering that political uncertainty has economic consequences 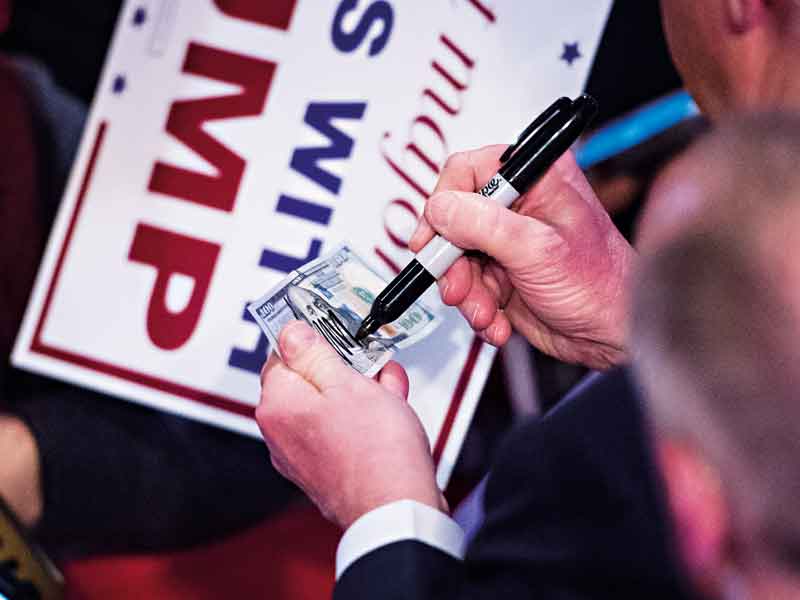 The almighty dollar is struggling. The currency has lost 10 percent of its value so far in 2017, marking its worst start to a year since 2002. Although currency fluctuations are inevitable, the dollar is now falling in the context of market conditions that are historically associated with an increase in value.

Geopolitical tensions, such as the ongoing military standoff with North Korea, usually see markets rushing to support safe-haven currencies like the dollar.

The fact that the US is involved in much of the ongoing international friction may be reason enough to undermine these historical norms, but other factors are also at work.

Current monetary policy at the US Federal Reserve would also traditionally be seen as supportive of a strong currency. Interest rate rises and the announcement that the Federal Reserve will start to reduce its balance sheet would normally see the dollar increase in value. These are not normal times, however, and the evidence suggests that currency markets did not envisage the impact of the new US president.

Words have consequences
Donald Trump’s surprise election win saw the dollar surge following campaign promises of substantial economic reform. However, proposed tax breaks for businesses and infrastructural spending have not materialised, with the Trump administration facing sustained resistance in Congress. And, as the market’s confidence in Trump’s economic policies has dwindled, so has support for the dollar.

In addition, Trump’s provocative rhetoric is only fanning the flames of economic uncertainty. Threatening to unleash “fire and fury” or shut down the government does not inspire market confidence.

“The decline in the dollar is at least partly attributable to growing concerns about political risk for the US, with the failure of healthcare legislation, the possibility of a budget standoff and, most recently, further political uncertainty following the Charlottesville events,” explained William Cline, Senior Fellow at the Peterson Institute for International Economics.

On the other side of the coin is the bullish performance of the euro, which is exacerbating the dollar’s decline. “The larger move against the euro reflects considerable improvement in political risk in the eurozone, given the outcome of the French elections and the easing of concerns about Italian banks, as well as an improved growth outlook in Europe,” Cline added.

Time to worry
In a typically bullish interview with The Wall Street Journal in April, Trump remarked: “I think our dollar is getting too strong, and partially that’s my fault because people have confidence in me.”

Putting aside any assessment of his popularity levels, Trump is right to suggest that a strong currency is not necessarily beneficial to a country’s economy.

In the short term, for example, a weaker dollar means that US goods and services become more attractive to foreign markets, which could provide a boost to the country’s manufacturing industry and other major exporters.

“An easing in the dollar can help keep the US trade deficit from widening as much as it would have at its previous exchange rate,” explained Cline. “In trade-weighted terms and adjusting for inflation, the real dollar declined about seven percent from December to August. That would curb the trade deficit by about 1.2 percent of GDP, from where it otherwise would have reached in the medium term. That is a plus for growth.”

Between January and September, the value of the dollar index fell

There will be concerns, however, that the fall in value is not simply the natural ebb and flow of the currency market, but an indication that the dollar is losing its status as the world’s chosen safe-haven currency. Cline, however, believes that talk of a US dollar collapse is premature.

“The dollar is still about 10 percent stronger than its average level between 2007 and mid-2014, when it started to rise in the face of falling oil prices,” he explained. “It is not yet time to worry about the dollar being too weak.”

And yet, some analysts are worried. Further uncertainty is scheduled for February next year, when Federal Reserve Chair Janet Yellen steps down, and ongoing international tensions show little sign of abating.

Could continual decline indicate a long-term lack of confidence in the dollar? History would suggest not – the dollar has been in worse positions than this and recovered – but with a political outsider like Donald Trump in office, maybe history doesn’t quite count for as much as it used to.