The French president and German chancellor established a commitment to cooperation, and voiced support for potential changes to the European treaty 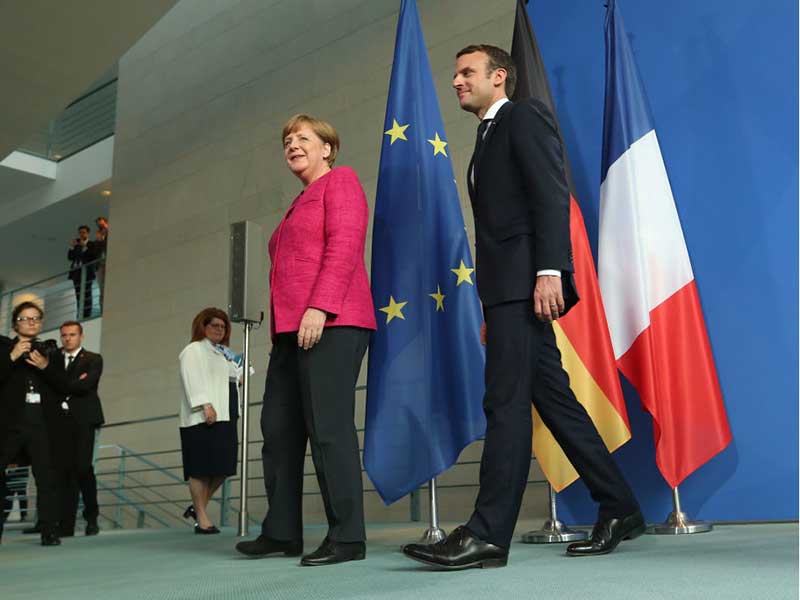 On May 15, newly elected French President Emmanuel Macron underscored his deep commitment to the European project by using his first full day in office to meet with German Chancellor Angela Merkel in Berlin. Representing two of the largest economies in the eurozone, the Franco-German relationship has long been regarded as a key driver of closer ties within Europe. Upon the election of a resolutely pro-EU French president, the alliance is poised to reinvigorate the integration of the bloc.

At a press conference held after the meeting, Merkel said: “I believe we are at a very sensitive moment in history that we should now also take advantage of – to make something of it that will be understood by the people as a strengthening of Europe.” She also emphasised the two leaders’ shared commitment to strengthening the EU and eurozone.

While the prospect of changing the treaty has long been a French taboo, Macron said this would change under his leadership

Macron, for his part, highlighted his intention to use his presidency to give new momentum to European integration, calling for a “historic reconstruction” of the bloc. He said while the prospect of changing the treaty had long been a French taboo, this would change under his leadership.

Notably, Merkel deviated from her previous stance on the subject, asserting she would be open to a treaty change “if it makes sense”. Merkel even went as far to say she would be willing to personally push for a treaty change if it was necessary, and rebuffed those who continue to reject any such change. She said: “The entire world is changing and we declare that we have exhausted ourselves once and that’s it for our entire lifetime.”

While the meeting has certainly set the tone for future cooperation between the pair, it produced little in the way of concrete proposals for the reconstruction effort. Macron’s vision for Europe includes aspects that will certainly prompt resistance from Germany, particularly as the country approaches its upcoming general election.

For one, Macron has suggested the establishment of a shared budget provision to act as a support mechanism for eurozone countries in economic distress. Similar proposals to pool resources have historically proved unpopular with the German public.

However, the policy may have found some unlikely footing with German Finance Minister Wolfgang Schäuble. Schäuble, known for being fiscally conservative, recently suggested he is theoretically in favour of making greater transfers to struggling states. In an interview reported by The Guardian prior to the meeting, Schäuble said: “A community cannot exist without the strong vouching for the weaker ones.”