Macron lays out hopes for a closer EU

In a speech crammed with policy recommendations, French President Emmanuel Macron has painted his vision for integration in the European Union 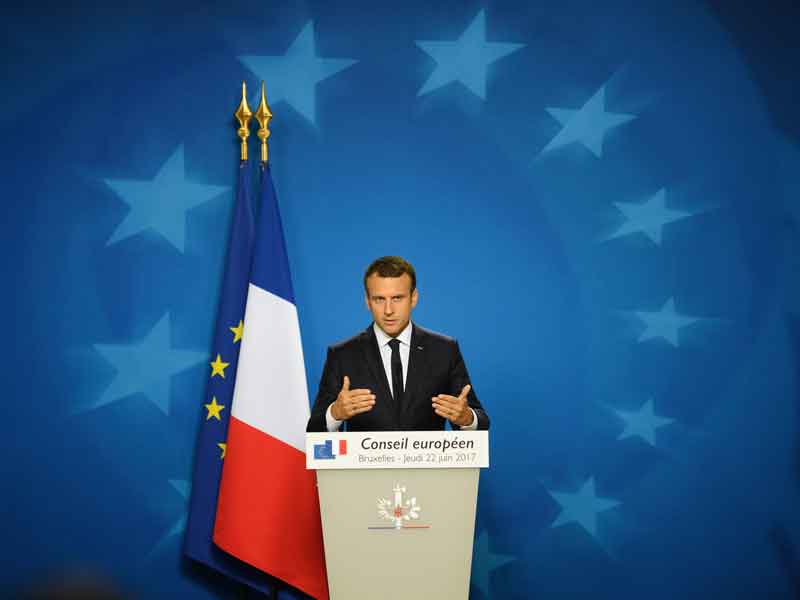 Macron expressed his desire for close relations with the EU at the European Council summit in June. His plans haven't wavered in the months since the summit
Government policy
Author: Kim Darrah

On September 26, French President Emmanuel Macron described his vision for sweeping reforms of the EU, in a speech that laid bare the extent of his ambition for the bloc. Packed full of far-reaching policy recommendations, the speech lasted almost two hours and pushed for the EU to work more closely on defence and immigration, as well as reiterating his call for deeper fiscal integration.

Outlining his proposal for far-reaching fiscal reforms, Macron said a joint European budget would be necessary to “finance joint investments and assure stability when confronted by economic shocks”. His proposed European budget would be funded by corporation tax receipts and supervised by the newly created role of Finance Minister: “A budget can only go hand in hand with strong political leadership led by a common minister and a strong parliamentary supervision at the European level.”

On the subject of taxes, he called for the establishment of a common corporate tax band as well as a reinvigoration of the debate surrounding a financial transaction tax. Further to this, he criticised the “inefficiency” of carbon prices, arguing that a carbon tax would be “indispensable”.

Addressing immigration, he pushed for a “European asylum office” that would act to accelerate and harmonise immigration procedures: “It is only with Europe that we can efficiently protect our borders and welcome those who need protection in a dignified manner, and at the same time send back those who are not eligible for asylum.”

On defence, he set out his vision for a joint civil protection force. “At the beginning of the next decade, Europe must have a joint intervention force, a common defence budget and a joint doctrine for action,” he said.

Other significant proposals included the creation of an “agency for creative disruption” and an overhaul of the common agricultural policy.

Macron’s speech came shortly after European Commission President Jean-Claude Juncker’s state of the union address, in which he said that he felt that the coming 12-18 months would provide a “window of opportunity” to push through reforms in Europe.

Italy’s EU Affairs Minister, Sandro Gozi, expressed optimism that the speech would inspire action on the part of European lawmakers. “An excellent speech by Emmanuel Macron on reviving the European Union. Let’s work on this together, starting tomorrow at the Lyon Summit,” he said, as quoted in Reuters.

However, the result of the German election two days ago has once again stoked fears over a surge in right-wing support. It has also pushed Angela Merkel into a new coalition that may limit her room for manoeuvre on Europe.