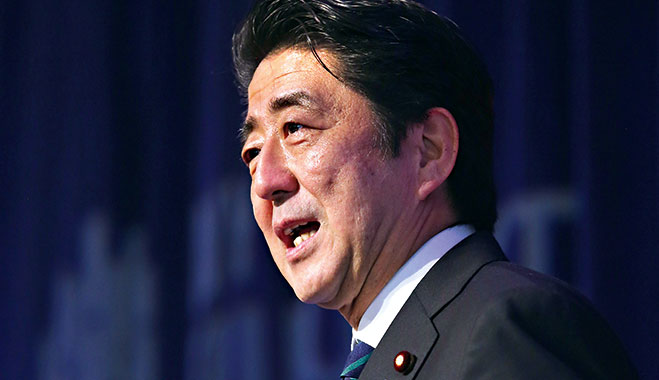 Shinzo Abe: The Japanese prime minister has been praised for having the first administration that has 'even mentioned women's participation'
Corporate Governance | Strategy
Author: Rita Lobo

Women in North America and Europe have been vital participants in since the 1960s. From then, women have gone from housewives, to clerical workers and finally to top executives. It would be foolish to say that the glass ceiling has been shattered, but a window up there has certainly been cracked open.

Figures vary from country to country, with Scandinavia topping the list for gender equality, according to the Global Gender Gap Report by the World Economic Forum, with other European countries following suit. Though wealthier nations tend to be more equal when it comes to gender, there is one notable exception: Japan (see Fig. 1).

Coining the term ‘Womenomics’
In 1999, analysts at Goldman Sachs led by Kathy Matsui concluded that Japan could increase its GDP by as much as 15 percent by bringing more women into the work force and closing the gender abyss that has formed in the Japanese labour market. Now, more than 14 years since Matsui’s legendary exposé of gender politics in Japan, things are finally beginning to change. The term ‘womenomics’, lifted from Matsui’s paper, is finally part of the Japanese political lexicon. And, ironically, it was a man who put it there. Womenomics are a vital component of Prime Minister Shinzo Abe’s much lauded reform plans, affectionately known as Abenomics. Abe is committed to modernising the Japanese economy, long plagued with deflation and slow growth, and he insists that his goal of bringing Japan back to the foreground as an economic powerhouse will not be achieved without “tapping into its most underutilised resource: Japanese women.” Abe insists that his policies are all about empowering women. “Japan is a country with a shrinking population caused by a seemingly intractable decline in its birth-rate. But womenomics offers a solution with its core tenet that a country that hires and promotes more women grows economically, and no less important, demographically as well,” Abe wrote in his very well received op-ed column in the Wall Street Journal.

“My government’s growth plan forecasts that a two percent increase in productivity over the mid to long term will produce, in 10 years, an average of two percent in real GDP growth and three percent in nominal GDP growth,” he wrote. “To achieve this, we must capitalise on the power of women. We have set the goal of boosting women’s workforce participation from the current 68 percent to 73 percent by the year 2020. Japanese women earn, on average, 30.2 percent less than men (compared with 20.1 percent in the US and just 0.2 percent in the Philippines). We must bridge this equality gap.”

So far, Abe’s concrete plans for bringing more women into the workforce are still a little vague. When women joined the labour pool in Europe and North America in the 1960s and 70s, it was largely because of the contraceptive pill becoming available, allowing women to plan when and how to structure their families and careers. Birth control is already widely accessible in Japan, and yet women still don’t always choose to work. The prime minister has suggested that he will expand day-care provision to allow mothers to return to work after giving birth. In a speech to the UN General Assembly, Abe has vouched to implement an official development assistance programme in excess of $3bn over the next three years, with the aim of addressing women’s participation in society through health, medical care, and prevention and resolution of conflict related to women.

Japanese women seem to have responded positively to Abe’s plans, but they have been demanding better infrastructure and provisions for working mothers for a long time before Abe came along. In February, Ryo Tanaka, Mayor of Tokyo’s Suginami Ward, revealed that 2,968 families had applied for state authorised day care facilities, 400 more than the year before and 1,800 more than the state can cope with. In June, a group of women rallied in Tokyo demanding more public day care. Tanaka announced emergency measures to cope with the shortage of child-care spaces shortly after the protests. “I think the mothers were placed in a situation where they felt they had no choice but to raise their voices to be heard,” a Suginami official said. “We must earnestly listen to the urgent concern raised by these mothers, who need to go back to work and also raise children.”

A conflict of interest
Though the higher echelons of Abe’s government might be gearing up to meet these demands, Japan remains a deeply conservative society, and even innocuous calls for more free child-minding have been met with aggressive opposition. After the June 2013 protests, a number of political commentators took to the internet to express their displeasure at the thought of women leaving the home to work.

“What I am saying is don’t force your child rearing on society from the start,” read a particularly vitriolic blog entry by Liberal Democratic Party (Abe’s own) member, Yutaro Tanaka. He added that while he agreed that “women power” was necessary to boost the economy, the women who took to the streets to demand better support “had no touch of reserve nor shame.”

Though Yutaro Tanaka has been particularly vocal about his opinions, he is by no means alone. The trouble for Abe is that a number of high-ranking politicians and prominent businessmen still share these traditionalist and conservative beliefs. “Their view of women is basically as tools to boost the birth rate, reduce social security spending and increase growth. Women have a role because they are key to solving these three problems,” Mari Miura, a political science professor at Sophia University in Tokyo, told Reuters. “But they have a strong idea of the traditional family as a core ideology of conservatives. That ideology and reasonable solutions do not match, so the policy is always schizophrenic at best.”

But it is undeniable that when it comes to employment rations, Japan still lags behind in all key World Bank Gender Gap indexes. It ranks 104th in the world for female participation and opportunity, despite women and men scoring equally in literacy, primary and secondary education, and woman surpassing men by far in life expectancy.

Cracks start to appear at university level, where significantly less women choose to attend, and the gap gets persistently wider at boardroom level; so few women are on the boards of listed companies in the country that the World Bank could not compile a figure, and the same is true for firms with female participation in ownership.

Realising the only option
But Abe is well aware that in order to achieve greater female participation in the workforce, it is not sufficient to simply tackle the issue at the top. He will not be enforcing positive discrimination for women in boardrooms, for instance, but will instead follow the work the Jiro Aikawa, a Japanese development specialist working with young female African farmers. “Through his involvement in African agriculture, he has succeeded in doubling the incomes of 2,500 farmers in Kenya. Africa’s agriculture will not grow strong unless Africa’s women are first empowered, and unless Africa’s agriculture is made robust, Africa itself will not thrive. This is his conviction,” Abe wrote in his Wall Street Journal column.

“One of Aikawa’s strategies is to promote women farmers’ understanding of the consumer market. The goal is to move beyond agriculture that merely enables the farmer to eat, to agriculture that enables the farmer to earn money.” Though Abe’s bottom-up reforms might help women onto the first step in the career ladder, corporate culture in Japan remains entrenched in its regressive attitude towards women climbing the rungs after that.

Though a number of large corporations have been publicly enforcing diversity policies as a way to boost profits, Keidanren – a big business lobby group – has blocked a proposal to make it compulsory for large companies to disclose gender statistics. While increasing female participation in the labour market will lead to growth in the long-term, Abe is still facing growing public debt and some measure of economic uncertainty. It will be a challenge for Abe’s government to find the funds to cover the reforms he has promised.

However, the economic possibilities of Abe’s womenomics might prove too irresistible for even the staunchest traditionalist to resist. In a recent interview with Reuters, Matsui reinforced that her findings of 14 years ago, and insisted that despite the opposition, Abe is doing the right thing. “It’s the first administration that I can think of that even mentioned women’s participation. So that’s a step forward. Obviously, this is going up against a tidal wave of potential opposition, but at the end of the day, what other choice do they have?”