With private equity funds sitting on record levels of capital and conditions in many industries suggesting consolidation, some huge mergers may finally take place in 2015 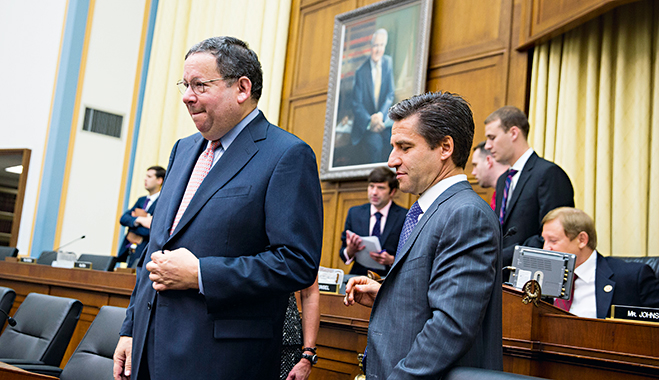 David Cohen, Executive Vice President of Comcast (left), and Robert Marcus, Chairman and CEO of Time Warner Cable, at the start of a House Judiciary Committee hearing on the proposed merger between the companies
Wealth Management
Author: Jules Gray

Last year many in the private equity industry expected to deliver huge opportunities for profits, thanks in large part to a series of mega-mergers across a number of global industries. There was the planned $45bn merger between Time Warner Cable and Comcast and a $48.5bn pairing of telecom firm AT&T and cable provider DirecTV, both of which are currently being scrutinised by regulators. Deal activity for the year reportedly surged to $2.5trn, representing a jump of 47 percent on 2013. In Europe, that figure hit 55 percent, while across Asia there was activity of $716bn, the largest ever figure the region has secured.

However, while many mergers were touted in the press and record levels of mergers and acquisitions were completed, 2014 also saw a number of touted mergers fail to materialise. In healthcare, US pharmaceutical giant Pfizer attempted to seal a £53bn ($81.28m) purchase of UK firm AstraZeneca early on in 2014, only to be rebuffed by shareholders and politicians. Another mooted US takeover of a British firm was the $54.8bn offer biopharmaceutical company AbbVie made for Shire. This collapsed months later after a series of changes to the US Tax Inversion law that made any large overseas moves by American firms much more costly to complete.

As a result of these M&A failures, many private equity funds that had been looking at deals have kept their powder dry, accumulating large pots of cash. Many observers now expect the coming year to see this capital deployed into a number of industries that seem ripe for consolidation. These include oil and gas providers, who are facing the difficult after-effects of a dramatically declining oil price, and many telecom firms.

Robert Leitão, Head of Global Financial Advisory at Rothschild, told the UK’s Daily Telegraph newspaper in December that while there had been plenty of excitement last year over potentially huge deals, the reality was that very few were actually completed: “There is a huge gap between the column inches and the number of completions. Some of the biggest deals, which created the most excitement and confidence, were the ones that also created the most disappointment when they failed.”

Record levels
Private equity funds managed to raise huge sums of money in anticipation for deals, only for them to send up sitting on their pots of cash. This fundraising was thanks to a solid level of returns seen by funds the previous year. Preqin, the private equity industries leading analytical firm, released report at the beginning of 2015 that shows the level of competition within the market for deals. Christopher Elvin, Preqin’s Head of Private Equity Products, said that record returns in 2013 meant that last year saw high levels of fundraising within the industry (see Fig. 1). “The record levels of capital returned to investors in 2013 helped to facilitate another healthy year of fundraising in 2014, with $495bn of aggregate capital raised by 994 funds over the course of the year.”

He added, “2014 also saw a $128bn increase in dry powder since December 2013, and combined with an increase in unrealised value of portfolio assets, the industry’s total assets under management stands in excess of $3.8trn. As of January 2015, there were 2,235 funds looking to raise an aggregate $793bn; when compared against 2014 fundraising figures, this gives a clear indication of the level of competition currently in the market.”

According to Elvin, the private equity industry enjoyed the largest returns from exits it had ever seen during 2014, thanks to the improving global economy. “Improved market conditions in 2014 resulted in the highest ever aggregate exit value for private equity buyout fund managers, with a total of 1,604 exits globally valued at $428bn, 30 percent more than the total value of exits in 2013. This meant that as of June 2013 (the latest data available) $224bn had been returned to investors in buyout distributions, nearly the same as the full-year 2013 amount of $226bn and significantly more than total capital called resulting in on-going liquidity for investors.”

However, despite the large amounts of capital swilling around the industry, there has been a knock on effect that has meant it is even more competitive than usual to get the best investments. “There is on-going concern that high dry powder levels are increasing competition for deals, making it harder for general partners to find attractive investment opportunities, which may ultimately impact returns”, says Elvin.

These sentiments are echoed elsewhere in the industry. Some industry experts believe that the large amounts of capital sitting unused in funds means that there is much more competition for investments. Henry Talbot-Ponsonby, co-founder and Managing Partner of London-based venture capital advisory firm VCP Partners, told World Finance that all this competition will likely have an impact on both the investment price and eventual returns. “With so much dry powder in the market, competition for the best deals is rife, and this has the effect of pushing entry valuations up, which will ultimately impact on fund returns.”

Oil opportunities
One industry that is expected to see a lot of deal activity over the next 12 months is oil and gas. According to a report released in December by consultancy firm PricewaterhouseCoopers (PwC), the oil and gas industry is likely to experience considerable consolidation this year, thanks in large part to the collapsing price of oil during the last six months. “Oil prices remaining at the current level for a sustained period will light the touchpaper for mergers and acquisitions in 2015”, said PwC’s UK energy deals leader Drew Stevenson. “As the UK industry positions itself for a more uncertain future, we expect to see deal activity levels picking up throughout the year ahead.”

Matt Alabaster, the firm’s energy deals strategy leader, said that with the falling price of oil, many firms will have to consolidate their operations and reduce costs. “While $70 oil is not the end of the world, coming after five years of sustained high prices it has caused a maelstrom in the industry, with firms now having to heavily focus on cash and costs like never before. Throughout 2015, we could see some bad headlines about very good companies being hit by factors outside their control – the UK industry is not alone in having to adapt to this environment.” With prices now sitting around $50 a barrel, it’s thought that there could be a lot of private equity firms trying to snap up smaller companies facing cost constraints. Others feel that a mega-deal in the industry – not seen since the merger of Exxon with Mobil and Chevron with Texaco in 2000 – could also be on the cards.

The year ahead
Elvin believes that the next 12 months has the potential to replicate the successes of 2014. However, he points out that the high number of funds looking to raise capital means it might be difficult to find the best investment opportunities for investors. “While investors will be enjoying the liquidity delivered to them by on-going high levels of distributions, the market is saturated with a record number of funds seeking capital, and investors consequently face the challenge of identifying the best investment opportunities. On the other hand, fund managers are confronted with intense competition, not only with fundraising, but also in finding attractive deal entry prices while at the same time having to meet increased demands from both investors and regulatory bodies.”

This year has already started with some headline grabbing deals, with Spanish telecom giant Telefónica looking to sell its leading British mobile network O2 to Hong Kong-based Hutchison Whampoa for around £10.25bn ($15.73bn). This deal would see O2 paired up with budget operator Three Mobile. Meanwhile telecom giant BT attempts to acquire another player in the market – EE – for £12.5bn ($19.18bn).

Elsewhere, there has been talk of a reported merger between internet giants Yahoo! and AOL, a split in the operations of Hewlett Packard, and continued scrutiny of the $45bn merger between Time Warner Cable and Comcast.

Certainly, there is a lot of money that is ready to be deployed by private equity and pension funds, looking at financing the next big mega-merger. With conditions in a number of industries pointing towards consolidation, it seems now is the time to get the chequebook out for these firms.