Expert on in-house corporate tax Nancy Manzano provides World Finance with insight into US country-by-country reporting regulations, with one definitive question in mind, what exactly has changed? 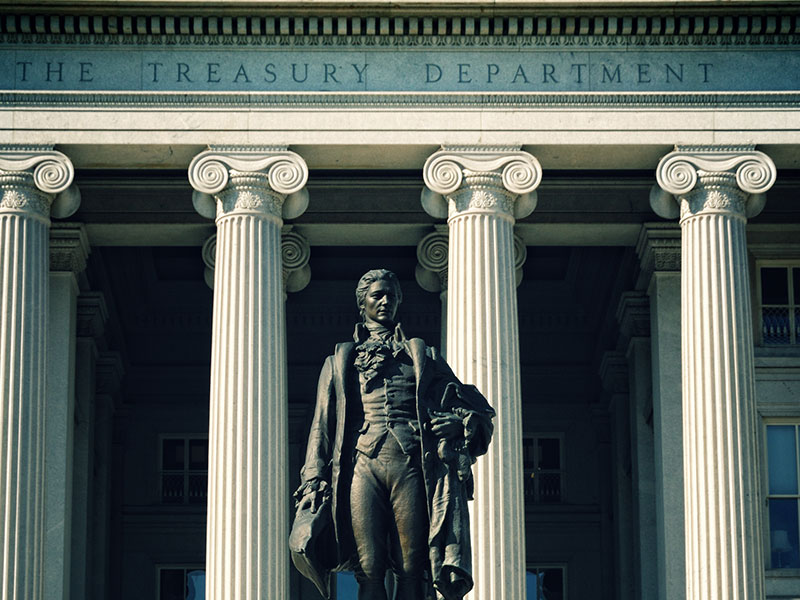 The US Treasury Department adorned by the statue of the first Secretary of the Treasury, Alexander Hamilton
Tax | Wealth Management
Author: Nancy Manzano, Director in the Chief Tax Office at Vertex Inc

In June 2016, the US Treasury Department (hereafter Treasury) and the Internal Revenue Service (IRS) released the much-anticipated final regulations for country-by-country reporting (CbCR). Since the proposed regulations were released in December 2015, the Treasury has received voluminous comments from taxpayers, coalitions, trade and professional associations, tax advisors, non-governmental organisations, social activist groups and religious organisations. Nonetheless, it is apparent that no substantial changes were made as a result of the comments, even as 2016 drew to a close. All told, the final CbCR regulations are generally consistent with the proposed regulations. And so, what follows is a recap of the changes, non-changes and various clarifications included in the final regulations.

Constituent entities
Among the most notable changes and clarifications in the final regulations is, “Constituent Entities/Persons Required to File”. Although no change was made to the proposed definition of “constituent entity”, the final regulations instruct that CbCR information is not required for foreign corporations or partnerships if those entities are not mandated to furnish information under IRC Section 6038(a).

In addition to allowing a US territory’s ultimate parent to designate a US business entity as surrogate filer, the final rules also clarify that stateless entities are reported in aggregate, and each stateless entity’s owner, reports its share of revenue and profit in tax jurisdiction of the owner. According to the preamble, this could result in some degree of double counting. Furthermore, distributions from a partnership to a partner are not included in the partner’s revenue, while foreign insurance companies that elect to be treated as domestic corporations will be treated as entities resident in the US. Likewise, decedents’ estates, individual bankruptcy estates and grantor trusts are not subject to CbCR.

Treasury indicated in the regulations that Form 8975 may provide guidance on determining tax jurisdiction in cases where a business entity is resident in more than one tax jurisdiction. One final clarification in this area is an entity is not considered stateless merely because its tax jurisdiction of residence does not impose an income tax on corporations.

It is also important to note that the effective date for compliance has not changed; multinational entities (MNEs) headquartered in the US will need to comply with US CbCR regulations starting with fiscal years that begin on or after June 30, 2016, as reflected in the proposed CbCR regulations. The final regulations unveiled the IRS form number (Form 8975) for CbCR; the due date of Form 8975 remains unchanged and must be filed at the same time as the ultimate parent entity’s income tax return, which includes extensions.

However, what has changed is that Treasury and the IRS plan to soon issue a procedure that will allow for earlier voluntary filing. Such voluntary filing should allay any “secondary reporting” concerns caused by the effective date discrepancy between the US and countries with a January 1, 2016 effective date.

Finally, in spite of comments suggesting that CbC reports be made public, the final regulations still do not provide for public disclosure of CbC reports. In the preamble, Treasury went a step further and reiterated that US MNEs will indeed benefit from confidentiality requirements, safeguards and appropriate use restrictions provided in the competent authority arrangements between the US and foreign jurisdictions.

Data sources were limited to certified financial statements, books and records maintained with respect to each constituent entity, or records used for [reporting] tax

Under the proposed regulations, data sources were limited to certified financial statements, books and records maintained with respect to each constituent entity, or records used for tax reporting purposes. The final regulations, which more closely align with the Organisation for Economic Cooperation and Development’s (OECD) recommendation, offer a more expansive set of data sources, including both regulatory financial statements and internal management accounts.

In the proposed regulations’ definition of revenues, dividend payments were excluded, provided they were also treated as dividends in the jurisdiction of the constituent entity (or payor). The final regulations clarify that this exclusion also applies to imputed earnings and deemed dividends. Moreover, the final regulations indicate that for tax-exempt entities, revenue only includes unrelated business taxable income.

The proposed regulations called for MNEs to report, or reasonably estimate, the total number of employees on a full-time equivalent (FTE) basis (with the option of including independent contractors) in the relevant tax jurisdiction in which they performed work as of the end of the accounting period. The final regulations adopt an approach consistent with the OECD recommendation that employees be reported in the jurisdiction of tax residence of the employer, not where work is performed. The final regulations’ definition of tangible assets was expanded to expressly exclude intangibles and financial assets.

Three readiness questions
The final CbCR requirements add new levels of complexity to tax data management activities; as such, MNE tax departments should now take the time to evaluate how they will respond to CbCR.

The second pertinent question that MNE tax departments should ask is, do we have control over our data? This involves ensuring that enterprise resource planning (ERP) and related financial and tax-automation systems can organise, consolidate and deliver the data required to populate Form 8975.

Finally, they must ask whether it is necessary to implement new processes and new tax technology. New processes may be required to supplement currently available data, while new technology may also be needed so that MNEs can easily reconcile CbCR data to their audited financial statements, legal entity books, local country tax returns and transfer pricing documentation.

As MNE tax departments engage in evaluating CbCR, they should keep in mind the same prominent details in the final regulations’ preamble: compliance is necessary; a thorough effort is required; and tax data management challenges and risks still loom.