Analysts remain split over the giant’s future, but with commodity prices set to remain low, 2016 is likely to be a difficult year for Glencore 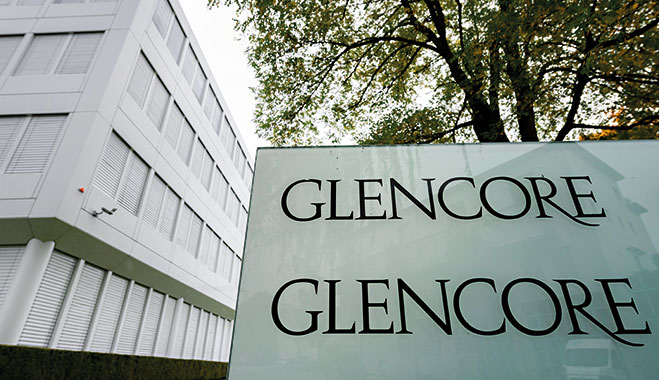 Glencore’s headquarters in Baar, central Switzerland. 2016 is likely to be a difficult year for the firm
Wealth Management
Author: Aaran Fronda

The largest commodities trading company on the planet is in bad shape. Back in September 2015, its share price took a nosedive and fell more than 29 percent – an event that wiped billions off its value – sending a shiver down the spine of investors and raising a lot of concern over the company’s ability to reduce its vast amounts of debt. In an attempt to quell shareholders’ jitters, its CEO Ivan Glasenberg put forward a debt-reduction plan, which had the desired effect. But analysts remain worried: if commodity prices do not pick up some time soon, negative shareholder sentiment is sure to return.

The core problem for Glencore is its debt, which currently stands at over $31bn, though there are fears that it is much higher than that, which has led to many market commentators contemplating the prospect of the company collapsing completely. If that does happen, as many people are predicating it will, it will send shockwaves through the entire financial system, as it holds billions of dollars worth of derivatives – leading some to wonder if Glencore could trigger the next financial meltdown in a similar fashion to how the debt-riddled Lehman Brothers did in 2008.

Unsustainable debt
When the firm’s share price plummeted, Glasenberg was quick to react; issuing a statement explaining to shareholders how Glencore would reduce its debt and take necessary steps to mitigate the risks brought on by the depressed commodities market. “Notwithstanding our strong liquidity, positive operational free cash flow generation, lack of debt covenants, modest near-term maturities and the recent affirmation of our credit ratings, recent stakeholder engagement in response to market speculation around the sustainability of our leverage, highlights the desire to strengthen and protect our balance sheet amid the current market uncertainty”, said the CEO and CFO, Steven Kalmin, in a joint statement.

“We remain very positive on the long-term outlook for our business and this is reinforced by senior management’s commitment to take up 22 percent of the proposed equity issuance. Copper and zinc are both supply-challenged and an essential ingredient of future global growth. In seaborne thermal coal, a capex drought and low prices have helped rebalance the market. We are confident that thermal coal’s position and availability as the lowest cost fuel source for many large economies will underpin its key role in the global energy mix for many years to come”, they added.

Pledging to reduce debt is one thing, but analysts at the global investment bank and securities firm Jefferies warned at the time that whatever action the company did decide to take would need to happen fast, as the company “does not have the luxury of time”. Glencore must have got the memo, because it quickly identified a number of assets that it was ready and willing to sell in a bid to balance its books. During the second week of October, it announced that it would begin the process of selling of two of its wholly owned copper mines: Cobar in Australia and Lomas Bayas in Chile.

The move has helped the commodities giant to recover from its record low share price, which now rests a touch above 90p as it headed into the new year, up from 68.62p in late September. However, it still has a long way to go before it is to return to 300p+ range that it held at the start of 2015.

The debt reduction plan is clearly working. Its success at rallying the share price has certainly reduced shareholders fears, but there are a number of analysts that argue that there is still a lot more to do, as Glencore’s debt is much higher than many may like to admit or even realise. “We estimate the financial system’s exposure to Glencore at over $100bn”, explained Bank of America analysts in a note to investors, “and believe a significant majority is unsecured. The group’s strong reputation meant that the build up of these exposures went largely without comment. However, the recent widening in [Glencore’s] debt spreads indicates the exposure is now coming into investor focus.”

The note to investors continued, “To us, it seems that the world has changed. With increased regulatory scrutiny on bank commodity exposure, we think that ‘business as usual’ won’t be an option. While we don’t see an imminent liquidity crisis we note that bank credit may inevitably tighten, albeit over time.”

Bank of America broke down the company’s debt as follows: $35bn in bonds, $9bn in bank borrowings, $8bn in available drawings and $1bn in secured borrowing, along with an estimated $50bn in “committed lines against which it can draw letters of credit with which to finance its trading inventories”. There is a clear divide among analysts regarding Glencore’s prospects. The financial services firm, Investec, made headlines after it claimed that the company maybe worthless on account of the fact that with debt levels in the hundreds of billions, the enterprise is “solely working to repay debt obligations” and, therefore, unable to concentrate on generating value for shareholders.

Paul Gait, an analyst at Sanford C Bernstein, is far more optimistic about the Swiss-based resource company – extremely so in fact. He thinks that Glencore will eventually rally to around 450p a share, one of the highest predictions of any market researcher. He also has taken umbrage with those analysts that beg to differ and who have been quick to predict the demise of the commodity trader.

Gait is certainly the most confident of all buy side analysts, but he isn’t the only bull out there. Deutsche Bank came out in support of the commodities trading company after initially warning investors to hold tight; upgrading its rating to ‘buy’ in early November, albeit with a much more modest target of 200p.

“The rapid debt reduction plans should remove the balance sheet and trading fears that have overly impacted the share price”, analyst Rob Clifford said in a note to investors. “Through to first quarter 2016 we should see a number of positive catalysts, including additional asset sales.” The review of Glencore that got the most attention, however, was the one by Investec’s Mark Elliot, a leading analyst on the commodities giant. When things turned sour for Glencore, the bank, like many others gave it a ‘sell’ rating, and stuck with that sentiment in November, even when the Swiss-based mining company agreed to sell future silver output from its Antamina copper mine in Peru – a move that brought in more than $900m to the cash-strapped firm. Elliot and his team even cut their target price to 77p, down from 125p in September, solidifying their position that Glencore is not out of the woods yet.

“We haven’t really changed our position on Glencore. What we’re seeing in copper and across the commodity space shows that there are tough times ahead”, (see Fig. 1) Elliot said. “If US rates are going to rise and emerging markets are struggling, so commodity demand is weaker than we would all hope, and debt costs are going to go up, it doesn’t bode well for leveraged miners with thinner margins.”

Shrinking exposure
Analysts and investors are naturally worried about the future of Glencore because nobody really knows when the commodities market will rebound. The market’s prolonged period of depressed prices is an indicator that all is not well in the global economy. Demand from China has fallen considerably as result of its government opting for more sustainable growth rather than constantly striving to support the rest of the world through double-digit levels.

China’s decision to slowdown has hit commodity producers hard. For the last decade, they’ve grown accustomed to high levels of demand, increasing their supply accordingly. They are now adapting to slower growth in China and it will take time for commodity prices to adjust to this new reality. Glencore is certainly hoping that it doesn’t take too long for prices to rise, because the longer they stay low, the harder it is for them to drive down their debt. The bad news is that prices seem destined to remain low in 2016. In fact, according to a recent report by BMI Research, analysts “do not expect significant recoveries in the coming quarters, rather stabilisation”.

The combination of depressed prices, Glencore’s massive debt obligations and global investors high level of exposure to the company has some commentators fearing that the commodities giant could be the next Lehman Brothers, capable of dragging the world into another financial crisis before having the time to fully recover from the last one.

There are certainly comparisons to be made between Lehman and Glencore, but its financial market exposure is nowhere near the former investment bank. The commodities trader has done well to reduce its exposure, with it reducing its holdings in derivatives considerably from roughly $19bn at the tail end of 2014 to $9.8bn in Q2 2015. This trend is likely to continue in 2016 on account of poor commodity price forecasts. This doesn’t mean that another financial crisis is not on the cards, as commodities prolonged period of depression will drive greater market volatility and uncertainty this year – it’s just unlikely to be triggered by Glencore.