Where US manufacturing jobs really went

The number of manufacturing jobs in the US has been on a steady decline since the mid-20th century, but a loss in one sector often creates gains in another 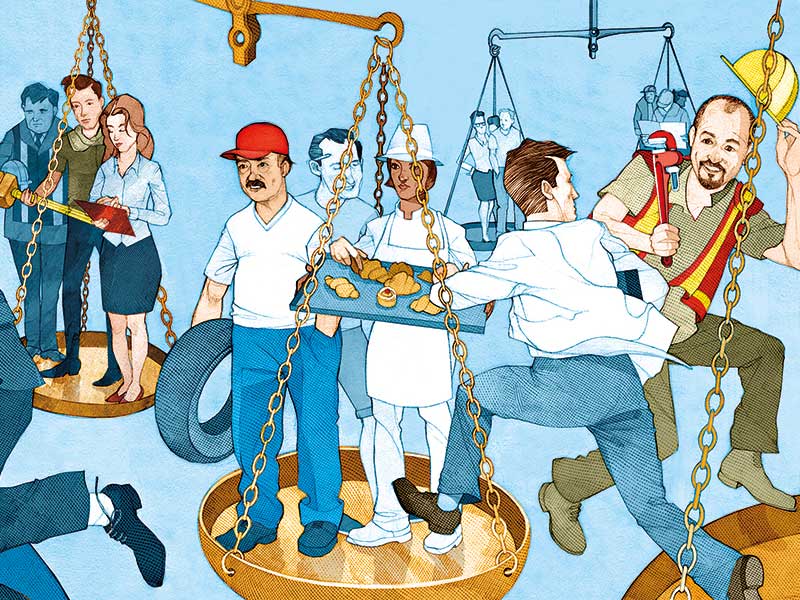 In the two decades from 1979 to 1999, the number of manufacturing jobs in the United States drifted downward, from 19 million to 17 million. But over the next decade, between 1999 and 2009, the number plummeted to 12 million. That more dramatic decline has given rise to the idea that the US economy suddenly stopped working – at least for blue-collar males – at the turn of the century.

But it is wrong to suggest that all was well in manufacturing before 1999. Manufacturing jobs were being destroyed in those earlier decades, too. But the lost jobs in one region and sector were generally being replaced – in absolute terms, if not as a share of the labour force – by new jobs in another region or sector.

Operation relocation
Consider the career of my grandfather, William Walcott Lord, who was born in New England early in the 20th century. In 1933, his Lord Brothers Shoe Company in Brockton, Massachusetts was facing imminent bankruptcy. So he relocated his operations to South Paris, Maine, where wages were lower.

The Brockton workers were devastated by this move, and by the widespread destruction of relatively high-paying blue-collar factory jobs across southern New England. But in the aggregate statistics, their loss was offset by a bonanza for the rural workers of South Paris, who went from slaving away in near-subsistence agriculture to holding a seemingly steady job in a shoe factory.

The South Paris workers’ good fortune lasted for just 14 years. After World War II, the Lord brothers feared that depression could return, so they liquidated their enterprise and split up. One of the three brothers moved to York, Maine; another moved to Boston. My grandfather went to Lakeland, Florida – halfway between Tampa Bay and Orlando – where he speculated in real estate and pursued non-residential construction.

Again, the aggregate statistics didn’t change much. There were fewer workers making boots and shoes, but more workers manufacturing chemicals, constructing buildings and operating the turnkey at the Wellman-Lord Construction Company’s Florida-based phosphate processing plants and other factories.

In terms of domestic employment, the Wellman-Lord Construction Company had the same net factor impact as Lord Brothers in Brockton. The workers were different people in different places, but their level of education and training was the same.

Churning jobs
So, during the supposedly stable post-war period, manufacturing (and construction) jobs actually moved en masse from the northeast and midwest to the Sun Belt. Those job losses were as painful for New Englanders and Midwesterners then as the more recent job losses are for workers today.

Because there is always some degree of churn, a more accurate perspective on what has happened is gained by looking at blue-collar jobs as a share of total employment, rather than at the absolute number of manufacturing workers at any given time. In fact, there was an extremely large and powerful long-run decline in the share of manufacturing jobs between World War II and now. This gives the lie to the meme that manufacturing was stable for a long time, and then suddenly collapsed when China started making gains.

A question of trade
In 1943, 38 percent of America’s nonfarm labour force was in manufacturing, owing to high demand for bombs and tanks at the time. After the war, the normal share of nonfarm workers in manufacturing was around 30 percent.

Had the US been a normal post-war industrial powerhouse like Germany or Japan, technological innovation would have brought that share down from 30 percent to around 12 percent. Instead, it has declined to 8.6 percent. Much of the decline, to 9.2 percent, is attributable to dysfunctional macroeconomic policies, which, since Ronald Reagan’s presidency, have turned the US into a savings-deficit country, rather than a savings-surplus country.

As a rich country, the US should be financing industrialisation and development around the world, so that emerging countries can purchase US manufacturing exports. Instead, the US has assumed various unproductive roles, becoming the world’s money launderer, political risk insurer and money holder of last resort. For developing countries, large dollar assets mean never having to call for a lifeline from the International Monetary Fund.

The rest of the decline in the share of manufacturing jobs, from 9.2 percent to 8.6 percent, stems from changing trade patterns, primarily owing to the rise of China. The North American Free Trade Agreement, contrary to what US President Donald Trump has claimed, contributed almost nothing to manufacturing’s decline. In fact, all of those “bad trade deals” have helped other sectors of the American economy make substantial gains; as those sectors have grown, the share of jobs in manufacturing has fallen by only 0.1 percent.

In this era of fake news, astroturf social movements, and misleading anecdotes, it is imperative for anyone who cares about our collective future to get the numbers right, and to get the right numbers into the public sphere. As the Republican Party’s first president, Abraham Lincoln, put it in his ‘house divided’ speech: “If we could first know where we are, and whither we are tending, we could then better judge what to do
and how to do it.”