Kristalina Georgieva is leading the IMF through one of the biggest challenges in its history. As a long-standing champion for low-income countries, she could be the ideal person to manage the debt crisis currently building in emerging markets 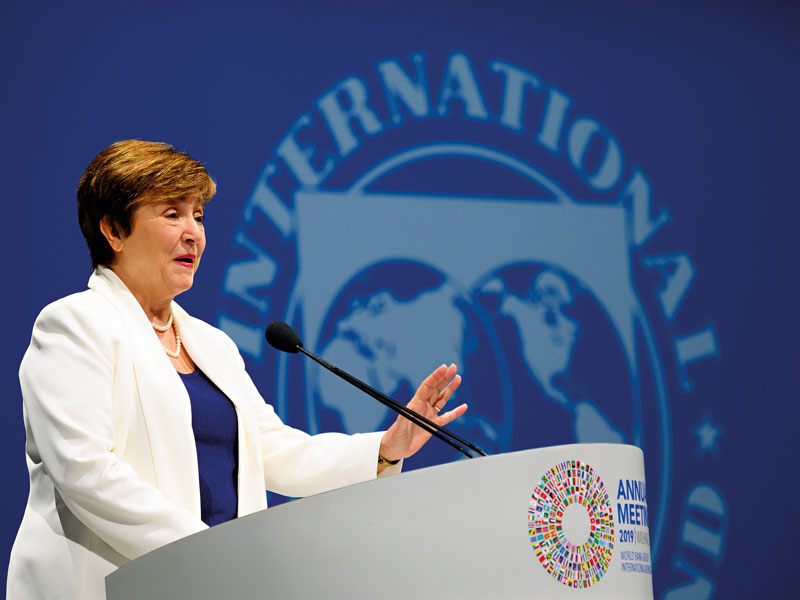 Kristalina Georgieva was only six months into her role as head of the IMF when the coronavirus pandemic struck. With economies around the world grinding to a halt, many countries found themselves in desperate need of financial aid from the lender of last resort. Since the start of the crisis, the IMF has expanded two emergency loan programmes, and more than 100 countries have applied for support.

Georgieva has warned that the world is headed for a recession even worse than that of the Great Depression, and believes the gravity of the situation demands a no-holds-barred economic response. “Do as much as you can,” she told member states on April 27. “Then do a little bit more.” As well as urging member states to spend whatever was needed to fight the virus, she has eased access to the lender’s emergency $1trn fund and promised that lending programmes were being approved at record speed.

Although the challenge ahead is daunting, her supporters believe she is the perfect person for the job. Georgieva has long been a voice for emerging economies, which, in the current crisis, will be hit especially hard by falling oil prices, capital outflows, the collapse in tourism and decline in demand for exports. “I am worried about countries that, even before this crisis, were in a weaker position,” she said in April. “The same way the virus hits more severely those [who] have preconditions [or] weaker immune systems, the [economic] crisis hits weaker countries much more severely.”

Champion of emerging economies
It is no surprise that Georgieva has such an affinity for the world’s poorer nations: born in Sofia, Bulgaria, she is the only IMF leader ever to herald from an emerging economy. Growing up behind the Iron Curtain, Georgieva quickly learned the pain of financial hardship.

Although she came from a prestigious family – her great-grandfather, Ivan Karshovski, played a key role in building the new Bulgarian state following independence from the Ottoman Empire – Georgieva’s youth was far from easy. When her father became seriously ill, she and her family found themselves struggling to make ends meet. The fear of becoming a burden drove her to pursue academic success and taught her the resilience that she’s been applauded for throughout her career. “The tougher life is, the more you smile,” she told the Financial Times in 2017. “Panic? Would it help? No – it drove me to mature much faster.”

Georgieva has always believed that she would be best placed to help Bulgaria by working in an international role, so when Bulgarian Prime Minister Boyko Borisov invited her to become the Commissioner for International Cooperation, Humanitarian Aid and Crisis Response at the European Parliament in 2010, it was an easy decision. “I agreed to become a commissioner because the situation wasn’t good for Bulgaria and there was a possibility of our reputation being hurt,” she said at the time.

During her time in the role, Georgieva managed one of the world’s largest humanitarian aid budgets and established herself as an advocate for the growing number of crisis-affected people around the world. She then served as the European Commission Vice President for Budget and Human Resources, a role that saw her heavily involved in efforts to tackle the euro area debt crisis. Georgieva didn’t lose sight of her care for marginalised communities, though; in 2015, she tripled the funding available to the refugee crisis in Europe. She was also the driving force of improvements to the commission’s gender representation, helping it achieve its target of filling 40 percent of management roles with women by 2019. “If we don’t have targets, it will take 100 years for women to reach men in salary terms, in terms of their ability to contribute to society,” she told CNBC in 2018. “No community, no society can survive unless we tap into the talents of everybody.”

Georgieva was praised for keeping a cool head during heated debates – in particular, her steady handling of the EU’s incredibly divisive budget impressed her peers. She has demonstrated a capacity to stand her ground while managing politically fraught situations, leading her to become the undisputed candidate for the IMF leadership in 2019, having been the only nominee for the role.

Impressive experience
Georgieva’s international career didn’t start at the European Commission. Prior to that, she spent 17 years building a career at the World Bank. Having been recruited as an environmental economist in 1993, she steadily climbed the ranks of the elite international organisation, taking on a number of directorial positions. She returned to the World Bank in January 2017, when she was appointed CEO of the institution. The move from the European Commission back to the World Bank came just months after her unsuccessful bid to become the UN’s secretary-general.

Although Georgieva insisted that her move was not influenced by the internal politics of the commission, those around her claimed she had repeatedly butted heads with Chief of Staff Martin Selmayr. Politico reported at the time that Georgieva saw Selmayr as a “poisonous” influence who failed to consult others on important decisions.

Not long after her appointment as CEO, Georgieva set her sights on the World Bank’s bureaucracy. She cut the frequency of regular meetings by half, significantly reduced the length of project documents and shortened the comment process. “What is happening in the world is that change is more profound and it comes faster,” she told Devex in 2017. “We need institutions to be agile and adaptable to change.” In her role, she was also tasked with helping the bank move away from traditional lending models and focus instead on enticing private investors, while also fostering a more results-driven culture.

During Georgieva’s tenure as CEO of the World Bank, her skills as a negotiator shone through. She successfully secured a $13bn capital increase with the Trump administration that put the World Bank’s financial capacity at a record high.

For a four-month period in 2019, she also served as interim president of the bank, during which time she oversaw the lender’s day-to-day operations. In this position, Georgieva once again proved herself to put the needs of poorer countries first. She defended the World Bank’s use of targeted programmes to reduce poverty against critics who argued that universal benefit programmes were more effective. “We are shifting towards the lower-income countries and also towards the countries that are on the frontline of this fight against extreme poverty,” she told the BBC in 2019. “We target those who need it the most.”

Critical conditions
Low and middle-income countries with poor access to financial markets are also those most at risk during the coronavirus crisis. So far, the loans approved by the IMF include $5bn for Ukraine, $491.5m for Uganda and $396m for Jordan. Georgieva has urged wealthier nations to do their part and contribute to the fund’s concessional lending facilities. In April, Japan – the largest contributor to these facilities – made a $100m contribution to the IMF’s Catastrophe Containment and Relief Trust. Georgieva has since called on other members to do the same. “By working together, we can overcome the global challenge facing us and help restore growth and prosperity,” she said.

Georgieva has also encouraged countries to place their emergency funds in green investments. She has suggested that governments consider taxing carbon to raise revenue for their recovery and incentivise the private sector to cut emissions. “We are about to deploy enormous, gigantic fiscal stimulus and we can do it in a way that we tackle both crises at the same time,” she said. “If our world is to come out of this crisis more resilient, we must do everything in our power to make it a green recovery.”

Despite her efforts, Georgieva has found herself having to defend her strategy to protect the world’s poorest economies in the aftermath of COVID-19. Some think the IMF’s attempts to help these countries don’t go far enough. In May, more than 300 lawmakers from around the world urged the IMF to cancel poor countries’ debt, rather than simply suspending it, to free funds up to fight the virus. These lawmakers also encouraged the IMF to create trillions of dollars of new special drawing rights (SDR), the currency of the IMF. An SDR allocation can be compared to a central bank printing new money. So far, the proposal has been opposed by the US, which voiced concerns that the funds created through an SDR allocation would mainly benefit countries like China, and not the low-income countries they were intended for. This is because new reserves are allocated according to members’ shares in the IMF. Although the institution’s lending capacity has quadrupled since 2008, its power can still be easily limited by the US, its largest shareholder. Georgieva must win US support if she is to support the most vulnerable economies with an SDR allocation.

The coronavirus crisis puts the IMF in a uniquely difficult position. In a crisis, the IMF is an important safety net for all struggling economies – but the current crisis is unlike others. Ordinarily, when the IMF lends to a country, it insists the nation tightens its spending to ensure the loan isn’t wasted and the IMF can be repaid. But now, Georgieva is urging countries to spend whatever is necessary. While such measures are essential to limiting the virus’ impact, lending with no strings attached could erode the quality of the IMF’s loan portfolio. David Lubin, Head of Emerging Markets Economics at Citigroup, wrote in the Financial Times: “The IMF and its shareholders face a huge problem. It either lends more money on easy terms without the ‘collateral’ of conditionality, at the expense of undermining its own balance sheet; or it remains, in systemic terms, on the sidelines of this crisis.”

The sheer scale of the economic fallout of coronavirus will push the IMF’s ability to lend to the limit. While ensuring the lender can come to the aid of struggling nations, Georgieva also needs to keep one eye on the post-pandemic future. If all goes to plan, wealthier nations will come to the rescue of poorer ones, and emergency loans could help fuel a global green recovery. This is certainly a tall order – however, Georgieva’s track record shows she is more than capable of meeting that challenge head-on.

Born: 1953 | Education: The University of National and World Economy

1993
Kristalina Georgieva began her 17-year-long first stint at the World Bank when she was recruited as an environmental economist. She climbed her way up to director of the environment department in 2000.

2008
In 2008, Georgieva was appointed as vice president and corporate secretary of the World Bank. She played a critical role in the bank’s governance reforms in the wake of the 2008 international financial crisis.

2010
Georgieva joined the European Commission, where she managed one of the world’s largest humanitarian aid budgets and led the creation of the EU’s Civil Protection Mechanism, strengthening cooperation between member states.

2014
Incoming European Commission President Jean-Claude Juncker appointed Georgieva as vice president for budget and human resources, making her the most senior technocrat in the commission and placing her in charge of 33,000 staff.

2017
The World Bank announced Georgieva as its first CEO. She played a key role in broad reforms, which involved securing a $13bn paid-in capital increase – the largest funding increase in the bank’s history.

2019
In September 2019, having been the sole nominee for the role, Georgieva was named managing director of the IMF, succeeding Christine Lagarde. She is the first person from an emerging economy to take up the position.