On the money: why Ross McEwan can take National Australia Bank forward

When Ross McEwan took on the top job at RBS in 2013, the bank was on shaky ground. Within six years, he had transformed it into a profitable enterprise. Now, McEwan is expected to repeat that remarkable performance at National Australia Bank 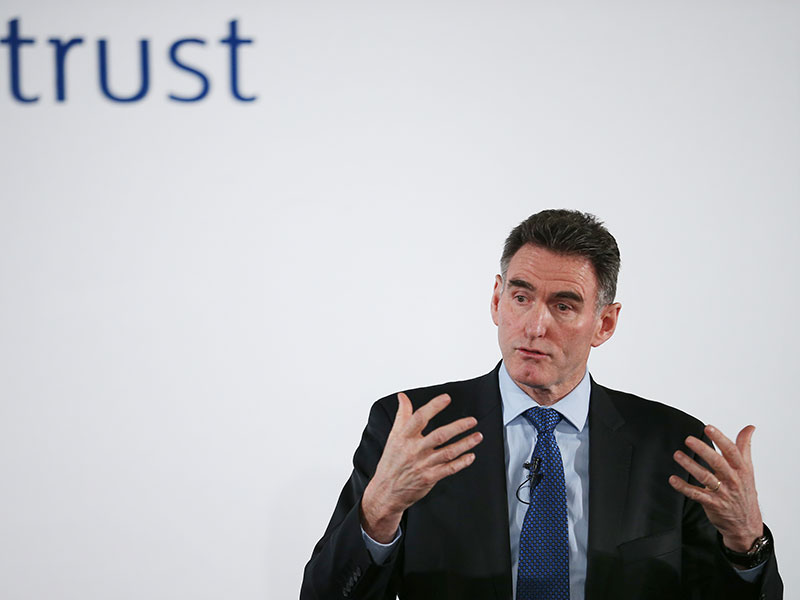 It’s not a role for the faint-hearted, but if anyone is up to the job of bringing National Australia Bank back from the brink, it’s Ross McEwan
Featured | Profile

“Banks need to come back and focus on those core customers, and that will generate a lot more competition in this market”

Ross McEwan is known as something of a firefighter in the financial services sector. Throughout his two-decade-long leadership career, the Kiwi banker has been called upon to extinguish blazes in some of the world’s most embattled institutions.

McEwan’s most famed achievement to date has been his transformation of the Royal Bank of Scotland (RBS), which the bank’s chairman called “one of the biggest UK corporate turnarounds in history”. When McEwan took up the role of CEO in 2013, the lender was floundering in the wake of a £45.5bn ($56bn) bailout that left the UK Government with an 80 percent stake. Just five years later, RBS has become a profitable enterprise once again and has recommenced dividend payments to shareholders – all on McEwan’s watch.

He now faces a similar challenge, this time closer to home: in July, it was announced that McEwan would replace Philip Chronican as CEO of National Australia Bank (NAB). The bank has seen its fair share of regulatory trouble in recent months, having been singled out as a perpetrator of bad banking practices in a report by the Royal Commission. But with his impressive arsenal of crisis-management experience, McEwan is one of few who can put NAB back on solid ground, making him the clear favourite for the top job.

Money over mind
McEwan has always been good with money. “If I put money on a credit card, I pay it off in the month,” he told The Scotsman in an interview in 2017. “I’m a bank’s worst nightmare.” He credits his parents with instilling this fiscal responsibility in him: when he was growing up in New Zealand, his mother would put away every spare penny of her shop assistant salary. His father, meanwhile, was not one to give handouts. “I remember I borrowed some money off my dad and him saying, ‘I want it back’,” McEwan told The Scotsman.

With his impressive arsenal of crisis management experience, Ross McEwan is one of few who can put NAB back on solid ground

Despite his financial prudence, he wasn’t particularly academic, and has described his degree from New Zealand’s Massey University as being “made up of C passes”. He even failed a key accountancy module twice and has since claimed he is “more comfortable with people than figures”. It’s this quality, combined with his penchant for wide-ranging strategic thinking, that facilitated his ascendance to the upper echelons of the Australasian insurance sphere. Less than two decades after graduating, he was appointed CEO of AXA New Zealand, having risen through the ranks at National Mutual, which was acquired by the French insurer in 1995. After six years in this role, he took on the same post at First NZ Capital Securities, the Kiwi affiliate of Credit Suisse.

In 2003, McEwan was headhunted for the top role at the New Zealand retail banking services division for the Commonwealth Bank of Australia (CBA). He jumped at the chance to bolster his institutional banking experience, shifting between retail and wealth management before becoming head of retail banking at CBA in 2007. While in the latter position, he got his first taste of the challenges involved in an entire strategic overhaul, when the 2008 financial crisis severely dampened public confidence in the banking sector and CBA was forced to find ways to restore the trust of its customers.

McEwan did this by improving access to the bank by enhancing mobile services, extending branch opening times and making it easier for customers to access loans. “His leadership of retail banking services has led to all-time highs in customer satisfaction, a strong performance for shareholders and a high level of people engagement,” CBA CEO Ian Narev said of McEwan in 2012.

Feeling the pinch
In 2011, McEwan was tipped for the top position at CBA but narrowly lost out to his friend Narev. This placed him in a difficult spot – he had achieved all he could within CBA’s retail division and wanted a new challenge, but did not want to move to a competitor within the Australian banking market out of loyalty and respect for his current employer. “To me, it was: step away from it, go overseas, try some new things,” McEwan told the Australian Financial Review earlier this year. “RBS was one of the businesses I’d discussed with my wife that actually I thought would be quite a challenge at a retail level to have a go at repairing.”

Many in the UK banking industry would have stared open-mouthed had he made that admission at the time. For the previous five years, RBS had been considered the basket case of the sector. Its troubles began in 2007 when the bank led a consortium acquisition of Dutch lender ABN AMRO for £49bn ($60.3bn). The deal, which was the largest bank takeover in history at the time, wiped out RBS’ capital reserves, leaving the bank dangerously exposed to financial shocks. In April 2008, recognising the fragility of its position, RBS raised £12bn ($14.8bn) through a rights issue, but this did little to plug the hole in its finances. Less than six months later, at the peak of the financial crisis, the bank crumbled and had to be bailed out by the taxpayer to the tune of £45.5bn ($56bn).

Following this, RBS’ troubles were far from over. When the bank was rescued, then-CEO Fred Goodwin stepped down but continued to claim a pension worth £703,000 ($865,000) a year, leading to outcry from investors and the public. His remuneration was subsequently reduced, while in 2012 he was stripped of his knighthood, a dishonour usually reserved for those who have committed a criminal offence.

It was in this context that McEwan joined the lender as the head of retail banking. During his time in the position, RBS’ reputation was further tarnished by two substantial regulatory fines of £50m ($61.5m) and £390m ($479.9m). The first came as a result of a mass IT failure in June 2012, which left customers unable to access their accounts for days, while the second, in February 2013, related to RBS’ role in rigging the LIBOR rate.

Back from the brink
McEwan inherited a mess when he was promoted to CEO in October 2013. His predecessor, Stephen Hester, failed to return the bank to an even keel, reputationally or financially; the government still owned an 80 percent stake and shares sat at £3.60 ($4.43) each, compared with the 2007 high of £21.51 ($26.48). “When he took on the CEO position, the bank was in a very distressed state,” John Cronin, a financial analyst at Goodbody, told World Finance.

McEwan’s recovery plan began with some tried and tested tactics to improve customer accessibility, such as extending branch opening hours and boosting the bank’s digital offering. In a speech in 2014 announcing the bank’s new strategy, he even attributed the bank’s failure to the fact that it had lost sight of who it was supposed to be serving. “It became detached from the customer-focused values that have to be at the heart of any bank,” he told his audience. McEwan also wound down many of RBS’ international and non-core businesses, reducing the lender’s cost base and paving the way for it to become a more agile institution. When he joined in 2013, the bank had operations in 30 countries, but that number had more than halved to just 12 countries by 2018.

This cost cutting paved the way for the bank’s return to profitability, which it achieved in 2018, posting an annual profit of £752m ($924.8m). It also allowed the UK Government to reduce its stake in the lender to 62 percent, meaning the bank could resume making dividend payments to shareholders. Today, RBS is “very profitable, well capitalised, very liquid, has coped very well with stress tests and should be in a position to withstand a very severe macro shock as a result of the changes that [McEwan] made”, Cronin said. “McEwan has done an exceptional job resuscitating the institution.”

The one main area in which he hasn’t succeeded is on the stock market, as RBS’ share price remained extremely low throughout Mc-Ewan’s tenure despite his restructuring efforts. However, according to Cronin: “When you look at the RBS share price today, relative to where it was 10 or 11 years ago, we’re comparing apples and oranges in terms of the wider environment.” Banks have far greater regulatory cost burdens today, their market position is under threat from disruptive fintech firms, and investors are unwilling to purchase bank shares in the way they would have back in 2007. “McEwan has come under criticism on occasion, but I think it’s almost inevitable when you’re firefighting on a daily basis,” Cronin added.

Repeat performance
Having successfully brought RBS back from the brink, McEwan is now looking to perform a similar feat at NAB. Australia’s fourth-largest bank has come under fire following a report by the Royal Commission that saw it accused of engaging in overly aggressive sales practices and charging customers a staggering AUD 100m ($68.3m) in excess fees. In the wake of the scandal, both NAB’s chairman and CEO resigned, leaving the lender to weather the storm rudderless. “There are some things that need repairing,” McEwan told reporters upon his appointment as CEO. “[But] one of the reasons I’m here is I find strength in those sorts of challenges.”

The Kiwi banker certainly has his work cut out for him. The Royal Commission’s report has stoked the flames of public anger, and NAB has borne the brunt of this given its centrality in the wider market scandal. McEwan must also tackle the bank’s corrupt corporate culture and brace himself for a slew of potential fines. On top of that, he will face macroeconomic challenges: Australia’s impressive GDP growth over the past decade has stalled in recent months, making consistent profitability harder to achieve.

It’s not a role for the faint-hearted, but if anyone is up to the job, it’s McEwan. “He’s somebody who has the experience and the gravitas to deal with both the politicians and the regulators,” Cronin said. “He’ll be able to move forward in terms of taking strategic action, changing governance and adjusting the business’ response to the demands of the environment. It’s an ideal fit.”

2003
McEwan transitioned from insurance to traditional financial services, becoming group executive for retail banking services at the Commonwealth Bank of Australia, where he was later tipped for the CEO role.

2012
The Kiwi banker swapped his homeland for rainier shores when he joined struggling British lender Royal Bank of Scotland as the head of retail banking. He described the move as “quite a challenge”.

2013
Within a year at the bank, McEwan was promoted to the top job at RBS following the resignation of former CEO Stephen Hester. He guided the lender through the next stage of its recovery process.

2014
McEwan hit the headlines when he told The Telegraph that the UK’s fixation on free-if-in-credit banking must come to an end. He called for banks to be more transparent about their pricing on transactions.

2019
Having nursed RBS back to health, McEwan revealed his plans to return to the Southern Hemisphere and give National Australia Bank, which has been accused of overly aggressive sales practices, the same treatment.