We must end the age of exploration subsidies

With support for fossil fuel exploration tainting the climate change debate, exploration subsidies are due a rethink 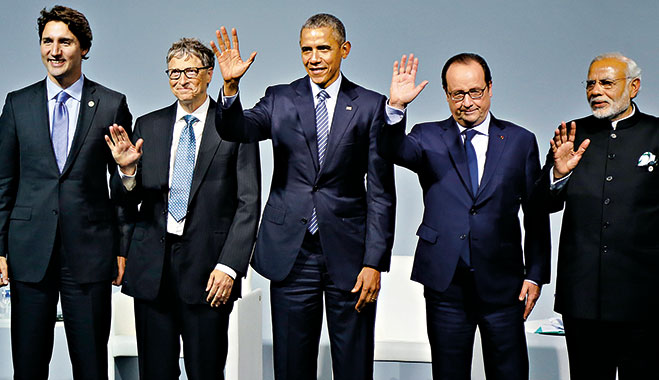 Somewhere around the halfway point of COP21, Oil Change International (OCI) took a moment to shine a light on fossil fuel subsidies, and revealed that support for non-renewables among the world’s wealthiest nations could derail outstanding commitments to climate finance. The findings, which took into account spending in the G7 countries and Australia, showed that the combined annual spend on fossil fuel subsidies totals around $88bn. As a means of comparison, support for the Green Climate Fund is around $2bn.

Looking at the figures for 2013, the US Government handed out $5.2bn in exploration subsidies, Australia $3.5bn, Russia $2.4bn and the UK $1.2bn, mostly in the form of tax breaks for deep offshore fields.

These results feed into a furious debate on the subject of fossil fuel support and whether it compromises the ability of major world governments to act on climate change. Following a (some would say) enlightening two weeks in Paris, where talk of climate finance fiercely divided negotiators, fossil fuel subsidies – particularly on the exploration side of things – have been chastised as a relic of former days.

“The challenge right now is that governments are not updating their fiscal policy to underline much wider objectives, particularly around climate, but also around other issues such as air pollution and energy security, where there is a need to diversify”, Shelagh Whitley, Research Fellow at the Overseas Development Institute (ODI) told World Finance. “For the most part, it has been more a question of governments maybe not taking a lot of these new factors into account when they’re making ongoing decisions, and whether they’re locked into old-fashioned fiscal policy.”

The case for fossil fuel subsidies is less now that the general understanding of the economic, social and environmental costs is greater

The World Bank, the International Monetary Fund (IMF) and the International Energy Agency (IEA) have all called on governments around the world to reform or phase out subsidies, yet a look at the headline figures shows that little progress has been made so far (see Fig. 1). Now that our understanding of the economic, social and environmental costs is greater, there’s no better time than the present to address the disconnect that exists between government actions and ambitions when it comes to climate change.

The same old story
Six years ago, G20 leaders gathered in Pittsburgh and promised to phase out unnecessary government-given support for fossil fuels – yet the situation is little changed. In fact, recent findings show that support for fossil fuels today is greater than it was when the initial pledge was made. This failed promise, together with recent studies that show the world is fast exhausting its carbon budget, has riled critics, for whom action on climate change has come too slowly.

“The big problem with producer subsidies is that we can’t afford to use all of the fossil fuel still buried in the ground – not without triggering runaway climate change”, said Chris Beaton of the International Institute for Sustainable Development (IISD), speaking to World Finance last year. “Claims that helping the fossil fuel industry is good for the economy and jobs are often inflated, or simply not substantiated with published analysis.”

For the very same reasons highlighted in the OCI report, fossil fuel subsidies are under fire. And while not all support should be tarred with the same brush, the case for exploration subsidies is growing thinner by the day. Dough Koplow, founder of Earth Track, told World Finance: “These subsidies create competitive impediments to cleaner energy resources, unlock enormous amounts of carbon from locations that would not otherwise have been economic to develop, and – as with the Arctic – can put at risk fragile ecosystems and other industries that depend on a clean environment.”

One report jointly penned last year by the ODI and OCI noted: “G20 governments’ exploration subsidies marry bad economics with potentially disastrous consequences for climate change.” Chief among the report’s findings was that governments were spending $88bn a year to support exploration; more than double the sum of private investment in exploration. By supporting exploration in this manner, continued the report, G20 countries are creating a ‘triple-lose’ scenario, and diverting funds into damaging investments.

Carbon budgeting
“The world already has a large stockpile of ‘unburnable carbon’. If countries intend to meet their commitments to the 2°C climate target, at least two-thirds of existing proven reserves of oil, gas and coal need to be left in the ground”, the report continued. “Yet governments continue to invest scarce financial resources in the expansion of fossil fuel reserves, even though cuts in such subsidies are critical for ambitious action on climate change and low-carbon development.”

The world economy cannot afford to burn any more fossil fuels than it has on its books, yet the $2.6bn in US exploration subsidies counted in 2009 almost doubled to $5.1bn by the time 2013 hit. This was partly as a result of US policymakers looking to cash in on runaway growth in the local oil and gas sector. Likewise, the UK government has deemed oil and gas majors worthy of additional support, and all in a period where subsidies for clean energy have been cut.

The central question here is whether policymakers – not to mention fossil fuels majors – will acknowledge the existence of a carbon budget and, if so, whether they’ll take steps to reduce their spending. As it stands, needless government-given support for exploration is actively incentivising an overspend, and for as long as these subsidies exist, it’s only natural that producers will expand their horizons. Historically speaking, subsidies have been linked to energy security, domestic energy production and access to energy, all of which can bring material economic and social benefits to the host economy. “These justifications are often problematic and untested”, according to Koplow.

Rod Campbell, Research Director at The Australia Institute, told World Finance: “While I can understand exploration subsidies of mining in general – or the initial phase of any risky industry – the external costs that fossil fuels involve mean they should not be subsidised in any way.” As such, the case for fossil fuel subsidies is less now that the general understanding of the economic, social and environmental costs is greater.

If governments are serious about preventing a global temperature rise of more than 2°C, they must consider the way in which their actions conflict with the Paris climate deal, not to mention more general commitments to the climate question.

In light of these costs, organisations around the globe are calling for subsidy reform in a bid to rebalance energy markets. To give one example, governments in the ODI study spent approximately four times more on fossil fuel exploration than they did renewable energy development.

In the Middle East, where a third of all electricity stems from oil, generous subsidies obscure the potential of low carbon alternatives and so actively incentivises fossil fuel development. Aside from slowing the transition to a low carbon economy, the level of support is at odds with the cost competitiveness and gathering adoption of renewables.

Serious reforms, according to critics, would level the playing field and alleviate some of the pressures weighing on state coffers. And while governments have been slow to act on this point, there is a growing recognition among major world powers that subsidies are in need of a radical rethink: according to the IEA and IMF, almost 30 countries introduced reforms in 2013 and 2014, with many more in the pipeline.

“People need to look at their energy resources as a system”, said Koplow. “They should not subsidise one field over another; should not subsidise any high-cost fields that have large detrimental environmental impacts if developed; and should force oil and gas reserves to compete without subsidies against alternative fuels and demand-side options to boost energy efficiency.”

Not only would reduced support for fossil fuels clear the way for a low carbon transition and significantly reduce environmental pollution, evidence in some circles suggests that phasing out subsidies could yield significant economic benefits. One review, as featured by The New Climate Economy, suggests that the phasing out of fossil fuel subsidies would result in a global real income rise of 0.7 percent per year through to 2050.

When asked about what’s preventing the reforms from happening, Whitley said that there are “several barriers that often interlock with each other, so unfortunately to get rid of one is not usually enough”. Lack of information, vested interests and policy inertia are the biggest three, she said. “It’s often the case that, even if you know all the information about these subsidies and even if you can kind of think of ways of shifting interests… it’s very difficult. It often takes a long time, even if everything is there at your disposal as a government to change policies.”

Putting aside the financial ramifications of such a sharp turn in policy, we should expect to see reforms in the near future as governments begin to make good on promises of reduced emissions. According to Whitley: “Change can happen quite quickly, but it often takes a long time to happen in the first place.” While reforms on this scale are seldom motivated by environmental stimulus, exploration subsidies are one area in which we could soon see an exception.