The shipbreaking industry is a lucrative business, but unless the international community hastens to adopt more effective safety regulations, it will have a negative impact on the shipping sector at large 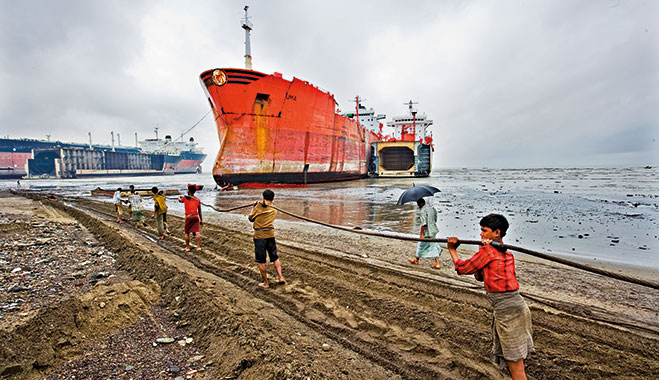 Every year, thousands of shipping vessels succumb to rust, corrosion and metal fatigue; no longer deemed fit for purpose. When their time eventually comes, these goliaths of the sea are broken down in an attempt to recoup as much money from their demise as possible – a process known as shipbreaking. Ship breakers strip out absolutely everything: nothing is wasted. Any parts that can be sold for re-use aboard another vessel are salvaged first, with the remaining morsels extracted and sold for scrap.

Shipbreaking is an extremely profitable business. Scrapping companies pay roughly $400 per tonne, and so, considering the sheer size of the ships that come ashore to be dismantled, the process can easily add up to scrappers collectively paying a total of anywhere between $3m and $10m for a single vessel.

Shipbreaking takes place all over the world, but the manner in which it is carried out differs considerably: in developed countries, the process is handled the by the book, with scrapping companies forced to adhere to strict environmental guidelines outlined by the United Nations Environmental Programme’s (UNEP) 2003 Basel Convention, which stresses the importance of controlling the trans-boundary movements of hazardous wastes and their disposal.

As a consequence of the comprehensive enforcement of these rules, ship breakers in developed countries must ensure that practically every part of the decommissioned vessel is recycled, with only the small amount of unrecyclable materials left over as waste. The guidelines also ensure that before workers begin the process of dismantling a ship, all potentially dangerous materials, including any toxic or flammable gases and liquids, are removed. This procedure is carried out not only to protect the surrounding environment from leakages or contamination during the scrapping process, but also as a safety precaution for those tasked with carrying out the heavy lifting.

Unfortunately, the vast majority of shipbreaking does not occur on the beaches and dry docks of developed nations: more than two thirds of the industry is based in developing countries, specifically India, Pakistan, Bangladesh and China (see Fig. 1). These countries have historically struggled to meet the international standards of practice, with employees forced to deal with working conditions that threaten their health and safety each and every day. What’s more, many of the workers that are tasked with carrying out this difficult and precarious process receive very little in the way of training, and are poorly paid for their labour.

“Without a voice in the workplace, daily abuses go unchallenged”, Nazim Uddin, the leader of the Bangladeshi shipbreaking union, explained in a report conducted by the global workers union IndustriALL. “Shipbreaking workers have miserable conditions. Workers are paid daily – no work, no pay. They receive no paid leave at all, no bonus, no gratuity, and have no job guarantee. Employers pay no compensation to the killed workers’ families. The High Court rules that each killed worker’s family should be compensated BDT 500,000 ($6,400), but employers do not respect this.”

In response to such allegations, major industry bodies, governments and numerous non-profit entities have campaigned tirelessly in the hope of getting South Asian scrap yards to adhere to international guidelines in an attempt to reduce shipbreaking’s environmental impact, and to improve the lives of workers involved in the industry.

All hands on deck
One of the loudest voices in the battle to improve the conditions in the ship recycling sector belongs to the International Chamber of Shipping (ICS). This organisation has helped to raise awareness about the sub-standard practices that take place within the shipbreaking industry, along with the environmental impact that these have and the dangers that they pose to workers.

“The industry accepts its responsibility to promote the safe and environmentally sustainable disposal of ships in the world’s ship recycling yards, the majority of which are located in developing countries”, Peter Hinchliffe, ICS Secretary General, said in a statement. “Adherence to these transitional measures should be seen as a sign of good faith prior to the entry into force of the IMO regime. But they will also help companies avoid falling foul of the separate EU ship recycling regime, which started to take effect on 31 December, and which is also relevant to ships flying non-EU flags.”

More recently, the ICS has reached out to its members around the world, encouraging them to follow a new set of transnational measures. This will in turn help those members to comply with the International Maritime Organisation (IMO) Hong Kong Convention once the global regime comes into force. The ICS has expressed its hope that the measures it has outlined will help ship owners ensure that when their vessels reach the end of their life on the high sea, they will be recycled in the appropriate manner and scrapped by ship breakers using the correct procedures.

“The transitional measures demonstrate that the shipping industry is playing its full part”, Hinchliffe added in his statement. “It is disappointing that after six years the Hong Kong Convention has still only been ratified by a handful of IMO Member States. Governments need to make this a far more urgent priority if they are serious about improving conditions in ship recycling yards on a global basis.”

As such, despite increased regulatory pressure and the support of international trade associations like the ICS, conditions in many South Asian scrap yards are still abysmal, and have shown little sign of improving.

Graveyard shift
The men whose job it is to dismantle these end-of-life ships once they have run ashore on the beaches of South Asia are more often than not poor, unskilled migrants. The vessels in question are usually full the brim with toxic materials, and the workers must contend with a range of highly flammable gases and liquids. To make matters worse, these unqualified workers are rarely supplied with adequate levels of safety equipment or the essential tools that could make the shipbreaking process altogether far safer and simultaneously reduce the toll it takes on their physical health. According to the website Shipbreaking in Bangladesh, which is owned and operated by the non-profit social development organisation Young Power in Social Action (YPSA), in order to make up for the lack of equipment that they receive, workers in shipbreaking yards often resort to crude, improvised methods in order to try and protect themselves: “When a new ship arrives, there are containers, chambers and tanks which contain oil, petroleum and poisonous gases”, according to the website.

“One method used for checking the level of danger in these parts of the ship is to lower down chickens [on] a string to check whether there are dangerous gases. If the chickens survive, the first workers will enter to clean for oil, petroleum and other flammable substances. The flammable substances are often burned off before the cutters enter to rip the ship apart. Gas explosions [are] a common phenomenon.”

If the threat of explosions and poisonous gases wasn’t bad enough, workers are also at risk of being crushed to death by cranes and other heavy lifting equipment, which are placed on slick, muddy sand that is unable to adequately support them. The terrible conditions that these labourers work in combined with the lack of adequate safety equipment and the complete disregard for international regulations has led to thousands of ship breakers losing their lives.

The Gadani shipbreaking yard in Pakistan is one of the world’s largest ship recycling facilities. According to an IndustriALL article, its 15,000-strong workforce regularly works 12 hours a day, seven days a week, under horrendous conditions, while their pay is around PKR 12,000 a month – a figure that the union equates to around $113. The organisation also claims that workers at Gadani have no access to clean drinking water or first aid. The net impact of all this is that at this specific ship recycling yard, more than 19 people lose their lives every year.

Changing the tide
In order to bring an end to the needless loss of life and reduce the environmental impact of the industry, campaigners are urging countries around the world to implement guidelines outlined in the Hong Kong Convention, which was adopted by the IMO in 2009. However, so far only Norway, the Republic of Congo and France have fully ratified the convention, while Italy, St Kitts and Nevis, Turkey and the Netherlands have expressed their willingness to adopt the guidelines outlined in the agreement.

“Ship building for 130,000 workers in South Asia is predominantly done in medieval conditions”, said Jyrki Raina, General Secretary of IndustriALL, in the same article. “It is shameful that five years have passed since the Hong Kong Convention’s adoption and only three countries have ratified… The Hong Kong Convention will change lives.”

For the convention to enter into force, 15 states, representing 40 percent of the world’s merchant shipping (by gross tonnage), must be on board. As such, this initial undertaking is evidently not good enough. More widespread support is clearly required if these life-changing policies are ever to be put into effect.