How Shinzō Abe plans to save Japan’s economy

Abe has proven himself a successful politician, but the Japanese Prime Minister’s real test will come with repairing the country’s shrinking workforce and stagnating economy 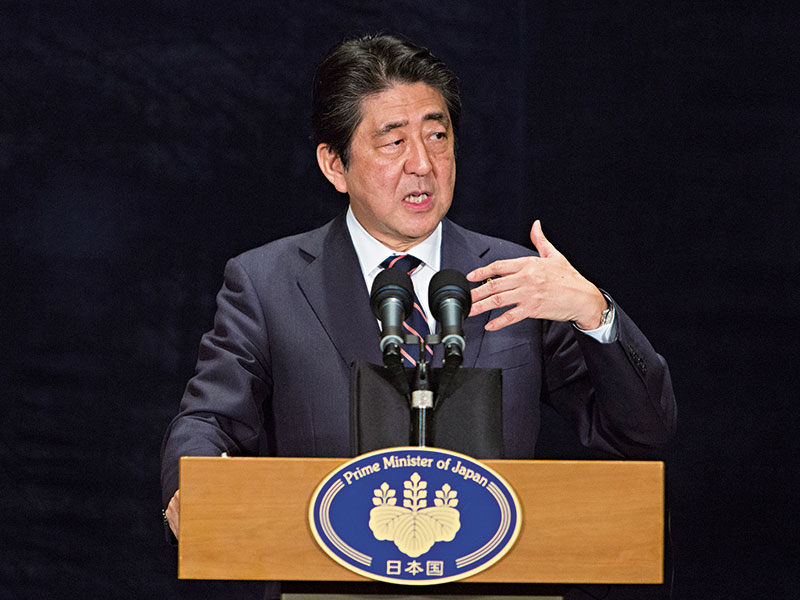 In July, Shinzō Abe showed himself to be one of post-war Japan’s most successful and powerful politicians, as the Prime Minister of Japan once again claimed victory in the country’s upper house parliamentary elections.

The Liberal Democratic Party (LDP) and its junior coalition partners received 70 of 121 available seats in the 242-seat chamber, giving Abe’s party, alongside its coalition partners and other independent politicians, a two-thirds parliamentary majority.

While much international focus has been on how this will give Abe the lawful majority to amend aspects of Japan’s constitution, many observers have noted how the election was fought primarily on economic grounds.

Abe has a deep commitment to Japanese conservatism, yet his commitment to reforming his economy has led him to compromise on such principles

Abe has gained support from far-reaching segments of Japanese society for a number of reasons: his successful bid to change Japan’s constitution, with the intention of weakening its pacifist elements, has led to sharp divisions among Japanese citizens, yet his tenure as leader of the country is closely tied to his promises of economic reform. His plans and actions for reviving the sluggish Japanese economy have come to be known as Abenomics.

Path to power
Abe’s path to power has been a long one. Born in Nagato Province in 1954, Abe was Japan’s first prime minister to be born after the conclusion of the Second World War. He also came from political stock – both his father and paternal grandfather were influential politicians, while his mother was the daughter of Nobusuke Kishi, Japan’s prime minister between 1957 and 1960. His family’s rich political history is often said to have been a major influence on him.

In 1977, Abe graduated from Seikei University in Tokyo, having studied political science. He then travelled to the US to study at the University of Southern California’s School for Public Policy. Following the conclusion of his studies, he began to work for Kobe Steel. However, he soon followed in his family’s footsteps and began to pursue a career in politics.

He left Kobe Steel in 1982, entering his political career through holding a number of posts, including executive assistant to the Minister of Foreign Affairs and private secretary to both the chairperson of the LDP General Council and the LDP Secretary-General.

After 11 years, Abe was elected to the House of Representatives for the first district of Yamaguchi Prefecture, marking the start of his career as an elected politician. From the late 1990s to the early 2000s, he held a number of cabinet positions for the LDP, as well as serving as Japan’s chief negotiator with North Korea, where he represented the families of Japanese citizens abducted by the North Korean regime.

The prestige he gained in these roles soon earned him enough support to be elected president of the LDP, which in turn led to him being elected Prime Minister of Japan in 2006, aged 52. However, his initial reign as prime minister was to be short-lived: he resigned from the position in 2007 when his party began to suffer from unusually poor election results. However, in 2012 he returned to power, and has led the LDP to numerous electoral victories since.

Japan’s birth rate per woman, an issue Abe has put at the centre of his Abenomics policy

With his family being key figures in the history of the LDP – the dominant conservative political party in Japan – Abe is often referred to as a deeply conservative man “whose life and family history is wrapped up in the LDP and its traditions and constraints”, according to David Ignatius of The Washington Post, speaking at a Council on Foreign Relations event in 2015.

However, Ignatius also noted that the economic problems facing Japan have made Abe an accidental progressive. This unintentional liberalism was borne of his acceptance of reality and his recognition of the fact that deep reforms are necessary if Japan hopes to deal with its past few decades of economic malaise and stagnation.

Structural struggles
Since Abe’s second term as prime minister began in 2012, he has made the economy his core agenda.

However, Abe himself faces the biggest challenge when it comes to structural reforms: one of the key reasons cited for Japan’s sluggish economy is its ageing workforce, and so a crucial focus of this policy has been repairing the Japanese labour market. The country’s fertility rates have plummeted, and at present the birth rate sits at 1.4 births per woman, meaning it is well below the replacement rate. At the same time, advances in medical science have meant Japanese people are living longer than ever before; Japan has the oldest population of any major economy in the world.

Depressed birth rates have meant there are fewer young people who are able to join the workforce, while an ageing population means there are more people leaving the workforce and then living for longer periods of time. This has created a top-heavy demographic bulge in the country: fewer people entering the workforce has stunted the Japanese economy’s ability to grow, while a large pool of retirees – drawing their living from previously acquired wealth – has meant less saving funds for investment.

A large retired population is, of course, something that cannot be addressed. While it may have economic drawbacks, it is also testament to Japan’s ability to provide a decent quality of life, allowing record numbers to live longer lives. However, the issue of fewer people entering the workforce can and – to a limited extent – is being addressed by Abe.

Compared to the rest of the industrialised world, Japan has a much lower labour force participation rate for women. By contrast, it has one of the world’s highest labour force participation rates for men. Boosting the number of women entering the workforce, then, would help alleviate current demographic pressures. Abe has recognised this, and pursued policies in this direction: a policy he has termed ‘womenomics’. Speaking at the 2015 World Assembly for Women in Tokyo, Abe said: “Abenomics is womenomics.”

Since 2012, he has pursued a raft of reforms aimed at creating conditions that will encourage more women to enter the workforce. These reforms seem to be working to a limited extent: according to figures from the OECD, Japan’s female labour force participation rate has grown from 65 percent in 2013 to 66.7 percent in 2015.

Japan still has a long way to go in terms of seeing more women enter the workforce, but Abe’s policies are in general pushing progress in the right direction. He has worked towards expanding access to childcare, and has pledged that by 2017 Japan’s currently long waiting lists for childcare facilities will be eliminated, allowing some 400,000 children to be accommodated. At the same time, experimental policies are being pursued to lift bans on immigrant housekeepers in Osaka and Kanagawa, with an eye to expanding the policy nationally.

The fact that lifting bans on foreign housekeepers should initially require district-specific experiments nods towards another key issue afflicting Japan’s ability to deal with its ageing population: immigration. Japan is, for an advanced economy, a uniquely homogenous society. Conservative social attitudes have meant that, while much of the industrialised world has seen major waves of migration since the mid-to-late-20th century, Japan has largely declined to open its doors to foreign workers. While 11 percent of the UK’s workforce does not have British citizenship, and 17 percent of workers in the US are foreign-born, less than two percent of Japan’s labour force is made up of foreign workers.

Abe, being socially conservative himself, is far from an advocate of increased migration to Japan. However, by also being an accidental progressive, he has recognised the necessity of boosting immigration in order to address his country’s demographic issues.

The LDP announced this plan in its policy platform for the latest elections. It noted concern over the fact that “grave effects are emerging because Japanese people alone are insufficient for the workforce”. To this end, the party explained that a “large increase in foreign workers
is anticipated”.

The Japanese Government has now started to relax its notoriously strict foreign worker rules. Principally this will involve a pledge to introduce a permanent residency card – planned to be the fastest in the world – to skilled migrants. Furthermore, migrants with the desire and skill to work in nursing homes should see restrictions relaxed, while migration will also be increased for the construction of the 2020 Olympics project.

Conservative reformer
Policies aimed at increasing the working rate for women and increasing immigration, although by no means the complete solution, are the sort of policies Japan needs. Such policies may make many citizens uneasy, going against the traditionalist values held by some sections of Japanese society – not least portions of Abe’s political party’s constituency. However, Abe, with his conservative credentials, has been able to push forward with such reforms out of necessity.

His family’s long history with conservative politics generally and Japan’s LDP specifically – and his own heartfelt commitment to conservative principles – gives him the credibility to sell these polices to the public on the basis of absolute necessity. Abe has a deep commitment to Japanese conservatism, yet his commitment to the country and to reforming his economy has led him to compromise on such principles in the name of pragmatism. If Japan is able to continue pushing ahead with such reforms, he may well prove himself to be the saviour of Japan’s sluggish economy.

1954
Abe was born in Nagato Province to a politically prominent family. Many of his relatives, including his father, were influential politicians, while his mother was the daughter of former prime minister Nobusuke Kishi.

1978
Having graduated from Seikei University with a degree in political science the year before, Abe travelled to the US to study public policy at the University of Southern California School for Public Policy.

1982
Abe’s political career began when he left his job at Kobe Steel to take on a number of posts within the Japanese Government, including executive
assistant to the Minister of Foreign Affairs.

2002
While serving as deputy chief cabinet secretary, Abe travelled to North Korea as Japan’s chief negotiator. Here he negotiated the release of five Japanese citizens who had been kidnapped by the North Korean regime.

2006
Abe was voted in as the leader of Japan’s Liberal Democratic Party. This move led to him being elected the Prime Minister of Japan at age 52. He resigned from the position a year later, citing health reasons.

2012
Abe returned to power as the country’s prime minister. Since his second term began, he has focused on boosting Japan’s dwindling economy through fiscal stimuli and reforms and tackling its shrinking workforce.