Are we witnessing the death of pennies?

One-cent coins tend to cost more to produce than they are worth, and the process of production is hugely damaging to the environment. Despite these drawbacks, many countries – including the US and UK – stubbornly retain them 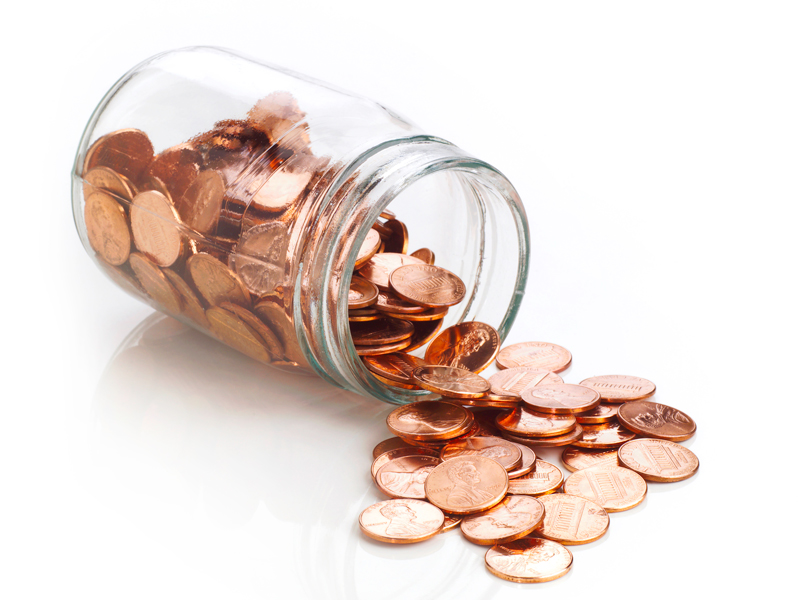 Pennies are not just costly to produce in an economic sense, the environmental damage caused by manufacturing them is also considerable
Strategy
Author: Elizabeth Matsangou

We can be a funny lot sometimes. On the one hand, we are always so eager to step into the future. We embrace new technology – whatever it may be – like it’s exactly what’s been missing from our lives. We’re glued to our smartphones as though they’re limbs attached to our person, and we went crazy for digital currencies as soon as they entered the mainstream media – suddenly, everyone from the local butcher to the high-profile banker started investing. But ask us to eradicate from our lives something that has become outdated – redundant, even – and we cry out in indignation. This, in a nutshell, is the situation we have with the penny.

It costs more than a penny to make a penny. This has been the case for the US since 2006

In spring of this year, the debate heated up in the UK. After the government toyed with the idea of eradicating one and two-pence coins for good, the immediate reaction was one of outrage at the thought of eliminating a symbol of national pride. In the US, a spat of sorts has been going on for years now. Some countries, meanwhile, have made the move already: in May 2012, Canada bucked the trend and retired its lowest-denomination currency. Unsurprisingly, its economy has survived this unfathomable shock, while the country itself is also still standing.

More cost than worth
Canada is not alone. Australia and New Zealand withdrew their one-cent coins even further back – 1992 and 2006 respectively – and are among a growing list of others. As radical as the elimination of the penny may seem to some, the move is a logical one. By no coincidence, it starts with money: nowadays, it costs more than a penny to make a penny. This has been the case for the US since 2006, in fact.

“The actual amount has fluctuated from year to year, but [the cost is] in the range of 1.6 to 1.7 cents per penny made,” said Jeff Gore, Associate Professor at MIT and co-founder of the group Citizens to Retire the US Penny. The manufacturing cost reached a peak of 2.41 cents in 2012, while in 2017 it cost 1.82 cents per penny, according to the US Mint’s latest annual report. It is also important to note that because so many pennies fall out of circulation, more are required than any other coin: 8.4 billion were delivered in the US last year, greater than the sum of all other coins combined.

Theoretically, a penny can be used thousands and thousands of times over many years, thereby offsetting its disproportionate cost. The reality, however, is that this happens very rarely nowadays. First, nothing costs a single penny anymore: back in 1914, a penny could buy a loaf of bread, a pint of milk or a newspaper in the UK. It’s been decades, however, since you could even buy ‘penny sweets’.

Second, many people just don’t like loose change – particularly pennies, which they rarely use. Coins weigh down our purses and pockets, and take time to count out to a cashier. Many of us collect them in oft-forgotten-about jars, while some people willingly give them away and others simply discard them. A penny generally stays in circulation for much less time than that which would make the cost worthwhile. “To me, this is really striking, where you have a coin that nobody wants to get – we often give it away,” Gore told World Finance. “There’s the ‘take a penny, leave a penny jar’ in many of these shops – yet the US Government is losing money making this thing. It sort of highlights the absurdity of the situation.”

The time wasted is a huge factor for Gore. Indeed, a study conducted by the National Association of Convenience Stores (NACS) providing empirical evidence to the fact was the inspiration behind his campaign. “[NACS] found that something like 1.5 seconds were wasted in each cash transaction as a result of handling pennies… 1.5 seconds is not that long, but if you run the numbers, given the number of transactions over the course of the year and the number of people that might be involved in the transaction – it comes out to be an hour or two that each of us waste as a result of pennies circulating in the system,” Gore explained. “From my perspective, there are a lot of problems in the world that are very difficult to solve, whereas this to me is a complete no-brainer that essentially everyone would be better off if we were to retire the US penny.”

Aside from the costs in terms of both time and money, there is another incurred: that to the environment. Unsurprisingly, it takes a great deal of energy to mine zinc, extract it from ore, roast it, smelt it and refine it. Once processed, it is rolled out, impressions are stamped, and then the newly minted pennies are transported around the country. According to Design Life-Cycle, it takes 35 metric tons of force to strike a penny, while transporting pennies releases more than 1.5 million tons of carbon dioxide into the atmosphere each year.

There is also their toxicity to consider. The US Environmental Protection Agency states that only three to 11 percent of zinc ore contains metallic zinc. The rest is composed of noxious materials, such as lead and cadmium. Even zinc itself is harmful in high doses. These materials can all contaminate the soil and water around the mines from which they are extracted. “Different people are going to have different takes on this. From my perspective, the primary issue is that we should not be wasting resources, and that includes valuable metals, as well as our time,” Gore added.

Bring us luck
Naturally, there are several arguments those in favour of keeping the penny often use. A couple of them are actually quite convincing, with the most common relating to charitable giving. It is commonly said that without pennies, people would simply give less; charities wouldn’t survive without penny drives or a common willingness to rid ourselves of such low-value change. Of course, if everyone – or at least a great deal of us – were to part with their pennies, the amounts raised for charities would be transformative. And when it comes to a good cause, it’s hard to argue for something that could result in less funding.

Aside from the costs in terms of both time and money, there is another incurred: that to the environment

But this may not necessarily be the case. If it is human nature to give away our least valuable currency, this then infers that without the penny, the five-cent coin (or the two-cent, depending on the country) would be donated instead. This in turn could result in charities receiving more.

On this topic, Gore said: “If you look at the value of pennies that end up being collected, it’s really not very large. Besides, we can have nickel drives, and so forth. And so I really think that charities can get money from the other coins that are in the system, and that’s actually where the vast majority of the value is.” Some argue that people will be less inclined to give nickels away, but this is perhaps an overstatement – besides, with time, everything becomes relative.

The other chief argument is that the consumer will lose out, as they will have to pay more for everyday goods. This fear is linked in particular to concerns for the poorer segments of society, which are more inclined to pay with cash, and so could be hit the hardest when prices are being rounded.

It’s natural to assume that corporations will simply increase their prices, particularly given the cost that the transition would have (which would include relabelling, changing menus, reprogramming cash registers, and so on). Back in 1990, when representing the pro-penny lobby group Americans for Common Cents, Raymond Lombra, Professor of Economics at Pennsylvania State University, told a congressional committee: “This rounding ‘tax’ will have a significant adverse effect on consumers. A conservative estimate places the tax in the $600m per year range.”

Opponents such as Gore, however, argue that corporations would not always round up. He uses sales tax as the foundation of his argument. “With sales tax, the final amount doesn’t come out to be right on the penny; instead we round to the nearest penny in order to decide how much [something] is. We don’t systematically round up or down; half the time it goes up, half the time it goes down, meaning that it favours neither the store nor the customer. And indeed, this is the way that we would do it without the penny.”

Everybody wins
Naturally, it is difficult, if not impossible, to calculate just how much both businesses and individuals could stand to lose from the transition – but assuming that a non-systematic rounding takes place, then the difference should be minimal. There is, obviously, a reason why some would argue otherwise. “Given that Jarden Zinc [Products], for example, sells tens of millions of dollars [worth] of penny blanks to the US Mint each year, they have the incentive to fund groups that will make counter arguments, and that’s understandable – it’s just the way that the world works. But it’s important to understand that the pro-penny lobby – and it is indeed a lobby group, [although] it looks like a non-profit website supported by local citizens and so forth – is getting paid to do this, whereas I will note that I don’t get any money for my advocacy of this particular issue,” Gore told World Finance.

And yet, despite the battle fought by those who stand to lose out from the eradication of pennies, this outcome is surely inevitable, for the coins are becoming more and more redundant with each passing year. Add to this the exponential increase in electronic payments, together with the advent of cryptocurrencies, and the notion of continuing to make such low-value and little-used coins becomes all the more absurd.

There are also various emotions involved in the debate – for some reason, people couple pennies with nostalgia. Perhaps this is because they remind us of our childhoods and happy days gone by, where we would splash out on sweet things for mere cents. There are also nationalistic sentiments involved: in the US, the one-cent coin represents President Lincoln; in the UK, the penny is seen as some form of national identity. And yet both arguments are flawed: Lincoln is still represented on the $5 bill, while there are much stronger symbols of British pride – the flag and the Queen being but two.

Perhaps instead it all comes down to a sheer reluctance to acknowledge inflation. Undoubtedly, retiring the penny is a symbol of inflation – one that most people prefer to ignore, because essentially it makes them sad to recognise that the cost of living grows relentlessly. Those of this mindset talk about ‘not giving in to inflation’, but inflation isn’t a bad thing per se – not moderate inflation, at least. It is simply an unavoidable economic mechanism brought on by time.

The truth is no one knows how much removing the penny from circulation could cost both consumers and businesses. But let’s not forget that we have done this before: back in 1857, the US retired its half-cent coin and people simply got used to it. As examples such as Canada, Australia and New Zealand indicate, this time around will be no different. No major problems will be caused, and no issues to the economy will arise. In this scenario, no one loses out – well, except the companies selling penny blanks, of course.