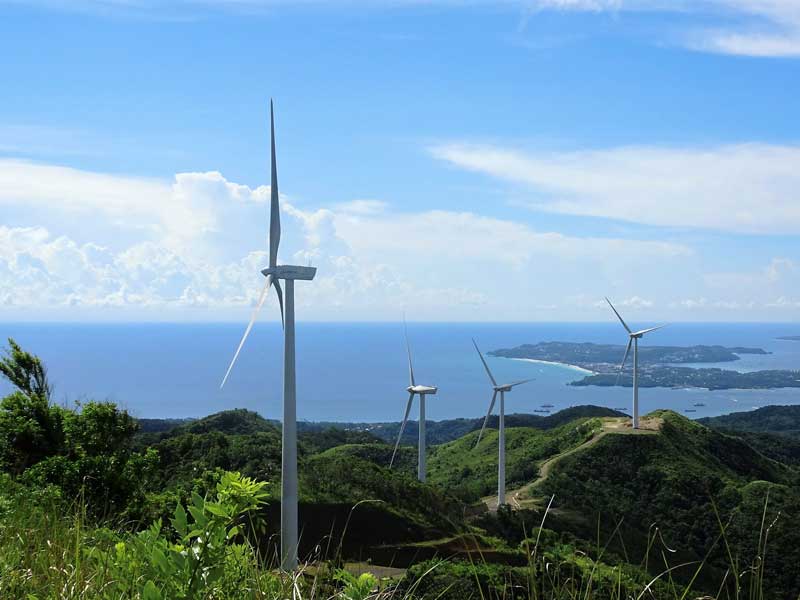 BCPG is operating several green power plants in Thailand, as well as in other Asian countries. The company also produces wind energy in the Philippines, and geothermal energy in Indonesia
Corporate Governance | Strategy
Interview with: Bundit Sapianchai, President and CEO, BCPG Public Company

In Thailand, blockchain technology is being harnessed in a brand new way: to revolutionise the energy market by shifting power production to a decentralised network of small-scale households.

Blockchain technology has received a huge amount of hype over the past few years, but it is only recently that it has started to be implemented in energy markets

BCPG Public Company is a renewable energy company based in Thailand. World Finance spoke to BCPG’s President and CEO, Bundit Sapianchai, about the company’s efforts to build a system that will enable households to buy and sell solar power to one another using microgrids.

New energy economy
Microgrids are a series of small-scale regional power grids that enable households with solar panels to become ‘pro-sumers’. This means they are able to both produce their own energy and consume it through the same peer-to-peer trading platform. This system, which is based around blockchain technology, helps to cut out the middleman and generate trust between consumers and producers in the network.

Sapianchai explained to World Finance: “We want to build a new energy economy. To do so, we started with something quite simple: rooftop solar energy. In Thailand, we have been bringing solar panels to individuals in both the residential and industrial sectors by ensuring the panels are low cost, while also providing low-carbon energy. Once a community is producing energy with solar panels, BCPG can apply its energy trading platform so that every person can trade their energy directly.”

The platform has been dubbed the ‘internet of energy’, owing to its ability to connect individuals in a trusted manner, thereby expanding the peer-to-peer concept to energy markets. “We provide the trading platform using blockchain technology to create a marketplace where individuals can trade their surplus energy.” Through this mechanism, energy is shared more efficiently, so that those households with a surplus at any one time can be connected to those who need it. The initiative will be the first time that microgrid peer-to-peer technology has been established in Thailand.

While BCPG is an international company operating in several countries across Asia, Thailand – where the company has its headquarters – also plays host to its first peer-to-peer solar project. The first community to get started with the technology is located in Bangkok, and is currently scheduled to start trading in the next three to five months. “Our peer-to-peer platform enables people to take control of their energy. People are able to choose what they would like to do with their energy – either they use it, or choose to sell it,” said Sapianchai. In broader terms, BCPG is shifting the energy market from a centralised model, through which consumers purchase their energy from a select few large-scale producers, to a decentralised model, where small-scale producers are empowered to harness the economic value of their own renewable energy production. In a sense, this democratises the energy market by giving more control to local people. “We give power back to the people, so that people have the power to have their own energy economy,” said Sapianchai.

Harnessing blockchain
Blockchain technology has received a huge amount of hype over the past few years, but it is only recently that it has started to be implemented in energy markets. Sapianchai explained: “Blockchain is an incorruptible digital ledger, which can be programmed not just for financial transactions, but for everything with value.” The peer-to-peer energy trading market is a perfect fit for the technology because it necessitates a high level of security, transparency and efficiency to function well. “What we have been offering to our customers is a peer-to-peer transaction, where you can cut out the middleman or intermediary, which ultimately brings them a lower cost for the transaction,” Sapianchai explained.

More specifically, blockchain provides an attractive basis to the trading system because its incorruptible nature ensures that no one can hack the platform. Furthermore, it acts to boost transparency because each buyer and seller knows the individual source of their energy. “This is what blockchain technology is all about – there are a lot of middlemen when we pay our electricity bills today. For instance, we are charged transaction fees from a bank or at the retailer’s shop. But with blockchain, you cut that all out,” Sapianchai continued.

Peer-to-peer potential
While BCPG has so far only kick-started operations on a small scale, the peer-to-peer trading technology has the potential to be taken much further. According to Sapianchai: “It is possible to use it at any scale – you can even scale it up to a national scale.” In Thailand, for the time being, pro-sumers can only buy and sell their energy to others connected to them through the same microgrid. In order for the platform to be scaled up to the country level, it must be possible to sell surplus energy to the government through the national grid. Looking ahead, this will necessitate collaboration between BCPG and the government: “In Thailand, our market has not been privatised like Europe and the US, so one of the first challenges is that we need to talk to the government,” Sapianchai explained.

This said, Sapianchai has already been invited to talk to government officials about the potential for upscaling the technology, and it seems they are seriously looking into it. “It would be a small change for the government, but it would lead the way for some big changes in the energy market,” Sapianchai said. He has little doubt that he will be able to work with the government, as it is a win-win scenario for both individuals and the wider economy. While small-scale producers will be able to generate extra revenue, the larger system will gain a new source of environmentally friendly energy. Sapianchai observed: “From a bigger picture perspective, the government will no longer have to build huge power plants. Instead, they just need to connect individual roofs, which will become the power generation for the country. For me, it’s a simple decision that it is good for the country, and it will work to reduce our energy costs in Thailand.”

From an international perspective, the peer-to-peer solar trading concept is quickly gaining ground as a potential way to reduce the harmful pollution generated through traditional methods of energy production. As such, environmental pressures are helping to accelerate efforts to trial and expand the technology. While green energy is not a new trend, the task of combining renewable and traditional energy for consumption has often faced challenges in practice. “Global warming is real and happening, and the whole world is looking for a low-carbon solution. At the World Economic Forum in Davos this year, a lot of people were talking about this – they would like to see everybody being a part of a movement to not only produce greener energy, but also consume it,” Sapianchai said.

Wholesale to retail
Founded in 2015, BCPG started its operations with a wholesale business model, meaning it focused on producing energy and then selling it onto the grid. At present, the company is operating several green power plants throughout Thailand, as well as in other Asian countries. In the Thai market, the company owns 200MW of solar energy production capacity, while it has part-ownership of a capacity of 200MW of renewable production in Japan.

The company produces wind energy in the Philippines, and in Indonesia it produces geothermal energy. “Our business started in wholesale – I would call that chapter one. Now we are moving towards chapter two – the retail market,” explained Sapianchai. “As a publicly listed company, we aim to keep growing. Our biggest priority is switching from wholesale to retail, but it will take time to develop the retail market. Our other priority is to expand our wholesale portfolio.” From the wholesale angle, the company is actively looking for mergers and acquisitions opportunities throughout South-East Asia.

Looking ahead to the next chapter, a move into the retail space will be aided by the added value of the peer-to-peer trading platform, which is opening up an attractive new avenue for retail customers. While the project is initially being trialled on a smaller scale in Thailand, Sapianchai has high hopes that the peer-to-peer concept will be rolled out further afield. After all, once the software is in place, it can be upscaled without limit.