The rising demand for electric cars is fuelling the need for certain hard commodities. Finland is one country that is demonstrating its ability to adapt to meet the increasing desire for these materials through a sustainable approach to mining 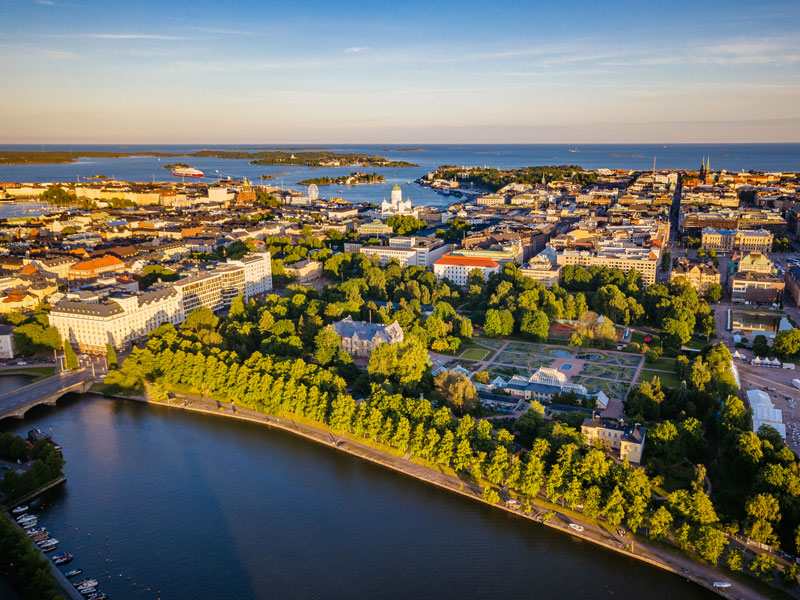 Helsinki, Finland. The country is at the forefront of the European mining industry as it has more than 40 mines and quarries, and is the only EU country producing phosphate and cobalt
Featured | Strategy
Interview with: Harry Sandström, Programme Director, Geological Survey of Finland

Since Tesla produced its first car in 2008, the transportation industry’s attention has shifted towards vehicle electrification. Volkswagen, Mercedes-Benz and General Motors, to name a few, are in the midst of a race to get their own electric cars onto people’s driveways as soon as possible. This is having a dramatic effect on demand for certain commodities as carmakers scramble to secure the raw materials needed to manufacture large batteries. According to McKinsey & Company’s 2018 report Lithium and cobalt – a tale of two commodities, global demand for lithium is expected to triple between 2017 and 2025 thanks to vehicle electrification. Over the same period, demand for cobalt is also expected to increase by 60 percent.

To meet this new reality, the mining industry is undergoing a lot of changes. One country playing a particularly important role is Finland. Speaking with World Finance, Harry Sandström, Programme Director at Geological Survey of Finland, said the country is currently the only European Union nation producing cobalt, and is already a critical player in European battery cluster development. Geological Survey of Finland is one of the leading geological research and development organisations in the world, and discovered most of the mines currently under operation in Finland. “It’s estimated that half of all the cobalt chemicals used in global battery production are produced in Finland,” Sandström added.

This has placed Finland at the forefront of the industry, but the country is now confronting the challenges presented by increased battery production. Vehicle electrification is guaranteed to increase, but the specific rate of growth is still up for debate. This has made establishing a sustainable rate of growth in the mining sector difficult. Sandström explained that there are also challenges arising in terms of mineral processing: “There is a growing worry regarding how the metals used in batteries are produced, and whether they are based on ethical and sustainable production practices in countries that respect environmental and social values.” However, with Finland’s impressive history of mining innovation, the country is perfectly equipped to overcome these challenges.

Rubble to riches
Mining in Finland dates back to the 13th century, but became a significant national industry after the discovery of the Outokumpu copper mine in the early 1900s. Following the Second World War, the Finnish metal industry grew rapidly thanks to a high global demand for metal products. After joining the EU in the mid-1990s, Finland saw a change in government policy that allowed the provision of mining licences to foreign companies, prompting the ownership of Finland’s mining industry to diversify. Today, Finland has more than 40 mines and quarries, and is the only EU country producing phosphate and cobalt. It is also the largest gold producer in Europe, and has an extensive downstream minerals industry.

Expected increase in global demand for lithium between 2017 and 2025

Expected increase in global demand for cobalt between 2017 and 2025

The Finnish mining industry has always put a lot of resources towards research and development. “Our ores are normally of a low grade and the metallogeny is difficult, making processing fairly challenging. Cooperation between mining companies and technology providers has been instrumental in paving the road for the world-class and innovative industry we are now home to. Today’s industry, which includes mines, research organisations and mining equipment technology and service providers, has good internal cohesion and strong international connections,” Sandström told World Finance.

The Finnish Government’s policy and regulation base is also reasonably stable and predictable, and has so far been supportive of the growing demand for sustainable mining. Between 2011 and 2016, Finland implemented a remarkable development programme known as Green Mining. The project had a budget of over €120m ($136m) and saw more than 150 participants take part. Currently, the government is financing the Mining Finland Programme, which aims to boost the export of Finnish mining technology and encourage growth in the sector’s small and medium enterprises.

These efforts have been adding up: for the last few years, the Fraser Institute’s annual mining industry survey has listed Finland among the top five mining jurisdictions in the world, and last year the country was ranked first in terms of attractive mining investment targets. According to Sandström, the country is also on the cusp of some major developments: “Finland has good potential for graphite and vanadium mining. Finland is also a significant nickel producer, and within a two-year period a new chemical plant for processing cobalt and nickel sulphates will be constructed by Terrafame Oy.” Keliber, a Finnish exploration and mining company, also has intentions to open the first European lithium mine with a lithium chemical plant between 2019 and 2020.

With Finland’s impressive commodity reserves, developments like these are only expected to continue. “Overall, Finland is still rich with undiscovered battery metals,” Sandström said. “Accordingly, Geological Survey of Finland has launched a dedicated mineral potential project for identifying battery metals.”

Geological Survey of Finland’s geological data collection is considered to be one of the best in the world: its reach covers the whole country, and data collected includes geological, geophysical and geochemical information, which is made readily available to exploration and mining companies. “Current mineral potential mapping is the key factor in terms of attracting mining investment to Finland,” Sandström explained. “Geological Survey of Finland has close links to the mining industry, and is consulting with mining companies to help them understand the country’s geological and ore formations.”

Unearthing sustainability
With more attention being paid to socially and environmentally conscious mining, both miners and technology providers are working to mitigate the impact their operations are having on the world. “The days when it was believed that one could produce primary raw materials in countries that might not respect sustainability are long gone,” Sandström said. “Ethical investment is quickly coming to the mining industry.”

One area of concern is the environmental footprint that mining leaves, and the potential conflicts of interest that arise between mining and other sectors, such as tourism and agriculture. Finland has tackled these challenges with the establishment of the Network of Sustainable Mining. The organisation consists of representatives from various relevant stakeholders and interest groups, with the goal of discussing and solving potential conflicts of interest before they escalate. “Handling land usage rights with the indigenous people located in the small, northernmost part of the country is an issue that has also been taken very seriously, and with full respect of the views of these parties,” Sandström told World Finance.

There are also operational challenges that mining is addressing. Productivity in mining has been declining for decades, and is far behind many other production industries. Sandström explained that this is due to the relatively high commodity prices, and the old, siloed operational culture that still persists in many operations. This has made the industry a prime target for disruption. “Sensor technology is becoming cheaper and cheaper, and mines can produce a lot more measured information from their ore body and processes,” Sandström said. “This digital information can be used to improve productivity in terms of material and energy efficiency.”

Harnessing technology
Another current global trend is that ore grades are decreasing in quality, demanding better processing technology and more selective mining, according to Sandström. “Finland’s approach is to improve productivity through technology, and we also already have knowledge of processing low-grade ores.” Finland is also home to some of the most cutting-edge mining and processing technologies, such as flash smelting, autogenic and semi-autogenic grinding, hydrometallurgical processes and automatic pressure filters. Even today, approximately 80 percent of all underground mining technology is developed in either Finland or Sweden.

Sandström explained that the major research and development focus areas in mining are currently unmanned operations, digitalisation and the electrification of machinery. “Water is also an issue all over the mining world: you either don’t have enough of it, or you have too much because of rainfall. Proper water-table management across the entire mining area is essential to understand the vulnerability of local water systems.” Finland has devoted a lot of resources to technology for both water and environmental management on regional and site levels. Mine closures are another issue Finland has focused on. “Mines do not last forever; even the big ones will eventually be closed,” Sandström said. “Finland has developed its own mine closure protocol, with steps that are undertaken even before the mine is opened.”

This is only the beginning of Finland’s efforts to become a significant actor in global battery production. “Finland’s aim is to concentrate on its strengths in the entire battery production chain: raw material supply, its processing, chemical production, control technologies of battery systems, development of electrified machinery and finally recycling technologies,” Sandström told World Finance.

This journey is still just beginning, but according to Sandström, Finland’s next challenge will be how to ensure mined and recycled material loops can be effectively connected: “Recycling is currently one of the key focuses of research and development. However, considering the expected increase in demand for battery metals, recycling also cannot satisfy demand. We also need primary raw materials.”

Another challenge is that Finland is currently not home to much car manufacturing, although it does have a pedigree in mobile technology development. “Finland is also looking for closer cooperation with other Nordic countries,” Sandström said. “In the future, Northern Europe will be very strong in the sectors of both raw materials and technology.” With its long history of success, there are few countries as well equipped to meet the challenges that vehicle electrification present.