After years of prolonged pessimism on the subject of foreign aid, it’s time we celebrated the successes of international development, writes Emily Cashen 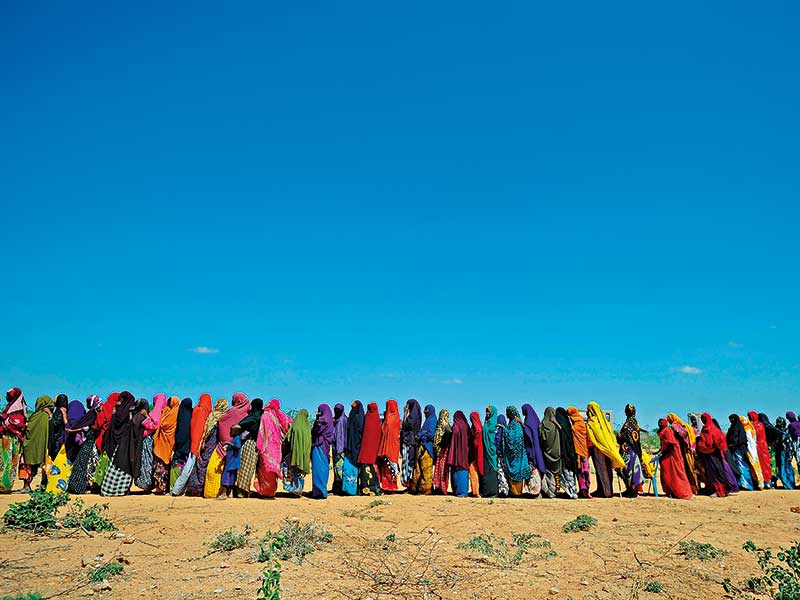 “We stand at a critical point in history”, the UN humanitarian chief Stephen O’Brien told the Security Council at a meeting in March. “We are facing the largest humanitarian crisis since the creation of the United Nations.” More than 20 million people are at risk of starvation or death from disease in Yemen, Somalia and Kenya, while areas of South Sudan are already officially suffering famine. In Yemen alone, child malnutrition has jumped 200 percent in two years, and three million citizens have been displaced from their homes.

At the March meeting, O’Brien said more than $4.4bn in aid was needed by the end of July if there was to be any hope of averting this catastrophe. As of the end of May, these countries in crisis had received just 10 percent of the necessary funds.

Without urgent action from the international community, millions will simply starve. And yet, as the world teeters on the brink of the worst humanitarian crisis in living memory, developed nations are turning their backs on this suffering. From Brexit to Trump, there has been a swing towards protectionism in parts of Europe and the US, stoking fears among aid workers that established foreign aid commitments might now be under threat.

These fears are certainly well founded, as in March the Trump administration outlined plans to cut its foreign aid spending by up to one third, delivering a devastating blow to the world’s poorest nations. With the situation rapidly worsening in East Africa and Trump threatening to further slash funding, the foreign aid debate has once again been thrust into the spotlight.

While NGOs call for immediate, comprehensive action, aid sceptics question whether such measures are effective in achieving long-term stability and growth. But, as 20 million lives now hang in the balance, the foreign aid question has never been so urgent.

Does foreign aid work?
Defying opposition from media critics and members of her own Conservative Party, British Prime Minister Theresa May gave aid workers something to celebrate in April when she confirmed the UK’s foreign aid budget will remain intact at 0.7 percent of GNI. While this announcement was warmly welcomed by the development sector, it quickly prompted criticism from aid sceptics, who believe the nation’s £14bn ($18bn) overseas development budget is largely going to waste.

However, Saira O’Mallie, UK Director of the ONE Campaign, an advocacy organisation focused on fighting extreme poverty, told World Finance: “£14bn sounds like a huge amount of money if you don’t know the context of it and you don’t know what that figure is as a portion of the budget – it’s seven pence in every 10 taxable pounds.”

A culture of pessimism has surrounded foreign aid spending for some time now, with critics declaring that development assistance is not only ineffective, but that a large portion of this money is lost to fraud and corruption each year. Bestselling works such as William Easterly’s The White Man’s Burden and Dambisa Moyo’s Dead Aid have delivered blistering criticisms of existing aid strategies, suggesting that foreign aid ultimately does more harm than good by encouraging economic dependency. While these accusations are certainly provocative, there may also be an element of truth in the authors’ diatribes.

Over the past 50 years, developed nations have sent more than $1trn in aid to Africa in an effort to end extreme poverty and stimulate economic growth. Today, however, the continent still dominates the ranking of the world’s poorest countries, with African nations making up 27 of the World Bank’s 31 low-income economies. Life expectancy in sub-Saharan Africa remains below the global average, while over 414 million are still living in extreme poverty.

The challenges remain great, but that’s not to say foreign aid has been ineffective in the global fight against poverty. In fact, over the past half century, aid finance has played a crucial role in improving quality of life in the world’s poorest countries. “The UK’s Department for International Development (DFID) has seen 5.3 million girls get an education through its Girls’ Education Challenge”, said O’Mallie. “Elsewhere, the progress foreign aid has made in the fight against HIV, AIDs and malaria is also significant, and the UK has supported this through investment in programmes such as Gavi, the Vaccine Alliance.”

Global vaccine funding now immunises a child every two minutes, helping to prevent millions of early deaths from treatable conditions such as pneumonia, diarrhoea and tuberculosis. Thanks to the medical support provided by foreign aid, the number of children dying before their fifth birthday has been halved since 1900. When it comes to education, significant progress has also been made, with 90 percent of the world’s children now attending primary schools, compared with less than fifty percent in 1950. What’s more, literacy rates in sub-Saharan Africa have more than doubled in the past 40 years.

“Global poverty has been almost halved since the 1950s”, said Peter Smith, Head of UK Media at the ONE Campaign. “The fight against extreme poverty has been incredibly successful, but that war is not over yet.”

Making the money count
From providing education to food security, evidence shows foreign aid has indeed helped to improve lives in developing nations across the globe. And yet, one of the most pressing concerns for aid advocates today is that assistance is simply not reaching those people most in need.

Every year, huge amounts of aid funding are lost through government tax evasion, money laundering and bribery, although it is difficult to calculate just how much money goes missing this way. With corruption rife in many aid recipient countries throughout Africa and the Middle East, fraud not only consistently undermines aid efforts, but also impacts taxpayer support of development spending. As such, media scrutiny of aid wastage is now on the rise, prompting a profound reassessment of current aid delivery strategies.

“In places where there is corruption and there is money lost, then DFID will take action – that’s already happened in Rwanda and Liberia”, O’Mallie explained: “In these cases, DFID either stopped channelling money through the government and instead went straight to civil society organisations, or it just withheld funding altogether until progress was made.”

Aside from the issue of corruption, we also have to consider whether aid is being spent in the most effective way. In 2016, aid experts observed a slight rise in global foreign aid spending, with six developed nations reaching the UN’s spending target of 0.7 percent of GNI (see Fig 1). However, despite this increase in aid funding, developed nations tend to be spending more on refugees already within their own borders, rather than sending the money overseas to help fight extreme poverty.

“The question of what you spend your aid budget on is very important”, said Amy Dodd, Director of the UK Aid Network. “Germany just joined the 0.7 group this year, but the vast majority of its budget is spent in Germany on refugees, and that’s not the most effective aid. Supporting refugees is a great thing to do, but it’s not development aid in action.”

Indeed, refugees arriving in Europe certainly require support, but the needs of displaced citizens in the developed world are undeniably greater. More than three million people have already been displaced by Yemen’s bloody civil war, and local refugee camps are bracing themselves for a worsening famine. Meanwhile, as Kenya teeters on the brink of an unprecedented starvation crisis, the population of Dadaab – the world’s largest refugee camp – has swollen to 250,000, with resources running worryingly low.

What’s more, if governments need to reconsider what they are spending their aid budgets on, they must also reassess the channels through which they provide aid. In the UK, the majority of the aid budget is spent through DFID, but aid workers are concerned an increasing portion of funds is being spent through other government departments, such as the Ministry of Defence. Not only do these departments lack the same level of transparency as DFID, but they also have a largely different focus. “The core purpose of DFID is to end extreme poverty”, explained O’Mallie. “The same can’t be said for the Ministry of Defence.”

Philanthropic impact
In an age of immense philanthropic giving, some aid sceptics are beginning to question whether official development assistance is still necessary. Founded in 2000, the Bill and Melinda Gates Foundation has had a profound impact on the aid landscape, funnelling billions of dollars into health initiatives, sanitation projects and emergency relief. With investments pouring in from high profile philanthropists such as Warren Buffett, the foundation now boasts a budget of more than $40bn – far outstripping the total US foreign aid budget of $31bn.

As the world’s largest and most charitable foundation, it is hard to overstate the impact the Bill and Melinda Gates Foundation has had on global development. However, its founders recently warned governments cannot rely on philanthropic donations to meet the needs of the world’s poorest people.

Shortly after taking office in January, newly inaugurated President Trump announced he would be reinstating the so-called ‘global gag rule’, a piece of legislation designed to block US funds to any overseas organisation that offers abortion counselling or referrals. While NGOs and governments from around the world have quickly stepped in to fill this urgent funding gap, Bill Gates advised any further aid cuts would “create a void that even a foundation like ours can’t fill”.

of this amount had been received as of May

The foreign aid budget of the Bill and Melinda Gates Foundation

The foreign aid budget of the US Government

“The US is the number one donor in the work that we do”, Gates told The Guardian. “Government aid can’t be replaced by philanthropy. When government leaves an area like that, it can’t be offset, there isn’t a real alternative.”

Ignoring these warnings of a potentially catastrophic funding gap, Trump appears intent on continuing to slash the nation’s aid budget. In his budget proposal for 2018, the president has suggested a 28 percent cut in overseas development spending which, if implemented, would squeeze the US aid budget to a level not seen in more than two decades.

Reflecting Trump’s oft-scrutinised isolationist vision for the nation, the proposed cuts would see a reduction in US funding for the UN, as well as an extreme reduction in spending on climate change and cultural exchange programmes. “It marks a step back from internationalism, cooperation and multilateralism, which is really concerning”, said Dodd. “Stepping back from working with the UN is a particularly worrying idea.”

“Every country is better off if there is greater global equality, even if you just look at it in terms of potential trade partnerships”, said O’Mallie. “Helping countries to invest in their own infrastructure just makes everyone safer and makes the world a more stable place.”

Over the past 12 months, the world has seen a turn towards isolationism and protectionism, and the impact of such a trend will be felt most bitterly by the world’s poorest nations. In the 40 years since the UN established its 0.7 percent aid funding target, just six countries have met this pledge. With the US turning its back on its foreign aid commitments, it is high time the world’s richest economies fulfil the promise they made almost half a century ago.

As politicians debate the effectiveness and ethics of foreign aid, the world stands on the brink of the greatest humanitarian crisis since 1945. A child now dies every 10 minutes in Yemen from a preventable disease, while more than one million South Sudanese children are suffering from severe acute malnutrition. With 20 million lives now at stake, the developed world can no longer ignore this suffering. Foreign aid may well have its flaws, but the consequences of our inaction will forever haunt us.