The battle to be top of the stocks

The Stock Exchange of Hong Kong has been forced to consider its own global relevance since losing out to New York in its bid for the Alibaba IPO in 2014. Many believe that a loosening of regulations can inspire a revival 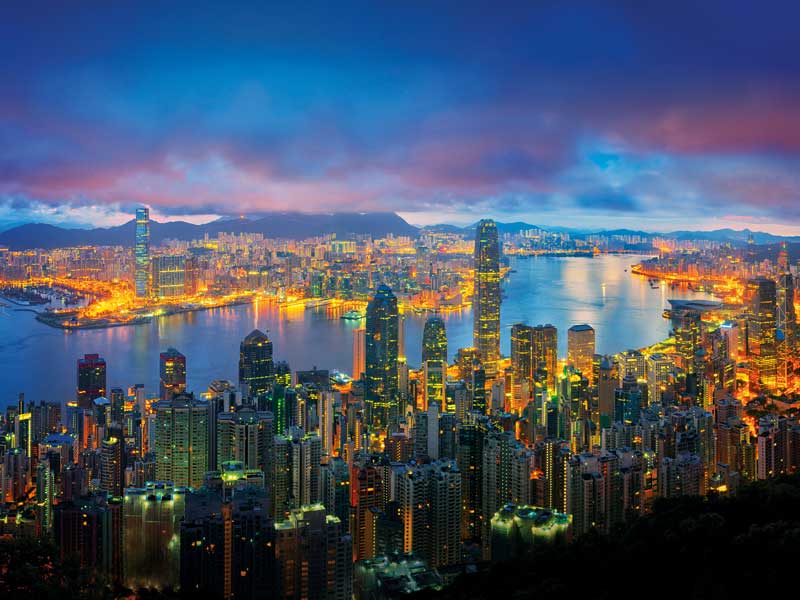 The ‘one country, two systems’ principle has allowed Hong Kong to retain its free market freedoms while also enabling it to act as a gateway to the Chinese market
Government policy | Strategy
Author: Barclay Ballard

Hong Kong’s position as a global financial heavyweight has long been secure. The city-state’s commitment to free market principles has seen it evolve from a mercantile shipping hub into a thriving, service-orientated economy. The adoption of the ‘one country, two systems’ principle in 1997 has allowed Hong Kong to retain its economic freedom while also acting as a gateway to the rapidly growing Chinese market. The international success of its stock exchange is even more impressive: as of the end of 2017, Hong Kong had more than 2,000 listed companies, a total market capitalisation (see Fig 1) of HKD 34trn ($4.34trn) and had been named as the number one global IPO venue for five of the previous nine years. Last year, however, that coveted top spot was taken by New York, while Hong Kong had to settle for third place, behind Asian rival Shanghai.

In fact, the total funds raised on the Stock Exchange of Hong Kong (SEHK) in 2017 amounted to just $35bn, a 15 percent fall when compared with the previous year. This can be partly explained by competition between stock exchanges being fiercer than ever; globalisation and technological development have encouraged businesses to seek public capital in international exchanges instead of their domestic markets.

Costs, access to a particular investor community and increased liquidity are all factors that determine a company’s decision to list on a particular exchange but, increasingly, regulatory issues also play a part. Late last year, Hong Kong Exchanges and Clearing (HKEX), the official operator of the city’s stock exchange, announced it had begun drafting rule changes that would allow for dual-class share listings, bringing the exchange in line with New York.

While international competition makes it more difficult than ever for one market to hold more stringent rules than another, the loosening of regulations around dual-class shares has raised concerns among corporate governance advocates. The move may encourage business owners to choose Hong Kong over New York, but minority investors could be the ones losing out.

Falling behind
The root of Hong Kong’s decision can be traced back to September 19, 2014, when Chinese e-commerce giant Alibaba decided to host its IPO on the New York Stock Exchange (NYSE). By the time the IPO had concluded, the company had raised a staggering $25bn – still, to this day, the largest IPO ever conducted. As cheers rang out in Alibaba’s business headquarters in Hangzhou and across the New York trading floor, the reaction in Hong Kong was very different.

HKEX CEO Charles Li had already faced criticism for focusing on commodity firms rather than technology-orientated ones, and now he stood accused of letting New York waltz in and steal the most valuable listing of all time. What’s more, Alibaba made it clear that, although the IPO was a runaway success, in different circumstances it would have preferred to be listed in Hong Kong.

The reason New York eventually came out on top was Alibaba’s insistence on a dual-class listing, which would allow its 28 partners to retain majority control of the board despite only owning around 13 percent of the company. Although this practice has been allowed on the NYSE since the 1980s, Hong Kong has stuck rigidly to the ‘one share, one vote’ principle. Aurelio Gurrea-Martínez, a fellow in Corporate Governance and Capital Markets at Harvard Law School, believes dual-class shares, while not necessarily harmful, are open to abuse.

“Through the use of dual-class share structures, some shareholders (usually the company’s founder and its top executives) are able to pursue their vision and enjoy the full benefits of control without paying for this privilege,” Gurrea-Martínez explained. “They become what many authors call ‘controlling minority shareholders’. This means that not only will they run the company as they see fit (sometimes for their own interest or portfolio, and not for the interests of the shareholders as a whole), they will also enjoy the private benefits of control.”

Hong Kong may have resisted the pressure to match New York’s more relaxed approach to stock market regulations until now, but it wasn’t for want of trying. At the time of the Alibaba IPO, a committee that had been formed to review SEHK rules was split on whether to make an exception for the e-commerce giant. Ultimately, it decided waiving the regulations to accommodate a single company would damage the exchange’s reputation. Further, formalising a rule change to allow dual-class shares is not a quick process and, as Hong Kong deliberated, New York stepped in.

Playing catch-up
“The question Hong Kong must address is whether it is ready to look forward as the rest of the world passes it by,” Alibaba Executive Vice Chairman Joseph Tsai wrote in a blog post in 2013, ahead of the company’s record-breaking IPO. “As a company with most of our business in China, it was natural for Hong Kong to be our first choice.”

Following Alibaba’s decision, a number of other Chinese technology firms have looked elsewhere for their IPO listing. Just three percent of listings by market value on the SEHK have been ‘new economy’ companies in the last 10 years, compared with 47 percent on the NYSE. Similarly, nine of the 10 largest IPOs conducted by Chinese digital firms have been in the US.

Although dual-class shares – or weighted voting rights, as they are sometimes known – have been around for decades, they have experienced a surge in popularity as the digital economy has taken off. Dual-class shares are particularly popular with technology firms, as they give entrepreneurs the freedom to pursue their unique, singular vision without having to seek approval from other investors. What’s more, many digital companies decide to go public before they have become profitable. In this case, the kind of long-term strategy likely to be implemented by a company founder is preferable to investors seeking short-term returns.

“On average, the founders of young tech companies are more likely to add value than their peers in mature companies with a more traditional business,” Gurrea-Martínez explained. “That’s why most companies with dual-class shares are tech companies or start-ups with a novel product or idea.”

In order to attract this new breed of company, the SEHK has finally decided to join the likes of the US, Brazil and Canada in relaxing its rules on dual-class shares. Hong Kong’s decision will not have been taken lightly, with Gurrea-Martínez noting that “many institutional investors have already shown their concerns about the reform”, but the move has been welcomed in some quarters. Speaking earlier this year, Alibaba founder Jack Ma revealed the e-commerce firm would now consider listing its subsidiaries in Hong Kong as a direct result of the rule change.

Getting back in front
When deciding whether to change the regulations surrounding dual-class shares, the SEHK had to carefully weigh up the pros and cons. The loosening of rules could help to attract the new digital firms that make up an increasingly large proportion of the global economy, but could also damage overall trust in the exchange, making it more difficult to attract IPOs from other industries. Further, there are other issues – beyond weighted voting rights – that tech companies consider when deciding where to list. “The liquidity and depth of the stock exchange are crucial factors,” Gurrea-Martínez said. “As is the reputation, qualification and independence of the regulator.”

Even as Hong Kong moves to lift the ban on dual-class shares, the city-state knows better than to get involved in a regulatory race to the bottom

The fact Hong Kong was able to become one of the world’s leading financial hubs, despite banning dual-class shares for more than three decades, suggests it already had a great deal of IPO pulling power. And it seems this pulling power was beginning to have a slow but steady effect on new economy businesses. In fact, the fourth quarter of 2017 saw a surge in tech listings on the SEHK, with China Literature’s $1.1bn IPO the largest recorded.

Despite recent successes, those in charge of the Hong Kong exchange know that competition will be fiercer than ever this year. Some of the leading lights of the Chinese tech scene – including Didi Chuxing, Tencent Music and Xiaomi – are all rumoured to be planning an IPO at some point in 2018. After missing out on Alibaba’s record-breaking IPO four years ago, it is understandable if Hong Kong feels the need to align its regulations with its competitors.

Even as Hong Kong moves to lift the ban on dual-class shares, the city-state knows better than to get involved in a regulatory race to the bottom. Gurrea-Martínez believes the SEHK is sophisticated enough to punish value-destroying founders going public with dual-class shares, but “could still implement new rules to enhance the protection of minority investors”.

These new rules are on the way: there will be restrictions on the type of companies that can issue dual-class shares, for example, and the Hong Kong Government is launching a much-needed overhaul of its auditing regulations. More safeguards may be needed as the stock exchange gets accustomed to its newfound acceptance of weighted voting rights.
If Hong Kong wants to get ahead of New York, Shanghai and the rest of the world’s top exchanges, it cannot simply follow the lead of others. It must create a regulatory framework that is right for its particular market and, crucially, one that is attractive to both billionaire tech entrepreneurs and public investors alike.