Many industries rely on the sand trade, but the valuable resource is often exported at the expense of local communities and the environment. Experts are warning that regulation must improve, or we risk pushing the material to the point of exhaustion 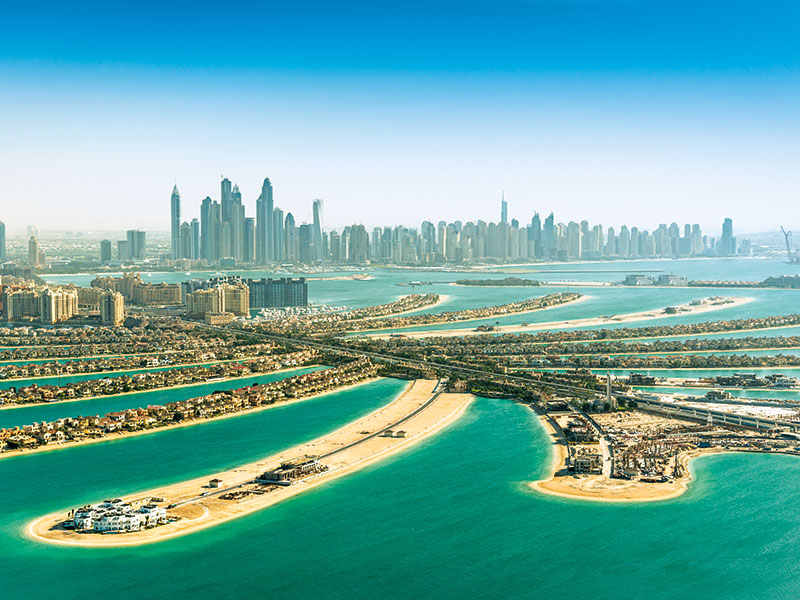 When work began on the Burj Khalifa tower in 2004, Dubai was forced to import sand from Australia as it had already exhausted its marine resources creating the artificial islands of the Palm Jumeirah
Featured | Infrastructure
Author: Charlotte Gifford

Sand seems like a material we have in absolute abundance, but it’s actually one of the most used natural resources on the planet. Globally, we extract over 40 billion tonnes of sand every year, dredging it from beaches and riverbeds and hauling it out of overturned forests. “Find some random river in Asia and zoom in on Google and you realise that there’s mining going on pretty much everywhere,” said Mette Bendixen, a research fellow at the Institute of Arctic and Alpine Research at the University of Colorado Boulder.

Sand is a key ingredient in concrete, glass and computer chips. As such, demand for the material has skyrocketed ever since urbanisation accelerated at an unprecedented rate all over the world. China used more concrete between 2011 and 2013 than the US did in the entire 20th century. Our appetite for sand is so insatiable that we could soon be facing a shortage. A 2019 UN report titled Sand and Sustainability argued that extraction is now far outstripping the rate at which sand is replenished. Considering that this is the material upon which civilisation is built, there is an urgent need for more transparency around its extraction and trade.

Shaky foundations
When we imagine the Sahara’s sweeping dunes, the prospect of a sand shortage seems ludicrous. But not just any old sand can be used in construction. “The thing about desert sand is it’s too rounded,” Bendixen told World Finance. “So it’s like building with marbles. That doesn’t work. You want more angularity and you want a bigger variety of grain sizes so that you get this really good material for construction.”

As riverbanks disappear, the foundations of the infrastructure surrounding them will collapse

The best sand for construction can be found on beaches, riverbanks and seafloors. Because these places are so easily accessible, sand falls victim to the ‘tragedy of the commons’ principle. “Sand is very easy to extract,” said Aurora Torres, a postdoctoral researcher at the Université catholique de Louvain. “If you give a man a shovel and a bucket and a donkey to transport it, he can extract sand. So it’s very difficult to regulate.”

This lack of regulation spurs unsustainable practices, with major consequences not just for the environment but also for local populations. As riverbanks disappear, the foundations of the infrastructure surrounding them will collapse. At the same time, sand mining destroys ecosystems, ravaging communities that depend on them for their livelihoods.

Rock the boat
One of the areas where these consequences are most visible is Vietnam’s Mekong Delta. Providing half of the country’s food, this network of rivers and swamps is known as the rice bowl of Vietnam. Now, its riverbanks are being stripped away. Government officials estimate that roughly 500,000 people will have to move out of the area to escape the major coastal collapse caused by sand mining.

Even where sand extraction is regulated, there is so little enforcement that it leaves the door open to illegal sand mining, which is particularly prevalent in countries such as India, Kenya and Cambodia. In India – the second-most rapidly urbanising country in the world – this illicit activity generates $2.3bn a year. Here, sand is so precious that dozens have died in disputes with the gangs mining it or while reporting on the illegal trade.

Historically, extracted sand has been used locally – for obvious reasons. “Because it’s a bulk material, there is a huge cost in the transportation of sand, so ideally you should bring it to the consumer as soon as possible,” said Torres. However, with sand resources running low in some countries, many are looking further afield. “We’re seeing an increasing tendency towards a global trade of sand,” said Bendixen. “So countries are willing to import sand from rather long distances.”

Dubai, for example, is famous for its ambitious construction projects. In 2004, when work began on the Burj Khalifa tower, which is now the world’s tallest building, the country was forced to import sand from Australia because it had already exhausted its marine resources creating the extravagant artificial islands of the Palm Jumeirah, which required 186.5 million cubic metres of sand to build.

Growing pains
Sand is also used in territory expansion. Singapore has grown its landmass by more than 20 percent since the mid-20th century by importing sand from its neighbours. But for the country to grow this much, others have had to shrink. “In Indonesia, we’ve seen islands vanish; they’ve disappeared because they’ve been snuck away,” said Bendixen.

Several countries, recognising that they are destroying their own rivers and forests for the territorial expansion of their wealthier neighbour, have decided that enough is enough. In July 2019, Malaysia banned all sea sand exports, despite being Singapore’s biggest source of it. This could cause problems for major development projects in Singapore, including the Tuas mega port, which is expected to be the biggest container terminal in the world upon completion.

The lack of a price index on sand makes it difficult to gauge how Malaysia’s ban could financially impact Singapore. However, a similar incident in 2007 provides some clues. When Indonesia banned sand exports to Singapore, the price of sand in Singapore leapt from SGD 25 ($13.80) to SGD 60 ($33.12) per cubic metre and construction activity in the city-state was brought to a near standstill. Singapore has since learned its lesson and begun stockpiling sand. This may have created a buffer, but these supplies won’t last forever.

Singapore’s lack of natural resources forces it to venture overseas for sand, but other countries may go abroad in search of higher-quality materials. State-owned Chinese companies are obtaining permits in Mozambique to extract minerals such as zirconium, ilmenite and titanium from heavy sands. “These more expensive heavy minerals are used in computer chips and all sorts of electronics,” said Bendixen.

The latest of these companies is Dingsheng Minerals, which estimates it will process 100,000 tonnes of sand a day once it’s up and running. This activity has serious consequences for the environment and communities in the region. A 2018 report by Amnesty International concluded that the activities of Chinese mining company Haiyu likely contributed to a flash flood in Mozambique in 2015 that left 290 people homeless.

Murky waters
Because of the damage the Mekong River incurred as a result of sand extraction, Vietnam and Cambodia prohibited exports from the area in 2009 and 2017, respectively. However, it’s unclear whether the two nations actually followed through on the ban: both countries were among the 15 biggest sand exporters in 2018, Mekong River sand is still advertised online, and Singapore continues to record imports of sand from Cambodia. Murky statistics like this are commonplace in the industry. Although Singapore claimed to have imported only three million tonnes of sand from Malaysia in 2008, the actual figure was more like 133 million tonnes, according to Malaysia’s own statistics, most of which was smuggled.

The absence of any real monitoring system contributes significantly to sand mining’s unsustainability. “There are some global statistics that say, ‘This is the import, this is the export from different countries’, but it’s not exhaustive at all,” said Bendixen. “We say that we use between 32 and 50 billion tonnes of sand per year… but [there’s] quite a big difference between those two numbers. And since a lot of this mining is also illegal, it’s not being recorded in the public domain. So we really don’t possess that overview.”

If the information around the origin and trade of sand were more transparent, construction companies would be better placed to make informed decisions about the resources they use. Arguably, the need to do so is greater now than ever before. With the rise of environmental ratings, companies are increasingly motivated to incorporate sustainability into their decisions.

But surveillance alone may not be enough: the industry urgently needs more alternatives to sand. Recycling concrete is one solution, but this is unworkable in developing countries where there’s less of the material in the first place. “There might be another alternative to the extraction of sand from rivers and marine ecosystems, which is crushed rock,” Torres told World Finance. However, she points out, this is more expensive and not all areas have suitable types of rock.

The scientific community could yet engineer a promising alternative. At Imperial College London, a team of researchers has created a product called Finite, a material that is as strong as concrete but has half the carbon footprint and uses that previously unsuitable material: desert sand. However, the product is still in its early stages and has yet to be manufactured on a large scale.

With the urban population rising by 1.63 percent annually, our sand consumption shows no sign of slowing. The UN’s Sand and Sustainability report suggests that the international community is beginning to recognise the scale of the problem. However, the sand crisis is still seen by many as a niche ecological problem rather than a global issue with wide-reaching consequences for the construction, glassmaking and technology industries. Until its trade is more closely monitored and regulated, sand will continue to be exploited, threatening the very building blocks of modern society.