Italy’s infrastructure woes appear to worsen with each passing year, with the most recent tragedy – the well-documented Genoa bridge collapse last August – leading to the deaths of dozens of people. The country needs a drastic sector-wide rethink to prevent such a catastrophe from reoccurring 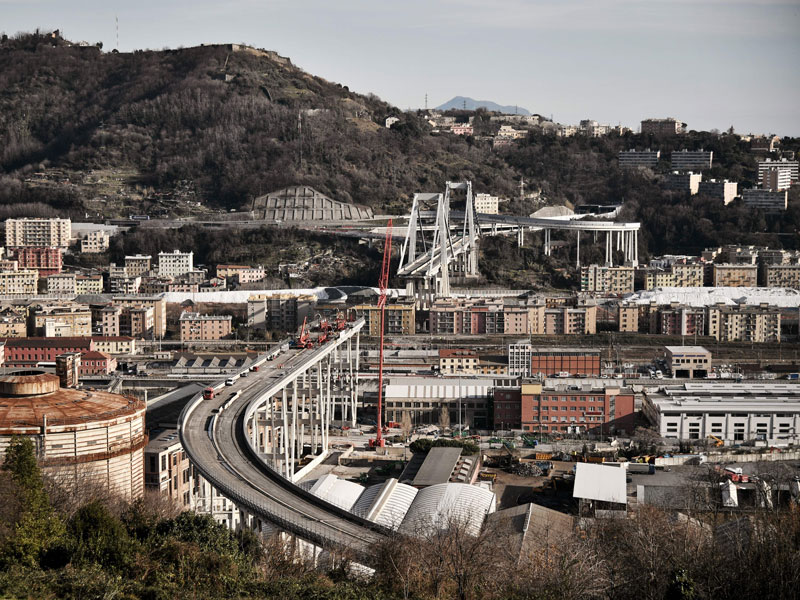 It’s tragically ironic that the country that houses the near-2,000-year-old Colosseum, along with numerous other millennia-old structures, is also responsible for infrastructure that it is crumbling after a mere five or six decades of being built.

Despite publicised benefits, the TAV project has received its fair share of animosity from both the public and various politicians

As of late, this sorry state of affairs has come to a head in terms of public backlash. Protests intensified in Northern Italy at the start of the year, with the cause of contention being the construction of a 270km rail line linking the French city of Lyon with its Italian counterpart, Turin. The Treno Alta Velocità (TAV) will include a 57km tunnel under the Alps, which will be one of the longest rail tunnels on the planet. With an expected average speed of 200km/h, the line will significantly reduce transportation time between the two European nations. The TAV also promises to cut carbon emissions and the use of fossil fuels.

A mountain rail route that opened back in 1872 first connected Lyon and Turin, but in spite of some improvements over the years, speed and load weights have remained largely restricted due to topographical challenges. Then, in the early 1990s, came plans for the TAV, with promises to make trade cheaper and more efficient for both countries. Now in full motion, the cost of the €25bn ($28.38bn) project is being split three ways: Italy will foot 35 percent, or €8.6bn ($9.76bn), of the cost, with France paying 25 percent and the EU the remaining 40 percent.

But despite its publicised benefits, the project has received its fair share of animosity from both the public and various politicians. For many, it has been hard to swallow a multibillion-dollar bill when the country’s economy continues to falter (see Fig 1) and renovations to existing infrastructure are desperately needed. And herein lies the problem – as explained by Enrica Papa, Senior Lecturer in Transport at the University of Westminster: “There has never been a culture of planning and maintenance of public assets in Italy, especially transport infrastructures”.

Maintaining failure
The anguish of protestors in Turin is understandable given recent events that have come to epitomise this culture. One rainy day last August saw the horrifying collapse of a bridge in Genoa: a 50m-high section came crashing down onto the buildings and vehicles below, killing 43 people and plunging massive slabs of reinforced concrete into the riverbed nearby. As news spread around the world, the governing coalition in Italy – comprising the League and the Five Star Movement – cast blame on Autostrade per l’Italia, the private firm responsible for the nation’s motorways, calling for a €150m ($170m) fine and the withdrawal of its contract. Astonishingly, the Morandi Bridge, which was inaugurated in 1967, was the 12th bridge to collapse in Italy since 2004. Five bridges fell between 2013 and 2018 alone. But it’s not just this particular type of infrastructure that is falling apart and causing untimely fatalities: in 2009, for instance, numerous homes in Messina were swept away in floods and mudslides, killing 37 people and injuring a further 95. Despite the area being a high-risk area for hydrogeological activity, with landslides taking place repeatedly over the years, nothing was done until it was too late. In Italy, this kind of story has become all too familiar.

“The tragedy of the Morandi Bridge in Genoa sums up in itself and certifies the lack of a culture of planning and maintenance of infrastructure schemes,” Papa told World Finance. “There had been dozens of other accidents generated by the same tragic lack of maintenance planning – I remember an accident a few years ago on the Naples-Avellino motorway that caused tens of [injuries] due to poor maintenance of the safety barriers.”

Cost of the project

of the project will be paid for by France

of the project will be paid for by Italy

of the project will be paid for by the EU

When news about Genoa broke, conflicting information was spouted from various parties. For example, Stefano Marigliani, the motorway operator official responsible for the area, told Reuters that the bridge was “constantly monitored and supervised well beyond what the law required”, and that there was “no reason to consider the bridge dangerous”. It was also reported that restructuring had been carried out in 2016. However, according to The Straits Times, Angelo Borrelli, the head of Italy’s civil protection agency, said he was not aware of any maintenance work on the bridge. This discrepancy alludes to a bigger, more entrenched problem.

Italy’s infrastructure woes find their roots in a construction boom that occurred in the 1960s. “At the end of [the Second World War], Italy was a country on its knees: 50 percent of the residential estate had been destroyed; more than 60 percent of the industrial assets were no longer able to produce; and 70 percent of public assets, especially transport infrastructures, were unusable,” said Papa. Consequently, the incumbent government set forth on a new system of actions and schemes, which saw a flurry of bridges, buildings, roads and schools built.

But the flurry was part of the problem. “The economic and social success… of land use and environmental resources gave impetus, in the post-war years, to a strategy of wild exploitation,” Papa explained. “This happened without any respect, neither for the ecological resources nor for the landscape resources… There was no concern for the primary needs of the local populations and… no simple rules for the government of territorial transformations were implemented.”

According to Papa, one of the government’s biggest mistakes was the transfer of various public infrastructure assets – particularly the most profitable ones – to large companies, or “entrepreneurial families”, in order to reduce costs. “This has led to a substantial financial surplus in the pockets of the dealers but, paradoxically, scarce, sometimes very little, attention to the maintenance of the assets entrusted to them. The disaster of the Morandi Bridge was the epilogue of this announced tragedy.”

Mafia involvement
Given this overarching cost-cutting approach, it may come as little surprise that many of the works in question were made with cheap or weak materials. But what may surprise some is that none other than the mafia aided in this unsavoury goal.

Number of Italian bridge collapses since 2004

Number of Italian bridge collapses between 2013 and 2018

“Mafia firms generally use poor materials and perform a shoddy job because their goal is to extract a quick profit,” said John Dickie, a professor of Italian studies at University College London and author of several books about the mafia.

Many firms that worked with the mafia used unfortified concrete, a material that contains a higher proportion of sand and water than regular cement. As such, it poses a big risk to the integrity of associated infrastructure projects. “During core sampling analysis of tunnels and bridges, I have found cement blocks with a resistance three times weaker than the norm,” Nicola Gratteri, Catanzaro’s anti-mafia chief prosecutor told The Guardian following the Genoa incident.

He also referred to several sites that were under investigation following their partial collapse. The works had been completed by the ‘Ndrangheta, a Calabria-based mafia organisation that has run riot in the region’s construction sector since the 1960s. Indeed, not only did the business become the group’s second-most profitable business (after drug trafficking), it also received government support when mafia boss Vito Ciancimino became Palermo’s head of public works in 1959.

“The mafia problem undermines confidence in the ability of government and private enterprise to invest efficiently in infrastructure. Political corruption does the same thing. People assume that the money will be wasted or stolen, and so it is difficult to summon the political will to invest,” Dickie told World Finance.

According to Dickie, mafia involvement in public construction works still occurs to this day, and subcontracting in particular is a big problem. “Subcontracts tend to go below the regulatory radar. They can often be awarded without following the rules on fair tendering. Mafia firms like to use subcontracts as a way to disguise extortion payments,” Dickie explained. “Take the case of earth-moving and the disposal of site waste. These are sectors of the construction industry where mafia clans have a strong presence. But that’s not because mafiosi are really good at the earth-moving business. Rather, it’s often because earth-moving businesses are easy to set up and operate: you just need a few trucks and people to drive them. You can then make an inflated bid for a subcontract which, in reality, is just a cover for extortion payments – made in response to mafia threats and vandalism.”

A political football
With incidents such as the Genoa bridge collapse making worldwide news, Italy’s anti-establishment parties have come out swinging, particularly with regards to spending restrictions enforced by the European Union.

To prevent history from repeating itself over and over, Italy needs a fresh approach

“We should ask ourselves whether respecting these [budget] limits is more important than the safety of Italian citizens. Obviously for me, it is not,” Deputy Prime Minister Matteo Salvini, who leads the populist, right-wing League party told the press in August.

His statement, however, stands in stark contrast to previous claims made by governing partner Five Star. Part of the group’s early appeal was its opposition to pricey infrastructure projects, and in terms of the Morandi Bridge specifically, Five Star had dismissed warnings that the bridge was dangerous, referring to them as a “children’s tale”. This comment has since been removed from the party’s website and it has somewhat softened its anti-infrastructure stance, but continues to oppose the TAV despite pleads from the EU to stay on track.

As such discourse illustrates, it would seem that unremitting finger-pointing continues to characterise Italian infrastructure. The Morandi Bridge, for example, saw repeated calls for repairs or a complete overhaul throughout the years, but conflicts between political groups and private companies about whether the spending was justified, and who should bear the cost, endured. In the end, profits were prioritised over safety. Adding insult to injury, the blame for the bridge’s avoidable collapse has shifted from one group to other.

A considerable overhaul is needed. “On a social and political level, Italy needs to stop mourning; the country needs to regain the spirit of [the] 1950s and 1960s, with the desire to look to the future,” said Papa. “[The] populist government is, unfortunately, going towards the opposite direction. The recent discussion of the Turin-Lyon high-speed [railway] is an example.” On the technical level, Papa believes that Italy must define a new infrastructure plan, promote education in the field and place greater importance on new technologies.

Simply, to prevent history from repeating itself over and over, Italy needs a fresh approach – one rooted in accountability and transparency. The involvement of criminal organisations and the highly ineffective system of subcontracting can thus be fleshed out. Following this, rebuilding and maintaining structures with sustainability at the forefront can occur. Certainly, undertaking this mammoth task across numerous sites and regions will cost the country billions – but taking shortcuts didn’t exactly work out the first time round.