How to deliver 4,500 tons of material during a pandemic

Sometimes the task at hand can appear so daunting that the enormity of what must be achieved can be completely overwhelming. If that is the case then strong leadership and clear communication of a strategic plan can overcome this 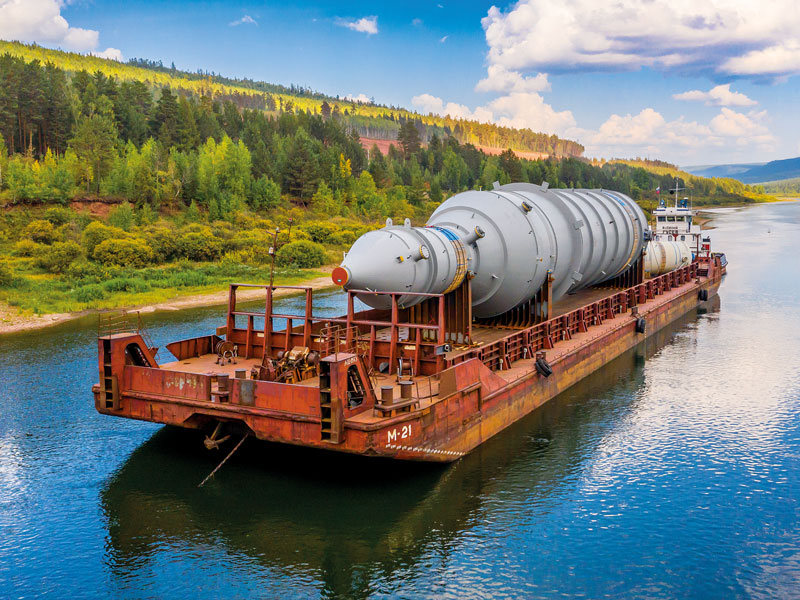 Transporting a 600-ton ethylene polymerisation reactor takes a lot of preparation. So an operation to deliver 4,500 tons of equipment more than 12,000km – including five oversized units weighing 200 to 650 tons and measuring between 40 and 82 metres – to a new polymer plant near the Russian town of Ust-Kut is not an easy undertaking. The three-month operation carried out by Irkutsk Oil Company (INK) was in planning for four years. “We worked with our partners to iron out every nuance, from the exact carrying capacity of ships to plausible weather conditions,” says deputy general director Mikhail Larin. “When it seemed that every risk had been anticipated, and the equipment was ready to go, the COVID-19 pandemic hit.”

Despite the unprecedented disruption caused by suspended manufacturing and closed borders, the operation was a success. The journey from South Korea, where the equipment was assembled, to south-east Siberia took hard work by a collaborative team and company experts, as well as transport and logistics specialists. The wealth of untapped oil and gas reserves in eastern Siberia has been attracting attention from major market players for a number of years; complex operations such as this enable the gas industry to be further explored in remote territories, an area in which INK has been leading the way.

This operation is part of a new, large-scale project to create a system for the production, preparation, transportation and processing of natural and associated petroleum gas from INK’s fields. The polymer plant at Ust-Kut will produce 650,000 tons of low and high-density polyethylene per year, using ethane as a feedstock. These polymers are widely used in the automobile and aerospace industries, as well as in textiles and medicine; the plant will grant INK access to both the Russian and international polyethylene sales markets.

The start of a long journey
In June, the operation could finally get underway. It started with a week-long loading process in Masan, a sprawling port in the south-east of South Korea, to transfer the machinery to the two ships that would carry it through the first leg of the journey. The scale of this time-intensive operation was evident before the cargo even left Masan. Once it was properly loaded, the ships embarked on a journey across the Sea of Japan and around the eastern coast of Russia, across the Okhotsk sea and up through the Bering and Chukchi seas that separate Russia and Alaska. After travelling west across the East Siberian sea, the two vessels reached Tiksi, a once bustling port in the Laptev sea that remains the most northerly settlement with a population of over 5,000. It took 26 days for the ships to travel the 8,500km from Masan to Tiksi Bay, which is 50km from the mouth of the Lena river, via which the cargo would make its way inland to Ust-Kut on a fleet of barges.

It was at Tiksi Bay that the team had to overcome the first of many hurdles. The remote port does not have sufficiently deep water levels to accept sea vessels, so the transfer of the cargo from the ships to the barges had to take place at sea. Loading at sea is incredibly complex: it requires crews to synchronise sea vessel cranes with swaying barges, account for storms and work with extreme precision. There is no room for error – in the event of equipment malfunction, recovery of an 80-metre-long, 357-ton ethylene column from the bed of the icy Laptev sea would be impossible. Stormy weather conditions made this already precarious process more difficult. “It was a very serious operation,” a member of the project team reported, praising the professionalism of the seafaring team. Fortunately, a 12-hour respite of tranquil weather – described as a “gift” by the team – ensured that the transfer was completed successfully. It took six days.

The next leg of the journey involved the fleet of nine barges sailing up the Lena river, the eastern most of the three great Siberian rivers. Larin describes this part of the journey as the “biggest risk”, as low water levels or smoke from wildfires – which, during the previous summer, had engulfed an area the size of Belgium – could cause a major disruption. Additionally, river traffic could be a problem: at one point the Lena river’s fairway is just 65 metres wide, about the width of a football pitch. At almost 20 metres wide, two barges passing one other would not leave much room for manoeuvre.

The journey upriver was planned by Sergey Kushnir, the head of INK’s nautical management department. “I worked as a captain for several years, so I knew we could deliver oversized cargo by waterway. This was the first time we transported such oversized equipment from the Tiksi Bay up the Lena river. One 89-metre-long barge carried equipment weighing 650 tonnes!” He attributes the success to the coordination and professionalism of the specialists at the Lena United River Shipping Company. “It was exciting and interesting to watch the whole process,” he added.

The barges travelled between 100km and 200km every day, with crews on rotation day and night. Thanks to their perseverance, the barges arrived in Ust-Kut safely and on time, completing the 3600km trek in 28 days. “Everyone was, of course, mentally exhausted by the final week,” said Sergey Balushkin, the captain of the tugboat. “But they were completely satisfied with their work.”

All waterways lead to the pier
Meanwhile, as the barges travelled up the Lena river, INK was busy building the infrastructure needed to unload the oversized equipment from the boats and transport it to its final destination. Constructing the hydraulic mechanism that would transfer the heavy cargo from the river to the trucks required a project team comprised of employees from the departments of supply, transport logistics and warehousing, explained deputy director of production of INK, Ruslan Krupenikov.

To construct the pier, the coastal section of the Lena river was cleared and more than 18,000 cubic metres of sand and gravel, 2,500 cubic metres of concrete and 422 airfield slabs were brought in to build a retaining wall and a site for heavy cranes. Despite the initial project outlines, in addition to contractors, having been disrupted by the pandemic, in August the Lena river pier – along with auxiliary facilities and an asphalt road leading to the main construction site – was completed in time for the boats’ arrival.

On August 24, the first barge arrived at the new pier at Ust-Kut. Two days later, with the help of two cranes, the first of the largest and heaviest units – a 55-metre-long hardening water column, weighing over 300 tons – was unloaded and installed on a modular truck. The vehicle operator manoeuvred the 40m-long truck though sharp S-shaped bends with confidence and ease, despite the cold and fog of an early morning in Siberia; moving sometimes at just 1km per hour, the drive to the final location took seven hours. The INK’s logistics department, led by Peter Klimetsky and Alexander Sheshin, directed the unloading of the cargo, a process that took just over three weeks overall. This last stage of the transportation was the most exciting, they said, “because you could see the culmination of the work that was accomplished by hundreds of professionals”. The project required the collaboration of many companies from across the globe, including Japan’s Toyo Engineering, the Netherlands’ Mammoet, Germany’s Deugro and Russia’s Kin-Mark.

The arduous, complex and extensive journey, involving marine vessels, barges, river tugs, manoeuvrable modular transporters and 750-ton cranes, lasted 91 days in total. But it is hoped that the benefits of this latest expansion by INK – already the largest private producer of hydrocarbons in eastern Siberia – will be more than worth the work it took for the equipment to reach Ust-Kut. The plant’s production of ethylene and polyethylene is licensed by Lummus Technology and Univation Technologies (UNIPOL) respectively; both licensors are global market leaders who have gone from strength to strength over 50 years of operation. The processes used in the plant will be efficient and reliable, on top of meeting environmental guidelines. INK has long been dedicated to boosting the local economy in eastern Siberia, having spent over $3bn on the development of the fields and licence areas, construction processes and transportation infrastructure since it was founded in 2000. Once complete, the now fully equipped modern plant will create 1,500 new jobs in the region. “This is a world-class project, and today world-class work is done here,” said Nikolay Buynov, chairman of the board of directors of INK, praising the unprecedented organisation and hard work. “This project will change the city of Ust-Kut forever.” In proving its commitment to developing the gas industry in Irkutsk Oblast, INK could incite renewed interest in the region. The success of this operation will no doubt inspire many more to come.