In her first policy speech, Hong Kong Chief Executive Carrie Lam set out a number of proposals on housing, inequality and technological innovation 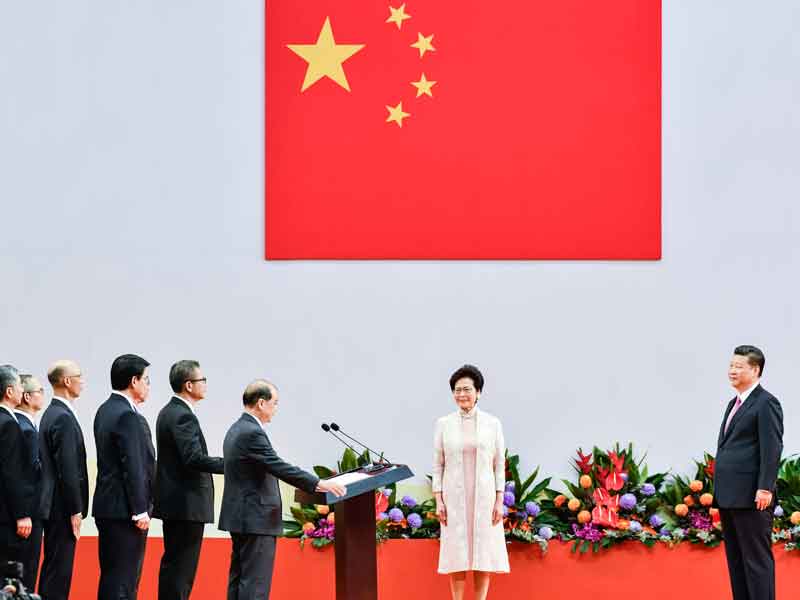 Carrie Lam is sworn in by President Xi Jinping during her inauguration in Hong Kong in July
Government policy | Infrastructure
Author: Barclay Ballard

Chief Executive of Hong Kong Carrie Lam announced new measures to address inequality and diversify the economy on October 11. As part of her maiden policy speech, Lam built upon many of the initiatives that were mentioned upon her appointment in March.

However, she failed to deliver the wide-ranging political reform that many expected of her.

The recently appointed chief executive promised to increase support for SMEs by reducing tax on profits up to HKD 2m ($256,000). The current rate of 16.5 percent will be halved for all eligible firms.

Investment in research and development will be doubled over the next five years to bolster the region’s technology sector, and the duration of paternity leave will be extended.

Lam pledged to create an additional 1,000 residential units as part of a new starter homes scheme to help families get on the property ladder

Lam’s headline proposal, however, centres on efforts to tackle Hong Kong’s housing crisis. The chief executive pledged to create an additional 1,000 residential units as part of a new starter homes scheme to help families get on the property ladder.

Highlighting the size of the task Lam faces, a recent study listed Hong Kong as the most expensive city in which to buy a home for the seventh consecutive year.

“Housing is not a simple commodity,” Lam stated. “Our community has a rightful expectation towards the government to provide adequate housing. This is also fundamental to social harmony and stability. Therefore, while maintaining respect of a free market economy, the government has an indispensable role to play in this area.”

Shares of housing development firms based in the city-state fell following the address, with markets left disappointed at the lack of concrete proposals. In particular, it was expected that greater cooperation with developers could have opened up underutilised agricultural land for residential use.

Chief Executive Lam explained that the government has no “magic wands” to solve the region’s housing problem.