There are many good reasons to fight President Trump’s travel ban, but economics isn’t one of them, writes James Stannard 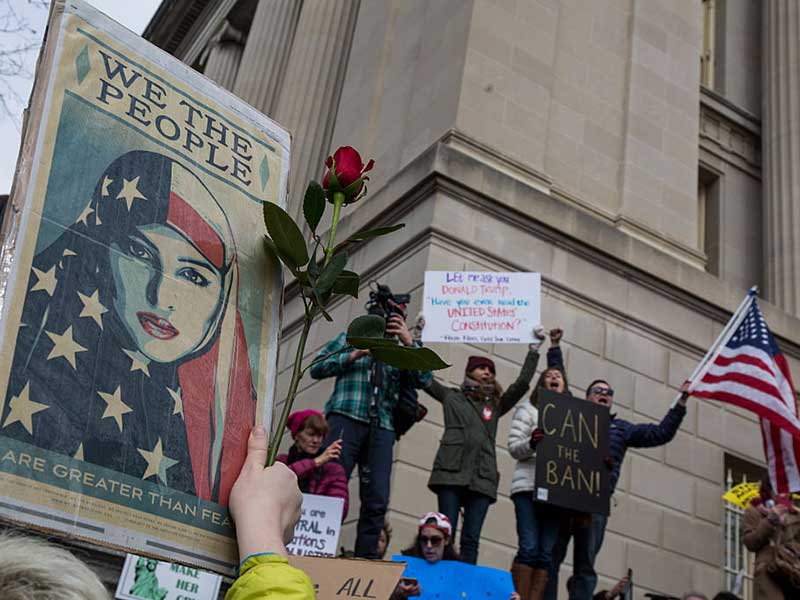 President Trump’s latest travel ban has been met with just as much controversy as the first. Hours before it was due to be implemented, a Hawaiian court struck it down, citing the “questionable evidence” backing up its national security goals. The next day, a Maryland judge followed suit. Trump has since promised to appeal both rulings.

The public outcry prompted by the ban fell into two camps: those who argued it would cause social damage and those who said it would damage the economy. But, for several reasons, only the former has grounds.

Gloomy forecasts
Pundits have suggested three major reasons the ban poses an economic threat. The first suggests it could prompt a trade war between the US and the six countries it has blacklisted. In February, journalist John Wasik warned banned states could “slap import fees on US goods and refuse to admit US citizens into their countries”. This, he argued, would “cripple the US economy”. Professor Amrita Dhillon, lecturer of Economics at King’s College London, added it “might create a certain amount of political risk”.

The second economic argument relates to a decline in tourism. Travel companies Hopper and Forward Keys reported a fall in US bookings of 10 and six percent respectively when compared to the same period last year. Both squarely blamed the first travel ban and the growing reputation of the US as an intolerant country for this drop.

The third economic argument maintains it will discourage highly skilled workers from moving to the US. The ‘brain drain’ notion fears the US workforce will get ‘dumber’ as bright foreign minds will either be refused entry or will simply be put-off living in a country where they feel alienated. In the wake of the first ban, Apple, Amazon, Facebook and Microsoft all released statements to this effect; 58 other technology companies followed suit on March 15.

Brighter outlooks
The least convincing of the aforementioned arguments is the idea a trade war would have a devastating impact on the US economy. Simply put, the US would hardly feel any negative effects as a result; the six banned states account for less than 0.5 percent of US trade in goods each year.

Professor Dhillon said: “The only way that this is going to create a huge problem for trade would be if other Muslim countries, in solidarity with these countries, decided to do something all together.

“You have OPEC as an example… but of course this depends on how important crude oil is to the US economy right now.”

Fears for the future of US tourism, meanwhile, do have sturdier statistical foundations. Nevertheless, the travel ban itself may not be the only cause of the dips reported by Hopper and Forward Keys. For example, Steve Blackburn of the North America Travel Service said his company experienced a similar, albeit smaller, dip in the same January-February time frame.

Blackburn said while “one or two clients” have made “a handful of negative comments” regarding Trump, holidaymakers might be deterred by other factors instead, “such as the dollar against sterling rate of exchange”. In his view, the ban has not “directly affected” his business at all, but did concede this may not be the case everywhere.

On the other hand, the brain drain argument is not without merit; it only takes one genius, from anywhere, to change the world. This led Google to publicly condemn any measures that “create barriers to bringing great talent to the US”. Nevertheless, a major hole in the brain drain argument is the fact the ban would only cause aggregate workforce skill levels to decline very slightly.

This is because the barrier that it builds is very minor in the grand scheme of things; in 2015, the six banned countries constituted less than 3 percent of total US legal immigration. To put this in perspective, India’s contribution was double that and Mexico’s five times as much. India’s technology institutes are also a key reason for the country’s citizens getting 70 percent of the 85,000 H-1B work visas issued by the US each year. Until Trump starts putting limits on the US’ major sources of immigration, neither Silicon Valley nor the wider economy has too much to worry about.

Few seem to be motivated by the fact the ban may restrict trade, tourism and talent… instead, they dislike its Islamophobic connotations

It could be argued the travel ban has already indirectly limited high-skilled immigration. After all, it contributes to the US’ hostile image, which could discourage the smartest individuals in non-banned areas like Europe and India from moving to the US. But, as Professor Dhillon explained: “People don’t believe everything they read… America is still attractive and… the economic incentive is still there. It’s only when the scale of the kind of discrimination or racism increases a lot that people will be discouraged.”

Although the ban will probably have a negative effect on the economy to some degree, it will most likely cause less damage than many people fear. That said, while most economic arguments fail to hold much water, it is understandable why they have been made: opponents of the ban want to prove Trump wrong from every possible angle, especially socially and economically. Few seem motivated to oppose the ban simply for its possible restrictions to trade, tourism and talent. Instead, they rally against its Islamophobic connotations.

However justifiable this aversion may be, for credibility’s sake, these pundits should conserve their arguments for more solid economic cases, such as highlighting the drawbacks of rescinding the Trans Pacific Partnership agreement. In arguing against the travel ban, critics can only make good, reliable points through social commentary. Still, this is not necessarily bad news: after all, the fight for minority rights in the US really should be a fight for the country’s soul rather than its wallet.