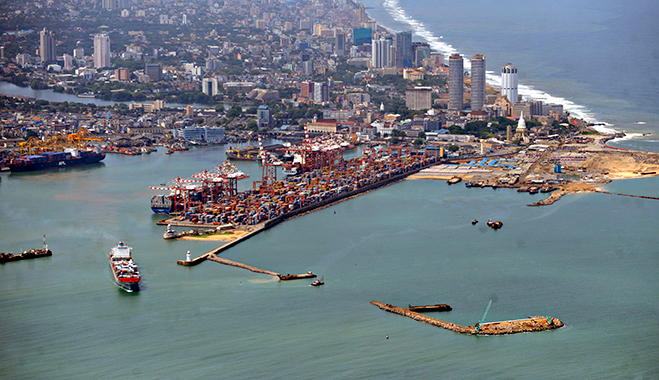 On-going construction work on a new jetty in the port of Colombo, Sri Lanka. The country has transformed itself from a war zone to an economic centre
Banking | Investment Banking
Author: Darshan Perera, CEO, NDB Investment Bank

After three decades of internal conflicts, Sri Lanka has seen a sizeable change in its economic landscape with new infrastructure developments and the revitalisation of the economy. Sri Lanka’s GDP growth bounced back to 7.3 percent in 2013, reflecting increased domestic demand and improved exports and tourism sectors. Sri Lanka’s macroeconomic performance in 2013 exceeded global expectations as GDP per capita income reached $3,280 (up from $869 in 2000, see Fig. 1). The relaxed monetary stance of the Central Bank of Sri Lanka eased inflation, maintaining it at a single digit rate. Amid the global market turmoil, the exchange rate remained stable while foreign remittance continued to grow.

The World Bank affirmed Sri Lanka’s business-friendly policies; the country ranks ahead of South Asian peers in the Doing Business rankings, reaching 85 out of 189 countries in June 2013. Sri Lanka rose in the global ladder partly by strengthening investor protection and reducing taxes on businesses.

Sri Lanka continues to gain in human development measures, ranking first in South Asia in the Human Development Index. Sri Lanka advanced to ‘high human development category’ for the first time last year, positioning the country at 92 out of 187 countries. The effective welfare, public health and education services resulted in socio economic indicators standing above peers, with 75.1 years of life expectancy at birth and a literacy rate of 95.6 percent in 2013.

In its flagship publication, Asian Development Outlook 2014, the Asian Development Bank (ADB) mentioned that an improved external environment, higher investments, and a recovery in domestic consumption would sustain a rapid pace of GDP growth in Sri Lanka in the next two years. The ADB forecast GDP growth will reach 7.5 percent in 2014 and remain at that level in 2015.

The road to Upper Middle Income status
The country is continuing its transition into an ‘Upper Middle Income Country’, aiming to achieve a GDP per capita income of $4,000 by 2016. The overall expansion of the economy will be stimulated by the 5+1 Hub concept, which focuses on developing Sri Lanka’s maritime, aviation, energy, knowledge, commercial and tourism hubs. The large-scale infrastructure development projects involved include the expressway network, improvement and development of the road network, construction of bridges, development of ports, improvement of railways and increasing power generation. Over the past four years, the said developments have laid a strong foundation to transform Sri Lanka into a strategically important economic centre.

After the cessation of the civil war, travel restrictions were removed and Sri Lanka garnered a reputation as a tourism hot spot: tourist arrivals surpassed 1.27 million in 2013, earning $1.7bn. The trend is likely to continue and the industry needs to develop significantly from its current capacity to meet the ambitious target of 2.5 million tourist arrivals by 2016. Investors in the hotel industry, led by international players, have identified the potential, with over 250 projects in the pipeline to reap the benefits of a booming industry.

Significant investments in the maritime sector – highlighted by the development of ports – and the current aviation related infrastructure developments in Katunayaka, Mattala and domestic airports have laid the groundwork for the country to be the emerging maritime and aviation hub in the region. As the emerging energy hub, the country has developed a steady pipeline of investments in electricity generation projects to ensure energy security, with the emphasis on developing renewable energy and coal power projects. Steps are underway to raise the quality standards and create a dynamic education sector to reinforce the knowledge hub. The activities relating to all these hubs will spearhead the transformation of the country into a commercial hub.

Capital markets to lead the way
The financial system will be the main source of the investments that will fund Sri Lanka’s goal of becoming a $4,000 per capita economy. With the focus on the 5+1 concept, along with well-placed economic structures, private sector involvement and entrepreneurship, the Sri Lankan economy is expected to become more resilient and diversified, and its economic growth will be sustained.

While steps have been taken by the Central Bank of Sri Lanka to strengthen the financial system by making its architecture more effective and productive, the conventional banking system alone will not be able to raise the entire requirement of capital to guide Sri Lanka towards its 2016 goals. The capital markets will need to act as the catalyst to raise funds to bridge the gap.

An action plan drawn up in consultation with stakeholders is expected to reinvigorate the capital market while regulatory framework will bring greater efficiency, transparency and accountability.

The debt market revived within the budgetary concessions extended on listed debentures, with 26 corporate debentures worth $522m listing on the Colombo Stock Exchange in 2013. Despite the low cost funding available due to the prevalent low interest rate regime, and excess of liquidity in the banking sector, the debt capital market is expected to grow. The sovereign bond issue, oversubscribed 8.3 times in April 2014, was able to fetch a tighter yield of 5.125 percent – reflecting the continued confidence placed by international investors.

The Sri Lankan equity market made a slow recovery, with policy directions advocating monetary easing measures since December 2012. During the 12-month period up to May 2013, the ASPI wavered around the 6,000-point mark, closing at 6,263 points. Due to the lacklustre performance in the equity market, the IPOs were almost non-existent, with only one listing in 2013. The four IPO listings by the end of June 2014 indicate a positive change in market sentiment. It is noteworthy that, since May 2014, the stock market has seen a drastic improvement in the indices, with ASPI crossing the 6,800-point barrier and average daily turnover increasing to LKR 1,276m (USD 10m).

NDBIB raised $322m of funds in 2013, concluding its most successful year to date. NDBIB has established a stronghold in listed corporate debentures in the past year as the leader in a fragmented market of more than 10 players. The bank had a more than 40 percent share in terms of both the number of issues and total funds raised. NDBIB remained the market leader in the non-banking and financial sector fund raisings, maintaining an 80 percent market share. NDBIB structured the largest-ever corporate debenture in Sri Lanka for its parent company, the National Development Bank.

In its continuing quest for innovation, NDBIB introduced multiple green-shoe options in the event of an oversubscription for debentures and structured the first ever securitisation of future receivables of broker advances. NDBIB – together with its sister company in Bangladesh, NDB Capital – arranged a syndicated loan facility, comprising financial institutions both in Sri Lanka and Bangladesh, for Lakdhanavi (a Sri Lanka-based premier company in the power and energy sector) to set up a heavy fuel thermal power plant in Rajshahi, Bangladesh.

NDBIB was actively engaged in the equity market via private placements and extended advisory services despite the moderation in activity on the Colombo Stock Exchange in 2013. Adding to its list of achievements, NDBIB acted as financial advisor to the largest share repurchase in Sri Lanka on behalf of its parent, NDB Capital Holdings. NDBIB was also financial advisor to Hemas Manufacturing’s acquisition of a 72 percent stake in JL Morison Sons & Jones (Ceylon). NDBIB advised and acted as the Manager to the Mandatory Offer and the Voluntary Offer arising from the acquisition.

NDBIB strives for professional expertise in its team, which is made up of highly qualified individuals with multi-disciplinary backgrounds. The corporate culture of NDBIB is driven by the highest ethical standards with honesty and integrity as its hallmarks. NDBIB adheres to strict corporate governance, transparency and ethical guidelines and has adopted the CFA Code of Conduct, a formal compliance procedure and industry best practices.

NDBIB has set its sights on further strengthening its global reach by seeking strategic alliances with foreign distribution channels in order to meet the growing thirst for capital in Sri Lanka. Leveraging the solid foundation set in 2013 and collaborations with the NDB Group network, NDBIB looks forward to a successful year ahead.