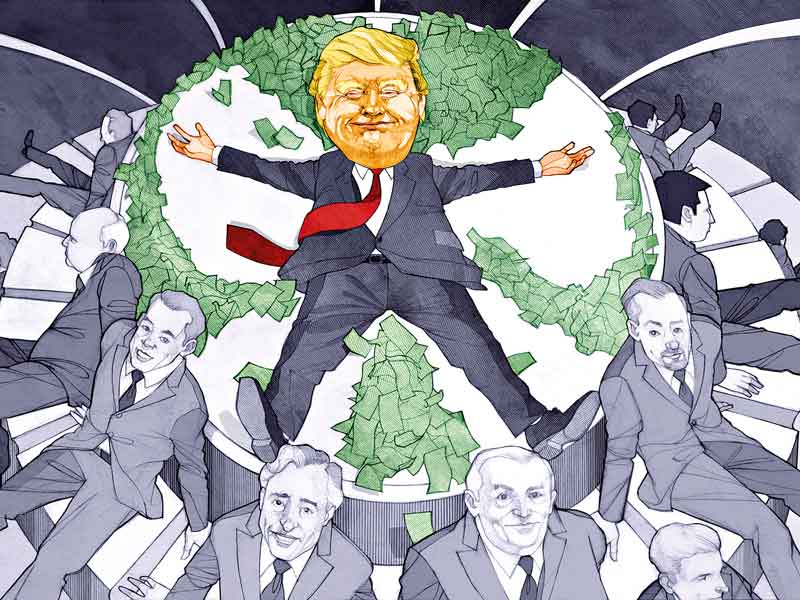 Although US plutocrats may disagree about how to rank the country’s major problems – inequality, slow growth, low productivity, opioid addiction, poor schools and deteriorating infrastructure – the solution is always the same: lower taxes and deregulation, to ‘incentivise’ investors and ‘free up’ the economy. President Donald Trump is counting on this package to make America great again.

It won’t, because it never has. When Ronald Reagan tried it in the 1980s, he claimed that tax revenues would rise. Instead, growth slowed, tax revenues fell and workers suffered. The big winners in relative terms were corporations and the rich, who benefited from dramatically reduced tax rates.

Trump has yet to advance a specific tax proposal. But, unlike his administration’s approach to healthcare legislation, lack of transparency will not help him. While many of the 32 million people projected to lose health insurance under the current proposal don’t yet know what’s coming, that is not true of the companies that will get the short end of the stick from Trump’s tax reform.

Unattractive options
Here’s Trump’s dilemma: his tax reform must be revenue neutral. That’s a political imperative. With corporations sitting on trillions of dollars in cash while ordinary Americans are suffering, lowering the average amount of corporate taxation would be unconscionable – and more so if taxes were lowered for the financial sector, which brought on the 2008 crisis and never paid for the economic damage. Moreover, Senate procedures dictate that to enact tax reform with a simple majority, rather than the three-fifths supermajority required to defeat an almost-certain filibuster by opposition Democrats, the reform must be budget-neutral for 10 years.

This requirement means that average corporate tax revenue must remain the same, which implies that there will be winners and losers: some will pay less than they do now, and others will pay more. One might get away with this in the case of personal income tax, because even if the losers notice, they are not sufficiently organised. By contrast, even small businesses in the US lobby Congress.

Most economists would agree that the US’ current tax structure is inefficient and unfair. Some firms pay a far higher rate than others. Perhaps innovative firms that create jobs should be rewarded, in part, by a tax break. But the only rhyme or reason to who gets tax breaks appears to be the effectiveness
of supplicants’ lobbyists.

One of the most significant problems concerns taxation of US corporations’ foreign-earned income. Democrats believe that, because US corporations, wherever they operate, benefit from America’s rule of law and power to ensure that they are not mistreated (often guaranteed by treaty), they ought to pay for these and other advantages. But a sense of fairness and reciprocity, much less national loyalty, is not deeply ingrained in many US companies, which respond by threatening to move their headquarters abroad.

Something from nothing
Republicans, partly out of sensitivity to this threat, advocate a territorial tax system, like that used in most countries. This holds that taxes should be imposed on economic activity only in the country where it occurs. The concern is that, after imposing a one-off levy on the untaxed profits that US firms hold abroad, introducing a territorial system would generate a tax loss.

To offset this, Paul Ryan, the Speaker of the US House of Representatives, has proposed adding a tax on net imports (imports minus exports). Because net imports lead to job destruction, they should be discouraged. At the same time, so long as US net imports are as high as they are now, the tax would raise enormous revenues.

But here’s the rub: the money must come from someone’s pocket. Import prices will go up. Consumers of cheap clothing from China will be worse off. To Trump’s team, this is collateral damage, the inevitable price that must be paid to give America’s plutocrats more money. But retailers such as Walmart, not just its customers, are part of the collateral damage too. Walmart knows this, and won’t let it happen.

Other corporate tax reforms might make sense, but they, too, imply winners and losers. And so long as the losers are numerous and organised, they’re likely to have the power to stop the reform.

A politically astute president who understood deeply the economics and politics of corporate tax reform could conceivably muscle Congress towards a reform package that made sense. Trump is not that leader. If corporate tax reform happens at all, it will be a hodgepodge brokered behind closed doors. More likely is a token across-the-board tax cut: the losers will be future generations, out-lobbied by today’s avaricious moguls, the greediest of whom include those who owe their fortunes to scummy activities like gambling.

The old lie
The sordidness of all of this will be sugarcoated by the hoary claim that lower tax rates will spur growth. There is simply no theoretical or empirical basis for this, especially in countries like the US, where most investment (at the margin) is financed by debt and interest is tax-deductible. The marginal return and marginal cost are reduced proportionately, leaving investment largely unchanged.

In fact, a closer look, taking into account accelerated depreciation and the effects on risk sharing, shows that lowering the tax rate likely reduces investment.

Small countries are the sole exception, because they can pursue beggar-thy-neighbour policies aimed at poaching corporations from their neighbours. But global growth is largely unchanged – the distributive effects actually impede it slightly – as one gains at the expense of the other. And even this outcome assumes that the other does not respond, and fuels a race to the bottom.

In a country with so many problems – especially inequality – tax cuts for rich corporations will not solve any of them. This is a lesson for all countries contemplating corporate tax breaks, even those without the misfortune of being led by a callow, craven plutocrat.