Baba Ahmadou Danpullo is now the richest man in francophone Africa. Paul Trustfull takes a closer look at how Danpullo has become so successful 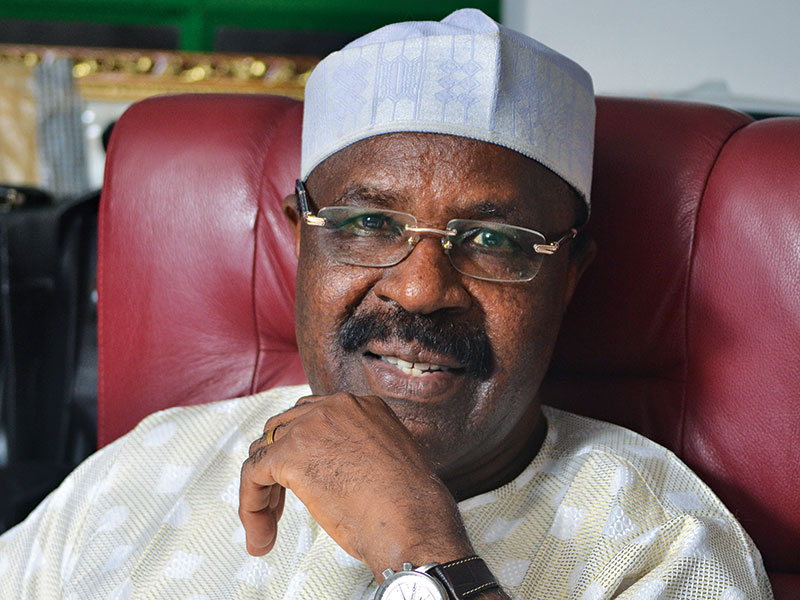 With a fortune estimated at $940m, Baba Ahmadou Danpullo is ranked number one on Forbes Afrique’s rankings – the French edition of the US magazine. Danpullo is a discreet man, avoiding the media and the fame that typically comes with immense wealth. In fact, according to many of his close friends, he does not lead a complicated life.

Danpullo once said: “I do not like the media, I always try to stay in the shade and evolve without putting myself forward, but now I am projected to the light.” If he recognises what has been written about him, he suggests that journalists have only managed to identify a small part of his life and achievements.

Guibaï Gatama, the Cameroonian editor of the weekly L’Oeil du Sahel magazine, said: “From a modest family, Danpullo started as a truck driver and owner of a few stalls, until he met Youssoupha Daouda, the Minister of the Economy and Planning.” Impressed by Danpullo’s ability to mobilise XAF 4.5m ($726,000) over a very short time, Daouda granted him the licenses to import rice and flour. He also connected Danpullo with Sadou Hayatou, who at the time led the International Bank for Commerce and Industry of Cameroon. This is how Danpullo obtained an unsecured first loan of XAF 500m ($807,000) to begin importing.

Taking care of business
Africa’s difficult economic situation in 2015 did not negatively impact Danpullo’s business tremendously, due to his diverse business assets. He invested XAF 4bn ($6.4m) to double the production capacity of his company’s flourmill, Moulin Coq Rouge (MCR). Danpullo also increased his stake in Cameroon’s Nexttel, the third largest telecommunications operator in the country. He now owns 49 percent of the company. Danpullo’s company recorded an increase in its activity of 54 percent, and revenues of XAF 21bn ($33.9m).

Danpullo operates through the family holding Baba Ahmadou Group, a diversified conglomerate with operational headquarters in Douala, the economic metropolis of Cameroon. Baba Ahmadou Group is a holding company that has many companies with just one single shareholder: the Baba Ahmadou Danpullo family. The group is present within Cameroon, South Africa, Nigeria and Switzerland. It operates in varied sectors across real estate, the agro-industry (animal husbandry, tea and cotton), transport (aviation and freight airlines), telecommunications, media and physical trading.

Within the animal breeding industry, Danpullo owns the Elba Ranch, a private, family-run breeding company founded in 1976. The company is composed of three ranches: Ndawara, Esu and Batcham. With more than 20,000 French-origin cattle (Charolais and Blonde Aquitaine) Danpullo also raises horses, with more than 3,000 species of Andalusian horses and several thousand sheep and goats.

Africa’s difficult economic situation in 2015 did not negatively impact Danpullo’s business tremendously, due to his diverse business assets

Across the agro-industry sector, Danpullo has two major tea companies: the Cameroon Tea Estate and the Ndawara Highland Tea Estate. With a total area of more than 10,000 hectares, these two companies are made up of four tea units in three regions of Cameroon: the southwest, west and northwest.

A source at the Cameroon Tea Estate said: “Currently, we produce black tea exclusively. Given the growing demand for green tea, we are also planning in the near future to make this category of tea available to the customer.”

Danpullo noted: “Our production capacity is 8,000 tonnes per year, 80 percent of which is destined for export and 20 percent sold on the local market. The altitude, soil – made of volcanic earth – and the selected clones make our tea one of the best in the world.”

Utilising all trade options
Through Société Immobilière du Cameroun (SMIC), the Baba Amadou Group is an 11 percent shareholder of Sodecoton, a company created by the Cameroonian Government to oversee the activities of the cotton-growing industry within Cameroon. In the agro-industry sector, Danpullo also owns his wheat flour manufacturing unit, MCR, which has a current capacity of 400 tonnes of flour per day for an effective production of 325T/J.

MCR produces two types of flour: regular and specially treated flour, for non-bread application. The plant’s manager said MCR plans to add other ranges to the special flour option in the medium term. These include Viennese flour, pastry and wholemeal bread. Mixtures are operated according to the quality of commercial flour needed on the basis of strict specifications.

The company also produces wheat by-products for animal consumption. These products are mixed to produce a better quality feed for livestock. In order to ensure and sustain the quality of the flour with the final consumer, MCR has set up a training centre that ensures the baker’s staff is up to date on the mill’s technical capacity, and is clear on the requirements of periodic recycling.

The Baba Amadou Danpullo Group has a presence across the telecommunications industry through telecoms operator Nexttel, of which it holds 49 percent of the shares, alongside Vietnamien Viettel. Nexttel is composed of two shareholders, namely Viettel Group and Bestinver. As the third telecommunications operator and pioneer of 3G technology in Cameroon, Nexttel launched its commercial activities in September 2014. Since then, Nexttel has claimed 3.6 million subscribers and created 1,000 new jobs, and more than 60,000 secondary jobs. The operator has invested XAF 250bn ($403.5m) since it entered the market.

Nexttel’s distribution network consists of 24 agencies, several call centres and door-to-door resellers whose main objective is to provide consumers with Nexttel products and services. With a network coverage estimated at more than 85 percent of the national territory, the company has 3.6 million subscribers and more than 1,000 employees. A Nexttel operator said: “Because we believe that technological innovation should be accessible to all, we are proud to have many rural areas now connected to our network.”

The operator added: “We are committed to providing the latest technological solutions and the best products and services to contribute to the development of the country.” The Baba Amadou Danpullo Group also owns the Cameroon-based private television channel Dan Broadcasting System. Created in 2006, the channel has been operational since June 2009.

Widespread property investment
The Baba Danpullo Group holds substantial real estate assets across Cameroon, South Africa, the US and the Federal Republic of Nigeria. These assets include warehouses, apartments, shopping centres and commercial offices. This business activity focuses primarily on investment opportunities in the commercial real estate market. Today, it has the largest portfolio of independent properties in South Africa. This includes commercial buildings and shopping centres in Johannesburg, Cape Town and Port Elizabeth.

The group oversees the management of all its properties, while maintaining a permanent asset management function to ensure property performance is fully optimised.
The South African headquarters of the Baba Ahmadou Group are located in Thibault Square, Cape Town. The building, which was recently renamed Norton Rose House, was originally called Southern Life Centre. Located downtown, it is close to the main train station in Cape Town and its urban transport networks. The building also offers public parking spaces.

Across South Africa, Danpullo has acquired many buildings, including the Marble Towers skyscraper in Johannesburg, which it acquired from the Sanlam Group in 2003. The Marble Towers is the second tallest building in the country. In 2000, Danpullo also bought the Mitsubishi head office building in Nelson Mandela Square, Sandton, Johannesburg, from Stocks and Stocks. He also purchased the His Majesty Building from Anglo American, and the Waldorf, which he sold to NBS Bank in 1998.

Danpullo is also a well known retailer in South Africa, where he owns three shopping centres, including the King’s Court in Johannesburg and the Moffett On Main Retail Centre in Port Elizabeth.

Having started out as a truck driver and owner of just a few market stalls, Baba Ahmadou Danpullo has made quite the name for himself and his family. The Baba Ahmadou Danpullo Group has grown tremendously over the years, along with the industries that Danpullo is associated with and operates in. From imports to telecommunications and real estate, Danpullo’s success can be attributed to his determination, business mind and drive, making him Forbes Afrique’s numéro un.