With Turkey on track for its second financial crisis in just two years, President Recep Tayyip Erdoğan’s repeated attempts to defy economic logic have put the nation in bad stead to weather the impact of the coronavirus 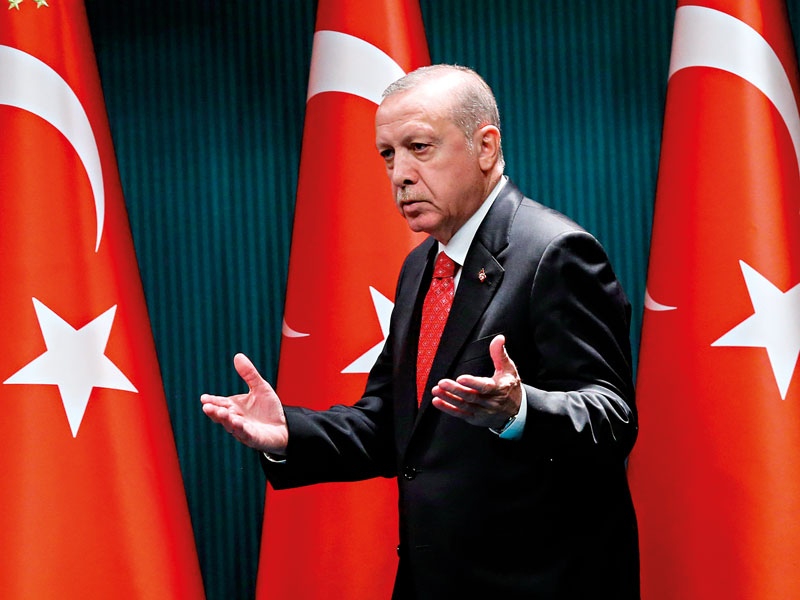 It’s not often that a pastor sparks an economic crisis, but this is exactly what happened in 2018 when Andrew Brunson, a Christian missionary who left the US for Turkey’s Aegean coast, was accused of plotting to overthrow the Turkish Government. To penalise Turkey for his arrest, the US doubled steel and aluminium tariffs, quickly sending the Turkish lira into free fall. In the space of just 24 hours, the currency had lost 20 percent of its value.

As costs for businesses and prices for consumers shot up, Turks took to social media to rail against the US. Many citizens filmed themselves burning dollar bills, one Turkish butcher ‘minced’ his notes, while another man took a hammer to an iPhone. A columnist for the Hürriyet Daily News later pointed out that, to upload the video, the protestor probably used another iPhone, or at least a phone with an operating system made in the US.

Now, Turkey could be heading for its second currency crisis in just two years. The lira weakened 16 percent in the first five months of 2020 as the coronavirus pandemic triggered massive capital outflows from emerging markets. According to the Institute of International Finance, March saw more than $80bn in investment flee from a group of over 20 emerging economies, including Turkey.

Once again, the country is burning through its dollars – only this time, not in protest, but as part of a desperate attempt to keep the lira from depreciating. At the start of the year, the country’s central bank had roughly $40bn in foreign exchange reserves, but this figure plummeted to $25.9bn by mid-April, while state banks have sold at least $32bn worth of hard currency.

Without sufficient foreign reserves, Turkey could struggle to weather the economic slowdown caused by the coronavirus crisis, which has already deprived the country of critical income from exports and summer tourism. The country’s erratic economic policy – pushed by President Recep Tayyip Erdoğan – isn’t helping.

Except Erdoğan seems to have a deep misunderstanding of some of the monetary tools he’s deploying. He has repeatedly challenged the purpose of high interest rates, calling them “a tool of exploitation”. Even as Turkey’s inflation rose to 18 percent in August 2018, Erdoğan refused to raise interest rates, insisting it would further hike inflation.

Views like this have led economists to label the president’s economic beliefs “unorthodox”. Orkun Saka, an assistant professor of finance at the University of Sussex, told World Finance: “The mainstream economic theory suggests that a country has to increase interest rates if it wants to boost the attractiveness of its currency and to contain the inflationary expectations… The president seems to believe the opposite – in the sense that he suggests lowering rates will also lower inflation. So far in Turkey, we do not see much evidence in favour of the latter argument.”

The seemingly self-sabotaging decision to keep interests rates low has rattled investors’ confidence. On May 21, Erdoğan cut interest rates for the ninth time in a row in a bid to spur cheap credit. But analysts warn that this could simply hike inflation and deter investors from holding lira or lira-denominated assets.
There is another mainstream economic theory – called the ‘trilemma’ – that Erdoğan has defied. “The trilemma says that a country can only maintain two of the following three policy objectives: a stable currency, an independent monetary policy (to choose whatever interest rate the government wants) and free capital flows,” Saka said. “Turkey had maintained a stable currency and free capital flows for a long duration under Erdoğan’s rule. However, with the increasingly more visible preference for choosing his own interest rates in the last few years, the country is now [starting] to pay the price by having to impose capital controls.”

Overstepping the mark
As well as keeping interest rates low in defiance of economic logic, this year, Erdoğan has also taken increasingly creative steps to prop up the country’s battered currency. “As the authorities realise reserves cannot contain a depreciation trend forever, they have started strengthening their regulatory framework and putting obstacles on easily exchanging the lira across borders,” Saka said. For example, Turkish authorities introduced measures to make it more difficult for foreign investors to bet that the currency would fall. “Some of the interventions also came a bit out of the blue,” Saka said. “Such as the one where regulatory agencies initiated an investigation for JPMorgan in 2019 due to its advice at the time to short the Turkish lira.”

These attempts to prop up the lira backfired spectacularly. Restrictions on short selling and speculating about the currency spooked investors and, as a result, on May 7, the currency hit an all-time low of TRY 7.2 per US dollar (see Fig 1). Keeping the lira below seven per dollar is often described as psychologically important to Turkey. Although the significance of the number is arbitrary, the anxiety surrounding any dip in the currency is a testament to Turkey’s high levels of foreign debt. “As the foreign currency price increases, the amount of debt rises and erodes the balance sheets of the debtor companies,” said Turkish economist and writer Mustafa Sönmez. “It only serves exporters and tourism professionals – the foreign currency winners. But in Turkey, foreign exchange expenditure is heavier, so this spells trouble for the country.”

On the same day that the lira’s value plummeted dramatically, Turkish authorities introduced a transaction ban on BNP Paribas, Citigroup and UBS, further undermining investor confidence. However, the ban was only in place for four days. Saka believes there was a somewhat rational explanation for the move: “It declared a ban on the grounds that these banks failed to satisfy Turkish lira liabilities vis-a-vis local ones. This recent act seems to be a rules-based decision, though, in line with the recently updated regulations… It was a good sign that the sanctions were lifted on these banks as soon as they complied with the local rules.”

National pride
Although interventionist measures can spook investors, Saka points out that such manoeuvres are sometimes necessary in the short term. “Whether this is good or bad for the country depends on what type of investors would be discouraged by these interventions and how long the restrictions stay in place,” he explained. “Currency markets are inherently volatile and, especially in times of heightened global risk aversion, can create self-fulfilling trends where the speculation itself may become the sole reason why investors might be shorting a currency.”

However, while interventionist measures like this are common in emerging markets, Turkey has nevertheless been overzealous in deploying them. “It is not unusual for emerging markets to have an interventionary stance in the aftermath of a currency crisis,” Saka said. “We interpret this as something that countries do to stabilise their currencies. However, we also find such interventions to be temporary and to be left behind after a few years. If they become permanent features of the Turkish financial markets, then there is a risk that the country may lose investors.”

Without sufficient foreign reserves, Turkey could struggle to weather the economic slowdown caused by the coronavirus crisis

Since the stability of the lira is treated in Turkey as a key sign of the economy’s health, it is highly politicised. “Let us not use dollars,” Erdoğan told his party’s parliamentary group in November 2019. “Let’s turn to Turkish lira. Let us show our nationalism.” When the value of the lira plunged in May 2020, Erdog˘an blamed this on foreign powers intending to “destroy” the economy.

Scapegoating other countries in this way is a repeated tactic of Erdoğan’s. When Turks destroyed US dollars during the 2018 currency crisis, it was in part because Erdoğan’s strong anti-US sentiment had inspired them to do so. But while it’s true that Brunson’s arrest and President Donald Trump’s subsequent tariff increase did accelerate the lira’s fall in value, the country was already steeped in economic problems.

Need a dollar
Under Erdoğan, borrowing and foreign debt have soared. This is largely because of the president’s major infrastructure projects, which include a new airport in Istanbul, costing $11bn to build, and the Çamlıca Mosque, now the biggest mosque in the country.

This construction boom was followed by a painful hangover. “The growth rate of 2019 was close to zero and was accompanied by 14 percent unemployment, double-digit inflation and unpayable external debt problems,” Sönmez told World Finance. “The pandemic has exacerbated all these problems. Now the estimated unemployment is 30 percent, foreign capital outflow has occurred, [and] the dollar price fluctuates in the amount of seven lira. The IMF estimates the shrinkage rate by five percent, but it could exceed 10 percent.” Turkey is now juggling a toxic combination: low reserves as well as debt costs of roughly $170bn. Because of this heavy reliance on foreign capital, Turkey is considered extremely vulnerable to economic slowdown.

To bolster its depleted reserves, Turkey has been attempting to build currency swap lines between its central bank and foreign central banks. The US Federal Reserve, despite agreeing on swap lines with 14 countries, seems reluctant to lend a helping hand. Qatar, however, has offered to boost Turkey’s foreign exchange reserves by as much as $10bn – a lifeline that could help its balance of payments. The lira saw a slight rise in value after the swap line was announced.
However, it’s dollar swap lines that Turkey really needs. “If the Erdoğan government cannot find a source for the short-term debt of $170bn – which should be paid in the next 12 months – it will not be able to keep the foreign exchange price or increase,” Sönmez said. “This will affect all balances negatively.” He points out that a bailout could be on the horizon, although Erdoğan has repeatedly ruled this out as a possibility, adding: “The only option for finding outsourcing is the IMF way, which will [cost] him a heavy political price. His hope is that the effect of the pandemic in the world will pass and that money will be re-entered from abroad. But this is no longer easy.”

Turkey is highly dependent on foreign financing. But, for the last several years, Erdoğan’s heavy management of the nation’s currency has deterred foreign investors from committing the capital that the country urgently needs to balance its payments. Now, with debt high and reserves low, Erdoğan would be wise to seek the help of the IMF. But if his track record is anything to go by, Turkey’s strongman president would rather maintain his stranglehold on the economy, even if it crashes as a result.