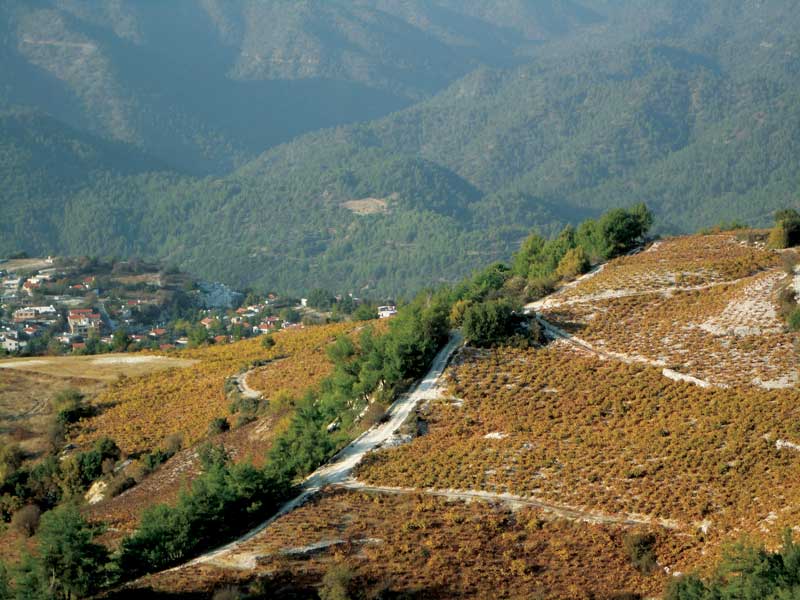 Cyprus has an incredibly rich history of wine making and research suggests that the island has been producing wine for well over 5000 years
Fine Wine Report | Markets
Author: Andreas N Psaras, Co-owner and Director, Makkas Winery

Cyprus is one of the oldest wine-producing countries in the world. So old, in fact, that recent archaeological research has shown that the island has been producing wine for more than 5,500 years. Indeed, many ancient and mythological instruments refer to Cypriot wines – especially with regards to Nama wine, otherwise known as Commandaria. It is also said that Nama was used in ceremonies worshipping the goddess Aphrodite.

In Shakespeare’s Antony and Cleopatra, Mark Antony gave the island to his beloved Egyptian queen, saying to her that she is as sweet as Cypriot Nama. Another 12 centuries later, while leaving Cyprus, Richard the Lionheart stated that he had to return to the island just so that he could taste Cypriot wine once more.

Today, Cyprus has 55 wineries, 90 percent of which are small and family-run. Despite their small production scales, Cypriot wines can proudly stand besides the produce of any country known for its fine wines; distinctions in international wine competitions are further proof of the quality of Cypriot wine.

When Makkas Winery first started producing wine, we had the privilege of having the expertise of two internationally respected experts and winemakers in our team – Samuel Harrop, a Master of Wine from France, and Duncan Forsyth, who had previously worked at the leading Mount Edward winery in New Zealand. Upon taking them to a new vineyard that we were developing at the time, I knew we were onto something special when I heard one of them say to the other: “If only I had such soil.”

The importance of family roots
A local family originally owned the winery, but they were not willing to invest the necessary funds during the initial phase of operations, which is certainly the most difficult. Consequently, they could not bring profitability to the company and had to shut down.

Number of years Cyprus has been producing wine

Number of wineries in Cyprus

Number of bottles produced by Makkas Winery each year

The new team thus took the responsibility to achieve all of the difficult goals that were required to make the winery viable and competitive, while also creating a foundation for its further development. The main objectives, which had to be achieved simultaneously and within the shortest possible time frame, were to produce high-quality wines while also boosting sales and revenue. In this regard, diversification and increased production was key – this strategy also helped with market penetration.

As some of our wines reach their optimum quality after staying in the bottle for between five and seven years, we had to create a substantial stock, especially for six of our wine labels, so as to ensure increased sales year after year. This step would also allow us to expand into international markets, thereby reducing our dependency on the local market.

The next step was to develop our vineyards in order to further improve both the quality and range of our wines, in addition to gradually becoming more self-sufficient in terms of grape intake, as most of the local wineries purchase part of the grapes they use from independent vineyard owners. This involved creating the necessary infrastructure, in terms of both equipment and expertise, to achieve all the objectives that we set out for Makkas Winery.

Scooping up accolades
Under its new leadership, which took over in 2009, Makkas Winery which started operating with a small production of 20,000 bottles of wine across four labels. Within just nine years, production had increased to 330,000 bottles per year, encompassing 14 different labels and 18 bottling options.

Following the positive response we received from customers, we decided to enter our wines into numerous competitions around the globe. During the period between 2009 and 2016, Makkas Winery won 87 ratings within the awards range in international wine competitions. In 2016, all nine wines under the Makkas umbrella were entered into the Decanter World Wine Awards, with our winery receiving excellent ratings for its entire range.

In 2014, we participated in a European programme for innovation in the vinicultural sector and won the only two innovation programmes in the entire European Union.

The first was the comprehensive vineyard management programme, which involves software that is connected with monitoring devices throughout the entire vineyard. This technology enables optimum management for better-quality grapes, and also minimises the cost of vineyard management. This programme was developed with Cyprus research and innovation company, CyRIC.

The second programme is related to the development of yeast from local indigenous grape varieties. In collaboration with the Cyprus University of Technology, the winery has since developed eight different yeasts, three of which seem to be very promising. The advantage of indigenous yeast is having the ability to produce truly distinct wines. Having successfully completed the set-up, we are now in the pilot testing phase for both innovation programmes.

Innovating to excel
The present management of Makkas Winery has managed to achieve all of its goals under the most adverse conditions. At the time of starting out, the economic crisis had hit Cyprus and severely impacted its financial sector. And yet, based on official data from the country’s Ministry of Agriculture, in 2016 Makkas Winery ranked as the fourth most successful winery in the whole of Cyprus in terms of grape intake – a position it has since maintained.

Having consolidated our position in the local market, Makkas Winery is now focused on developing and promoting the exceptional characteristics of Cypriot wines, both at home and abroad. The unique Cypriot grape varieties such as Maratheftiko, Giannoudi, Xynisteri, Promara and Morocanella can make distinctive, high-quality wines, as they are not found elsewhere in the world.

Among the most popular of our wines are Makkas Red, Makkas Xynisteri, Makkas Rosé, Makkas Syrah, Makkas Maratheftiko and Makkas Lefkada. Two new sweet wines, Makkas Nama and Makkas Muscat, will be introduced this year. Made from sun-dried grapes, Makkas Nama is a traditional Cypriot variety of dessert wine with a high alcohol content of around 15 percent and a very characteristic taste. The goldish-brown colour of Nama depends on the age of the wine: the darker the colour, the more aged the drink is. Due to the uniqueness and quality of this legendary wine, there are great opportunities for exports in markets across the world.

Our long-term strategy is also linked with volume. In order to expand the productive capacity of Makkas Winery, a new winery has been designed in a unique plot in the middle of the vineyards, with a superb view from the visiting part of the winery. The design has some pioneering features: most notably, the winery will use gravity, instead of the traditional pumping method, to improve the quality of the wine we produce. This new plot will also allow for an increase in productivity, which in turn will help Makkas Winery to expand exports and minimise risk. Moreover, the new winery will give us the possibility to produce sparkling wines, which are gaining ground in terms of consumer preference.

Our innovative new winery involves a four-storey building; the first floor, which is going to be underground, is where the wines will be bottled and stored. Tanks will be located on the second floor, while collection will be carried out on the third floor, which will be separated into two sub-planes. Sorting will be carried out on one sub-plane, and from there the grapes will be transferred – using nothing but gravity – to the tanks on the second floor.

The fourth floor is designed as a destination for wine tasting, dining and cultural activities; there will also be a roof garden with outstanding views of Paphos in the front and a stunning mountainous landscape in the back.

The fourth floor and rooftop have been designed specifically with the aim of opening the winery up to the public, thereby providing the possibility for visitors to get to know the people and products behind Makkas Winery. This space will also give us the opportunity to organise events, including workshops and seminars, related to the fascinating process of making wine.

Visitors to the winery will even be given the chance to stay on site, as the new design includes rooms and hosting facilities. Offering accommodation will also enable us to welcome key partners and industry experts to the winery, which will help us foster great business relationships.

As Cyprus is a popular tourist destination, the innovative new winery is expected to attract more and more visitors each year, while also enabling us to increase sales and further improve the market position of Makkas Winery – both at home and abroad. Through the use of modern techniques, we are therefore able to shine the light on the ancient beauty that is Cypriot wine.