In spite of a series of social and economical difficulties, the Lebanese banking sector remains one of the main pillars of the country’s economy 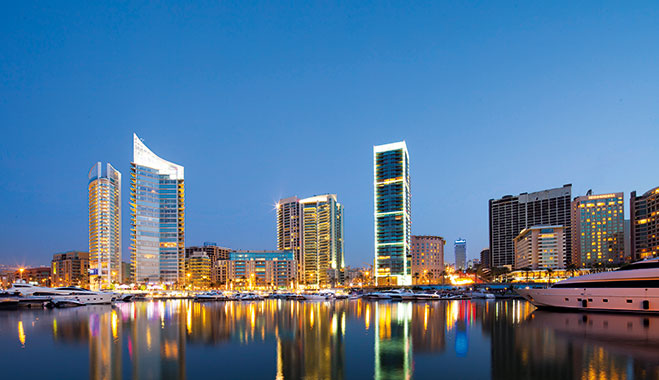 Impacted by the uncertainty that continues to loom over the surrounding region, the current outlook of the Lebanese economy seems blurred. Nevertheless, despite all these challenges, Lebanon has maintained positive growth, albeit at a lower rate than in previous years.

In fact, amid a prolonged political stalemate caused by a two-year presidential vacuum and paralysis within the executive and legislative branches, challenges for the Lebanese economy have been considerable. Likewise, the high influx of refugees instigated by the fallout of the war in Syria, the security challenges triggered by mounting regional tension, and a lack of reform in public institutions and investment infrastructure have also taken their toll on the economy.

Within this context, Lebanon’s real economic growth has undergone a gradual decrease over the past five years to reach a rate of one percent in 2015, marking a significant slump from its previous nine percent average rate recorded in the years 2007–10 (see Fig. 1). The recent economic slowdown mirrors weakened investor sentiment and a change in consumer confidence, which have been challenged by the rising uncertainty in view of the delicate political and social conditions locally and regionally. As a matter of fact, the fertile soil for healthy economic growth in Lebanon depends on political stability and favourable security conditions within the country and its surrounding region. Once these conditions are met, economic activity is expected to rebound and move on a higher-growth path.

An economic anchor
Characterised by high liquidity and solid capital adequacy, the Lebanese banking sector plays a pivotal role in sustaining the country’s economy by simultaneously funding the public deficit and a very dynamic private sector.

While other vital sectors have unfortunately taken a back seat amid unstable domestic conditions and prolonged regional disturbances, the banking sector continues to exhibit a recognised ability to weather domestic shocks and withstand risks initiated by regional developments. Over the past five challenging years, banking sector assets have witnessed an average annual growth of 7.6 percent and private sector deposits have grown at an average annual rate of 7.2 percent, while loans to the private sector have recorded an average annual growth of 9.7 percent.

In fact, the progress realised by the banking sector can be attributed to several factors. First, the sheer size of the banking sector, with assets in excess of 360 percent of Lebanon’s GDP. This domestic growth of assets has been further enhanced by Lebanese banks’ expansion, mainly into the Middle East and Africa.

Secondly, banking sector activity is driven by core customer deposits, which constitute the main source of funding and account for around 82 percent of total liabilities, reflecting the stable funding source with low reliance on capital markets. The large deposit base is accredited to the widely diffused Lebanese diaspora that remain loyal to the Lebanese banks. In 2015, the World Bank estimated inflows of remittances to Lebanon at $7.2bn – a figure equivalent to 14 percent of the country’s GDP – ranking Lebanon as the 16th largest recipient of remittances globally and the second highest among Arab countries.

During the same period, non-resident private sector deposits, which mostly belong to Lebanese citizens living outside Lebanon, grew by five percent annually despite the fragility of the conditions that dominated the political and economic scenes. The resident private sector deposits also grew by the same annual rate. This aspect underpins the confidence both the Lebanese diaspora and residents have in the banking sector.

Highly liquid and well capitalised
The strength of the Lebanese banking sector is largely attributable to its liquidity, capital adequacy and stringent regulatory foundation. Banks in Lebanon remain highly liquid with a private sector loans-to-deposits ratio of 32 percent (recorded at year-end 2015), indicating the ample liquidity available within the sector. Moreover, loans to the private sector constituted 94 percent of Lebanon’s GDP in 2015, as banks were the main financial intermediaries supporting the needs of the private, as well as the public, sectors.

In terms of capitalisation, Lebanese banks have exceeded the requirements of Basel III with a ratio of 14.4 percent recorded in 2015, both exceeding the global standard and the minimum requirement set by the Central Bank of Lebanon (BDL).

Banks in Lebanon conduct their activities within a rigorous regulatory framework and under close supervision, operating under the jurisdiction of BDL and the Banking Control Commission. BDL has been instrumental in supporting the banking sector and reinforcing its role and position. Through its sound governance and stringent rules and regulations, it has shielded the Lebanese banking sector from major financial crises and set forth a solid foundation for prudential banking activity in the country. Besides, through its large foreign reserves base and gold holdings, BDL has long been able to absorb adverse shocks with the potential to negatively impact the Lebanese economy.

Furthermore, BDL has played an influential role in pushing the economy forward by launching incentives to stimulate lending activity in important sectors, while simultaneously enhancing spending power and social wellbeing of Lebanese consumers. BDL also introduced incentives to support unexplored opportunities that lie within certain sectors, such as the knowledge economy as well as SMEs, with the aim of encouraging investment in these sectors, thereby promoting overall economic growth.

Sustained growth and performance
Despite the volatile political and economic environment that has been present in Lebanon and neighbouring countries in recent years, Bankmed sustained its growth momentum throughout 2015, capitalising on a prudent strategy, a balanced-risk approach and sound corporate governance. In fact, the bank’s diversified business model and its expansion into regional markets have positively stimulated its healthy progression. Over the past five years, Bankmed’s net profit increased by a cumulative average growth rate of six percent, with a cumulative growth of seven percent for the bank’s total assets. As per Bankmed’s 2015 financial results, the bank’s net income increased by 4.2 percent to a record $139m, while its total consolidated financial position stood at $15.6bn at the end of the year. According to the bank’s balance sheet, loans reached $5.1bn, while customer deposits were recorded at $12.1bn. As such, the loans-to-deposits ratio stood at 42.1 percent, while the provisions coverage ratio exceeded 159.4 percent, indicating Bankmed’s rigorous strategy in safeguarding its assets.

On the expansion front, Bankmed’s strategy has always been based on selectivity and prudence. The bank pursued a well-planned regional expansion in parallel with its locally driven growth objectives. In this regard, Bankmed has been focusing on identifying opportunities in markets that have sustainable growth potential, such as: Turkey, where the bank was one of the first MENA entrants into the market; Saudi Arabia, where the bank operates an investment banking arm; and Iraq, where the bank conducts activities through three branches in Baghdad, Basra and Erbil.

Driven by the success it has realised in regional markets, Bankmed and its fully owned subsidiary MedSecurities established a presence in the Dubai International Financial Centre (DIFC) in 2015. Through this step, the bank became the first bank in the MENA region to operate in the DIFC under a category 1 license, the most comprehensive license granted by the Dubai Financial Services Authority.

As for MedSecurities, it received a category 3 license, which entitles it to address the evolving needs of customers and to offer a wide range of financial services within a world-class regulatory framework. Moreover, Bankmed’s presence in the UAE enhances the synergy created by the bank’s group throughout the region.

Moving forward, Bankmed will continue to seek rewarding opportunities in the local and regional markets. In addition, positive developments in the political scene and economic conditions in Lebanon and the region at large will provide banks in the country – in general and Bankmed in particular – with great growth opportunities.