As the two largest producers of cocoa globally, Ghana and Côte d’Ivoire have partnered up to form a ‘chocolate OPEC’. The pairs’ ambitions of lifting cocoa farmers out of poverty, however, may be little more than an empty promise 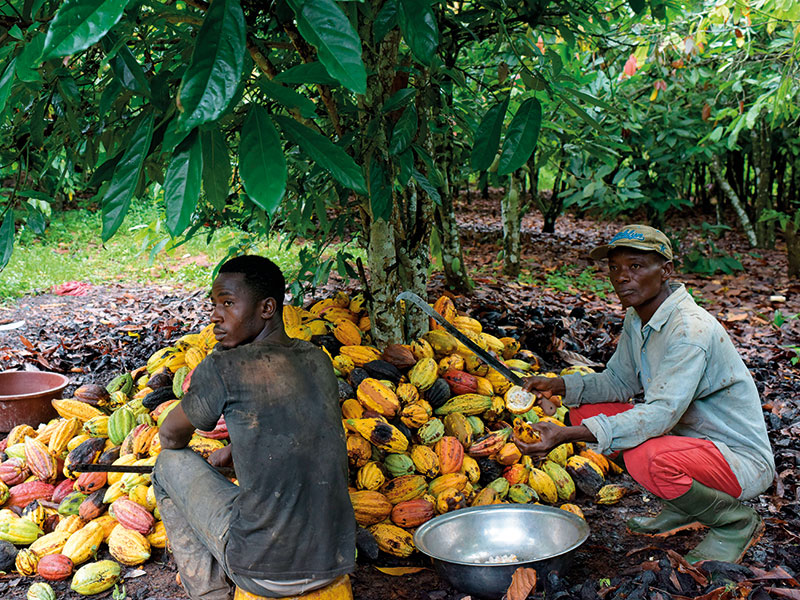 To bring cocoa farmers out of poverty and give them a more equitable share of the profits, Ghana and Côte d’Ivoire announced in June 2019 that they would be hiking up the price of their cocoa
Featured | Markets
Author: Charlotte Gifford

The Aztecs were one of the first civilisations to cultivate cocoa, drinking it as a thick, bitter liquid. They believed the beans had medicinal properties and were a gift from Quetzalcoatl, the god of wisdom. Although it’s lost much of its spiritual significance since then, cocoa remains a coveted foodstuff. Unfortunately, the indulgent image the commodity evokes in modern consumers is a far cry from the bleak reality of West Africa’s cocoa farms.

The global cocoa supply chain is one of vast inequality. Roughly two thirds of the world’s cocoa comes from just two countries (see Fig 1) – Ghana and Côte d’Ivoire – but cocoa-producing nations have traditionally captured just 12 to 13 percent of the industry’s $100bn-plus value chain. This disparity hits West Africa’s two million farmers the hardest: for their backbreaking labour, the average African farmer makes just $0.78 a day from cocoa, according to the Cocoa Barometer 2018. A recent Fairtrade Foundation report found female cocoa farmers are paid even less, taking home as little as $0.23 per day.

To bring cocoa farmers out of poverty and give them a more equitable share of the profits, Ghana and Côte d’Ivoire announced in June 2019 that they would be hiking up the price of their cocoa. “We will not continue to be victims or pawns of the global cocoa industry that is dependent on the work of our farmers,” Ghanaian President Nana Akufo-Addo said after the proposal was announced.

From October 2020 onwards, every tonne of cocoa from Ghana and Côte d’Ivoire will come with a $400 living-income premium. Whether farmers will benefit from the move remains to be seen. A bitter taste
International chocolate companies have little choice but to accept the premium. “Because of the size of these two countries and the scale of their production, it is pretty much impossible for people to avoid,” Jonathan Parkman, Joint Head of Agriculture at Marex Financial, explained to World Finance. “You can’t substitute two thirds of the world’s cocoa for something else. Certainly not in the short term.”

Publicly, chocolate brands have backed the move. Barry Callebaut and Nestlé confirmed they would pay the premium, with the latter commending the decision in a statement. It read: “The [living-income differential] will help improve farmers’ living income and complement all our efforts to improving the lives of farmers.” But behind closed doors, they may have been shaking their fists. For confectioners that rely on West African cocoa, the new premium means a spike in production costs. Martin Hug, CFO at Lindt & Sprüngli, warned in January that the whole industry faced higher input costs as a result of it.

“To put it into perspective, [from] where the market was at the time that [the premium] was announced, that’s something like a 20 percent rise,” Parkman said. “The total extra cost for the cocoa supply chain is about $2bn. Those are costs that the industry will have to meet. Now, that will, I imagine, eventually find its way down to the consumer.”

As Parkman explained to World Finance, the $400 premium makes Ghanaian and Ivorian cocoa a riskier investment. Chocolate manufacturers, processors and traders use the cocoa futures market to hedge their bets, but these companies can’t hedge the new premium and, consequently, can’t mitigate its risk.

“Previously, if you’d been transacting with Côte d’Ivoire or Ghana, the premium above the futures price that you’ve been asked to pay would be relatively small, and consequently manageable,” Parkman explained. “This is escalating that risk dramatically.” As a result, Ghana and Côte d’Ivoire’s premium could call into question how effective the use of the futures market is in mitigating risk within the industry.

Chocolate’s dark side
To understand whether or not the premium could meaningfully improve farmers’ profits, it’s important to first understand why poverty is so endemic to the West African cocoa industry. According to the International Cocoa Initiative, the majority of farmers in Ghana and Côte d’Ivoire are self-employed, operating farms of two to five hectares. These small-scale farms have relatively low yields, providing an average of 0.42 tonnes of cocoa per hectare. Lower yields mean slimmer profits for farmers.

At the same time, the long maturation period of the cocoa bean means that families can experience long stretches with little to no income. Unable to afford to pay adult workers, many farmers resort to using child labour. The Bureau of International Labour Affairs, an operating unit of the US Department of Labour, estimates that two million West African children engage in hazardous work on cocoa farms, including slicing bean pods open with machetes and carrying heavy sacks of cocoa.

One 2019 study cited by The Washington Post found that raising the amount paid to farmers by 12 percent could eliminate the worst forms of child labour in Ghana, but farmer advocacy groups aren’t convinced the new premium will yield such results. Sako Warren, Secretary-General of the World Cocoa Farmers Organisation, told Lumina Intelligence in 2019: “We don’t think having a fixed ceiling is the answer… We are more concerned about how farmers will get that money.”

Moreover, even if the premium can increase farmers’ wages, it is only a short-term solution to a systemic problem. “This doesn’t address the basic issue that exists within the cocoa chain, which is that most cocoa that’s produced in the world is produced from smallholders and the yield is relatively low,” Parkman explained to World Finance. “So this isn’t doing anything to prevent the relatively poor use of land to produce a product. What we really need to see is expanding yields, so we’re not using more virgin forest or rainforests or anything like that.”

No more sugar-coating
At a recent cocoa industry gathering, Ghanaian Vice President Mahamudu Bawumia said he was excited to create what he called ‘COPEC’ – an intergovernmental cocoa organisation inspired by the global oil cartel OPEC. With only two members, COPEC is certainly smaller than OPEC, which has 14 members, but it is a commodity cartel nonetheless.

Unfortunately for Ghana and Côte d’Ivoire, the success of such groups has been limited at best. In the 20th century, several cartels tried – and failed – to control the global price of certain products, including the International Tin Council (ITC) and the International Coffee Agreement. OPEC is considered to be more or less the only success story.

Mark LeClair, a professor of economics at Fairfield University and author of International Commodity Markets and the Role of Cartels, told World Finance that a group must fulfil several criteria to be considered a cartel. First, it should have only a handful of producers to facilitate negotiations. “Coffee, with 50 producing nations, failed this condition,” LeClair pointed out.

A cartel should also have significant barriers to entry, while the commodity itself should be non-perishable, without any close substitutes. “[Otherwise,] if I raise the price of cane sugar, as the sugar cartel did, I end up stimulating the production of a substitute, beet sugar,” LeClair explained. Lastly, the product needs to be homogenous, with only a few different ‘grades’. “Note that cocoa is homogenous, there are a very limited number of major producers, climatic requirements act as a barrier to entry, there are no good substitutes, and it is non-perishable in the near to medium term,” LeClair said. “Hence, cocoa is a good candidate for a cartel.”

But it could still fall victim to the issues that toppled previous such bodies. The ITC was established in the mid-1950s to regulate the price of tin. Member states bought inventory when prices rose and sold it when prices fell. However, a sustained period of high prices enabled Brazil, a non-member, to boost production and flood the market. The ITC ultimately went bankrupt in 1985.

Analysts warn the same could happen to COPEC. “If you get a big increase in farmer income, you’re going to get a correspondingly big increase in production,” Parkman told World Finance. “Introducing an arbitrary premium for [Ghanaian and Ivorian] cocoa is going to incentivise people to use other cocoas as well, for which they’ll pay more money. That’s going to create an incentive globally to produce more cocoa. And so down the road – maybe [in] two to three years’ time – we’re probably looking at significant oversupply. And that could cause a bust scenario.”

In the short term, the premium could positively impact farmers’ wages, but it’s unlikely to tackle the industry’s root problems. What’s more, it could create new issues. On the one hand, the rise in prices could overstimulate production and flood the market, leading to a global price crash and spurring deforestation. On the other, a long-term gap between the floor price and the prices in competing countries could see Latin America – which accounts for almost 20 percent of the world’s cocoa – swoop in and increase its market share.

Another important factor to bear in mind is the political motivation behind this decision, with both Ghana and Côte d’Ivoire holding general elections later this year. As farmers represent a large proportion of the countries’ respective voter bases, the premium may be first and foremost an electoral bid, one that won’t necessarily bring meaningful change to the lives of those it promises to help.