Behind the financial crisis’ banking collapses were a number of once well respected leaders… so where are they now? 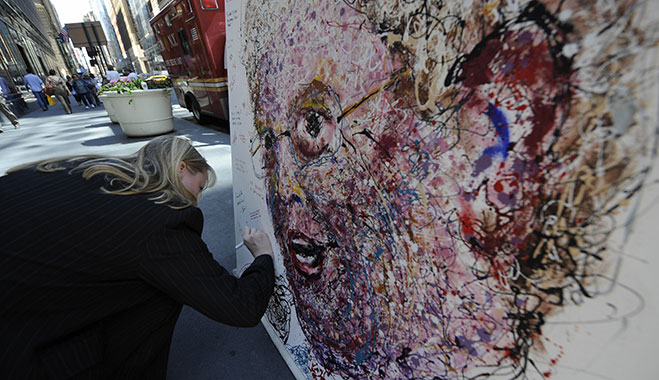 A Bear Stearns employee writes a message on a painting of former CEO James Cayne, who has been named as one of the worst CEOs of all time. Artist Geoffrey Raymond created the painting so employees could express their anger
Banking

When the global financial crisis struck in 2008, many of the world’s most recognisable financial institutions either went out of business or faced staggering losses that they are only just emerging from.

In the years preceding the crisis the leaders of these firms were widely hailed for their shrewd management. Their reputations, however, have since been tarnished so considerably that many have either retired, or even gone into hiding. World Finance takes a look at what happened to some of yesterday’s top bankers.

Perhaps the most high profile casualty of the financial crisis, Dick Fuld oversaw the collapse of Lehman Brothers. He is now seen by some as the face of the crisis, due to his aggressive risk attitude. Fuld remained out of the spotlight since Lehman’s collapse –at one point he became extremely difficult to track down – before briefly taking a seat on the board of New York brokerage and investment banking firm Legend Securities. Presiding over the worst of the UK’s banking failures, such was Fred Goodwin’s fall from grace that after he retired from RBS in January 2009 – shortly before it announced a record loss of £24.1bn – he even had his knighthood for “services to banking” rescinded, an act almost unprecedented. His reputation has been further tarnished by the size of the pension he was awarded after retirement, at the height of the financial crisis. Not as high profile as the others, but Countrywide’s former CEO Angelo Mozilo is possibly the only person that got remotely close to being prosecuted for his activities during the financial crisis. Accused of large-scale selling millions of dollars worth of personal stock while publicly encouraging shareholders to buy back stocks to bolter the share price. He settled with the SEC for $67.5m and was banned from serving as a company director, after retiring. Former CEO and Chairman of Merrill Lynch, Stanley O’Neal’s numerous leadership roles at the firm before his appointment in 2003 should perhaps have prepared him for the emerging crisis. However, the crumbling performance of Merrill Lynch under his watch led to his removal in 2007, and the company’s fire sale to Bank of America the following year. Perhaps learning from his failures, he now sits on the board of aluminium producer Alcoa. The architect of the collapse of Bear Stearns, former CEO James Cayne had run the firm since 1993. Cited as one of the worst US CEOs of all time by a number of news outlets, Cayne had a stake in the company worth $1bn, which he proceeded to mostly lose during the 2008 collapse. He sold his stake for just $61m and retired. He was also known for his alleged drug use, being described by former Bear Stearns chairman Alan C Greenberg as a “dope-smoking megalomaniac”.