Despite facing the challenges of a nation in transition, Max Myanmar has proven responsibility and sustainability can play a part in the development of Myanmar’s transforming economy 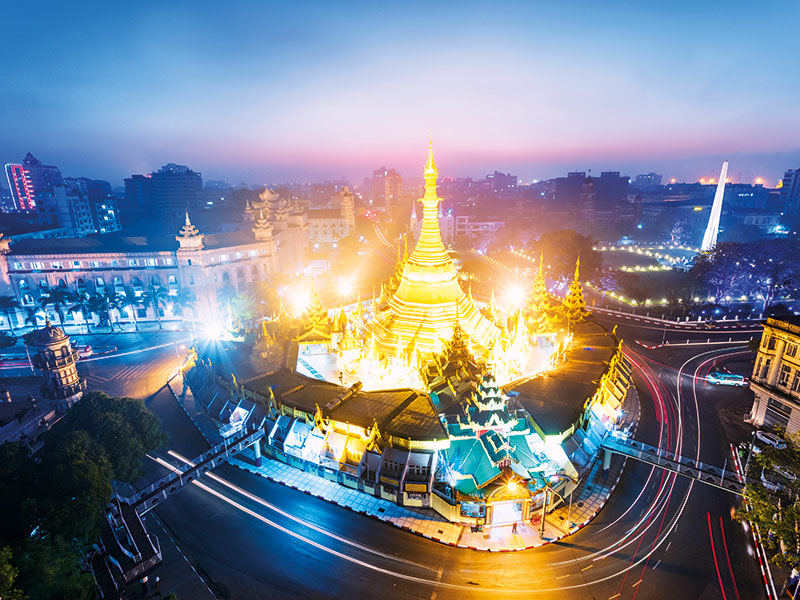 As one of the world’s fastest growing economies, Myanmar’s digital revolution has presented an exciting window of opportunity in a very promising marketplace. Following years of economic stagnation, Myanmar’s fiscal development continued to lag behind that of its south-east Asian neighbours. The country’s low per capita GDP – largely a result of its low level of labour productivity – has remained around 70 percent less than the average of seven other Asian economies. However, with a vast reserve of natural resources, a young population, an excellent geographical location and an impressive level of digitalisation, Myanmar has the intrinsic assets and highly supportive external environment from which it can build.

Resource-rich
According to the McKinsey Global Institute, Myanmar currently ranks 46th in the world in terms of proven gas reserves; and with 12.25 million hectares, it possesses the 25th largest endowment of arable land in the world. In addition to its wealth of land, Myanmar has access to great volumes of natural gas and oil, and houses 10 times the water endowment per capita of both China and India. Well regarded as the global leader in the production of rubies and sapphires, Myanmar also boasts 90 percent of the world’s jade production.

Yet, by diversifying its set of sectors through a combination of compelling growth plans and effective implementation – 85 percent of Myanmar’s economic output currently comes from agriculture, manufacturing, infrastructure, energy and mining alone – Myanmar has the potential to more than quadruple the size of its economy by 2030, to more than $200bn.

However, a failure to do so would rapidly dispel the goodwill and cautious optimism currently surrounding the nation.

In order to achieve its economic potential, Myanmar must maintain political stability, resolve ethnic conflicts and sustain the current momentum surrounding its political and economic reform – all the while easing the practice of business. Ultimately, the country must sustain credibility, with the government’s ability to manage change fundamental. As well as maintaining the speed and course of change, the government must quickly develop a cadre of skilled and talented officials who can navigate the country. The triple transformation on which Myanmar has embarked – towards democracy, peace and a market economy – is as demanding a reform agenda as a country can aspire to implement.

In general terms, Myanmar is likely to follow in the footsteps of other resource-rich frontier markets – such as Mongolia and Kazakhstan – channelling its investments into commodity extraction and infrastructure in order for commercialisation. This certainly presents numerous green-field opportunities across the entire infrastructure spectrum: from constructing road networks, railways, ports and airports to oil, gas pipelines and power plants, too. One such example is Dawei Special Industrial Zone, which is expected to develop around $8.6bn worth of infrastructure projects in the coming years – including a deep-sea port, a coal-based power plant and a number of rail and pipeline links. With Myanmar aspiring to maintain its status as a commodities-driven market, oil and gas will feature prominently as productive capacity moves up the value chain into processing and refining.

While Myanmar’s potential is widely recognised, business operations in transitional countries are often challenging. Growth and investments are needed in order to contribute to the country’s economic development, and in order to attract investors, both the country and the businesses themselves must project an air of stability. Myanmar – in connection to its Buddhist roots – has a rich culture of established private and corporate philanthropy, with donations often made to Buddhist institutions and charitable causes. While socially very rewarding, this practice often hinders a company’s ability to remain competitive, and in turn diminishes its economic stability. It is therefore important to ensure growth is in the interest of all parties, acting in both a responsible and inclusive way. In light of this, Myanmar has initiated a number of comprehensive reforms – including the process of democratisation – in order to restore political and economic stability after decades of military oppression.

Inclusive growth
With an eye on Myanmar’s future, Max Myanmar seeks a better way of doing business – achieving market leadership through exceeding the expectations of its employees, customers and local communities. Be it internal business processes, customer service or community relations, Max Myanmar’s proactive approach is a critical factor towards ensuring growth for everyone. Since the company’s inception in 1993, the Max Myanmar Group has greatly diversified its offering – with energy, hospitality, construction, manufacturing, agriculture and highway maintenance now at the heart of the business. With an ambitious and a vibrant restructuring programme in place, Max Myanmar strives to transform into a group of companies that operate internationally, while upholding only the best business practices.

Through its continual restructuring, the Max Myanmar Group has become a leading institution with transparency, responsibility and good corporate governance at its core. At Max Myanmar, we ensure all our contractors, subcontractors and partners adopt our group policies on human rights, child labour and Occupational Health and Safety (OHS).

more water per capita than India and China

of the world’s jade production

Max Myanmar also prides itself on its engagement within the community; offering structured career development to all employees, creating local job opportunities, and offering support to younger generations through the implementation of part-time job programmes. Moreover, Max Myanmar often invites local communities to participate in some of its training programmes – such as firefighting and OHS.

In a bid to prioritise not only people, but the environment as well, Max Myanmar follows all relevant environmental legislation and regulations, striving to minimise – and ultimately prevent – the pollution of land, air and sea. Max Myanmar also actively participates in workshop programmes relating to environment engagement, as well as reforestation projects throughout the country.

Max Myanmar therefore strives to be an environmentally responsible organisation that ensures the future growth and development of any community it interacts with. With a staunch commitment to our consumers, the community and the environment, we operate our business in a socially responsible and environmentally sustainable manner. As part of this aim, Max Myanmar plans to adopt the ISO 14001:2004 Environmental Management System within its sustainable policy in the near future.

In keeping with our mission, the Max Myanmar Group has remained as committed to corporate social responsibilities (CSR) today, as it was when first established in 1993. The company has carried out CSR activities across the education, health, sports, youth development and disaster management sectors for over 20 years, and is determined to continue well into the future. The Ayeyarwady Foundation – founded in 2010 – was formed in order to oversee this very objective. In addition to its responsible business practices, Max Myanmar endeavours to participate in a number of philanthropic activities, all geared towards improving the well being of the Myanmar people. As a result, the Ayeyarwady Foundation has donated over MMK 59bn ($45.46m) in order to aid the development of a number of sectors throughout the country.

Under the guidance of Chairman U Zaw Zaw, AYA Bank has engaged with the Ayeyarwady Foundation to front all of its CSR activities since 2010. As the first bank in Myanmar to become part of the United Nations Global Compact (UNGC), AYA Bank redesigned its corporate policies in order to incorporate all 10 UNGC principles into its business operations.

Changing climate
In an economy as dynamic as Myanmar’s, there are a number of variables to consider when investing in a responsible, inclusive and sustainable business strategy. Despite all the challenges faced by a country in transition, it is possible to operate responsibly – so long as social and environmental policies are implemented in a way that engages stakeholders and ensures any development is ultimately in the interest of all people.

Max Myanmar continues to participate in the country’s reform process under the auspices of the new democratic government, its business partners and other local organisations. Despite already being regarded as a pioneer in Myanmar, Max Myanmar hopes its strong corporate identity will establish the group as the business of choice for years to come.