Set adrift by tough government policies, one of South Korea’s ‘too big to fail’ conglomerates has done exactly that. Now, public scrutiny has turned towards other chaebols 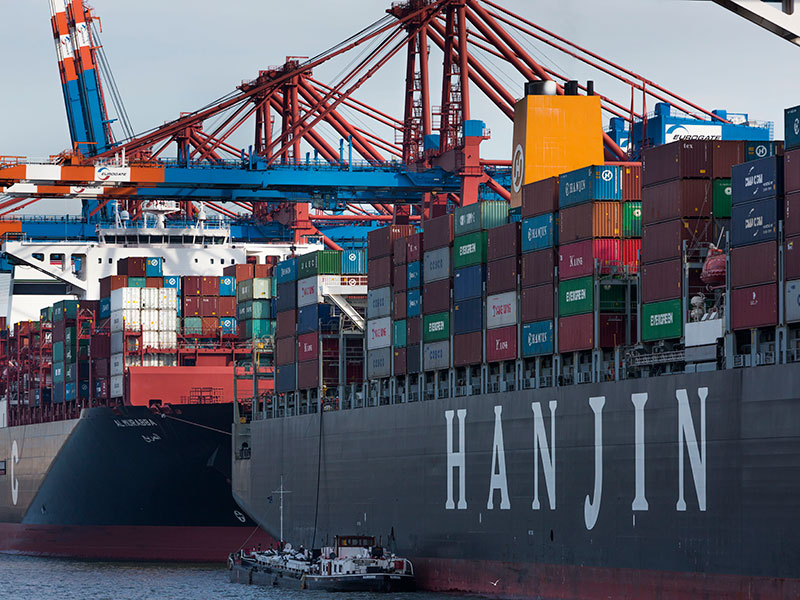 Ever since South Korea’s Hanjin Shipping filed for bankruptcy protection on August 31, there has been trouble at sea. Currently, around 85 Hanjin vessels remain in maritime limbo, turned away from global ports due to their inability to make charter payments. As a result, more than $14bn in cargo is stranded at sea, while crews aboard the marooned ships are forced to watch their food and water supplies dwindle.

Over the past month, as Hanjin floundered, the wider shipping industry has also been battling against rough waters. The demise of the world’s seventh biggest container carrier has understandably had a grave impact on the sector, sending freight rates skyrocketing and prompting a flurry of shipment re-bookings. In the wake of this crisis, some experts have even suggested that Hanjin is to shipping in 2016 as Lehman Brothers was to finance in 2008.

Chaebol culture
Just as Lehman Brothers was thought to be ‘too big to fail’, Hanjin had previously been deemed too economically viable to ever fall into bankruptcy. However, struggling to remain profitable in the midst of a global shipping downturn, the indebted firm turned to the South Korean Government for financial aid earlier this year.

Eager to rescue a crisis-stricken Hanjin, the state-run Korea Development Bank invested a substantial KRW 1trn ($910m) in the shipping line. It soon became all too apparent, however, that this sum would fail to save Hanjin, as the troubled conglomerate began to crumble under the weight of its KRW 5.6trn ($5bn) debts. Faced with this reality, the South Korean Government quickly adopted a hard line with the firm, terminating its financial support with immediate effect.

This new tough stance towards Hanjin marks something of an unusual political move. Seoul has a long history of providing financial support to the nation’s largest conglomerates, with this close relationship between politics and big business having emerged as a hallmark of South Korean economics. By suddenly severing ties with one of the nation’s most powerful ‘chaebols’ (large family-run business conglomerates), the government may be set to shake up a decades-old business culture.

Chaebols first rose to prominence in the early 1960s, when the South Korean Government began to collaborate closely with corporations in order to modernise a stagnant post-war economy. “Everyone is familiar with the economic rise of South Korea and the Miracle on the Han River”, said Kyle Ferrier, Director of Academic Affairs and Research at the Korea Economic Institute of America, referring to the nation’s period of remarkable economic growth following the Korean War.

Ferrier continued: “It simply couldn’t have been done without these conglomerates. These chaebols helped to pool resources and develop Korea from an agrarian economy to a low-tech manufacturing economy, and finally to the high-tech heavy industry economy it is today.”

After decades of receiving state-sponsored credit and assistance, chaebols emerged as economic heavyweights by the 1980s, turning the nation’s 1985 trade deficit into a trade surplus by 1986. By the time the East Asian financial crisis gripped South Korea in 1997, many firms had grown so exponentially that their collapse would have threatened to topple the entire South Korean economy.

While several smaller conglomerates buckled under the strain of the financial crash, the largest chaebols emerged from the crisis with their economic power consolidated and strengthened, thanks to the elimination of their weaker rivals.

In the years since, these sprawling family-run conglomerates – including global brands such as Samsung, Hyundai and LG – have continued to dominate South Korea’s economy. Currently, Samsung alone is responsible for around 20 percent of South Korea’s GDP, while its closest rival Hyundai Group accounts for a further 12 percent. Meanwhile, those at the helm of these vast dynasties enjoy unprecedented political sway, often moving freely between top government jobs and high-ranking corporate positions.

While this unique business structure has until now allowed conglomerates to thrive, chaebol culture could well be under threat as the government watches Hanjin slowly sink.

A sinking ship
The demise of Hanjin unquestionably proves that chaebols are not too big to fail, as perhaps previously thought. In refusing to offer the struggling shipping line a financial life raft, the government is sending others a clear message: a transitional South Korean economy is prepared to withstand the loss of such a huge business empire.

As a government-funded financial safety net is no longer guaranteed for chaebols, Hanjin’s collapse may serve as something of a warning for South Korea’s business giants

As a government-funded financial safety net is no longer guaranteed for chaebols, Hanjin’s collapse may serve as something of a warning for South Korea’s business giants. Ferrier explained: “It signals to other chaebols that just because they’ve had such a long-standing importance to the Korean economy, that doesn’t mean that they will necessarily receive special treatment from the government.”

In recent months, two of the nation’s biggest conglomerates have also been rocked by crises: in late August, the Vice President of Lotte was found dead in an apparent suicide, just hours before he was due to be questioned over corruption allegations. Samsung, meanwhile, had $14bn wiped off its shares in early September, following a botched global recall of its erratically explosive Galaxy Note 7 smartphone.

To add to Samsung’s financial woes, a vast supply of its goods and parts – to the value of around $38m – is currently stranded on Hanjin’s ill-fated ships. Furthermore, a rescue operation for this cargo would cost the company a further $8.8m in alternative transport fees. As Samsung’s marooned shipment ironically goes to show, the oft-interconnected fates of chaebols mean that the financial ruin of one conglomerate can easily spell trouble for another.

This spate of misfortunes befalling South Korea’s all-powerful conglomerates has led some experts to once more reassess the role they play in the nation’s economy. For some time now, a somewhat chaebol-sceptic President Park Geun-Hye has put economic democratisation at the top of her political agenda. Understanding all too well the dangers of monopolies, the Park-Geun-Hye administration is attempting to diversify the economy and encourage competition – and taking centre stage are SMEs, which account for 99 percent of South Korean businesses.

“The government has been trying to create a stronger domestic economy by pushing these SMEs”, Ferrier told World Finance. “In January this year, it also created a $66bn fund for establishing a new Korean Silicon Valley, to encourage tech start-ups and innovation.”

Despite government initiatives to foster a more competitive, creative economy, true reform of chaebol culture will require a shift in cultural attitudes. “In South Korea, working for a chaebol is seen as a sign of stability – a sign of economic and personal success for an individual”, explained Ferrier. Quite simply, there is a level of prestige attached to working for a chaebol that gives them the cultural edge over SMEs.

As the shockwaves from Hanjin’s collapse begin to reverberate around the South Korean economy, public scrutiny of chaebol culture will be unavoidable. An increasing hostility towards the nation’s once-revered conglomerates has been growing of late, especially as multinational chaebols continue to move operations overseas, employing ever-fewer domestic workers. Now, with the government-backed rise of SMEs promising an alternative to absolute chaebol dominance, the tide might slowly be turning for South Korean business culture.